Operation Ajax, headed by Kermit Roosevelt was the CIA's first large scale regime change operation - the first of many. It was initiated by the 1951 announcement of Mohammad Mosaddegh that he intended to cut the Seven Sisters oil profits by nationalising their operations in Iran.[1] It was approved by President Eisenhower on July 22, 1953.[2] 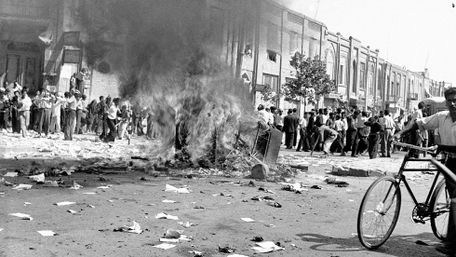 "A communist newspaper's office equipment is burned in the streets of Tehran on August 19, 1953, during the pro-Shah riot that swept through Iran's capital. After a day of fighting, Royalist forces triumphed and Prime Minister Mohammad Mossadegh was ousted. A declassified CIA document acknowledges that the agency was involved in the coup."[3]

For almost 50 years the official narrative was that MI6 and the CIA had nothing to do with the coup, which changed in 2000 when the US Secretary of State Madeleine Albright openly referred to the US role in the coup.[Where?] After 60 years, the CIA released documents which admitted that "The military coup... was carried out under CIA direction as an act of US foreign policy".[4] It would be more correct to admit that it was "covertly organised by MI6 and the CIA"[5]. Averell Harriman went to Iran to negotiate an Anglo-Iranian compromise, asking the Shah's help; his reply was that "in the face of public opinion, there was no way he could say a word against nationalisation".

The coup's trigger is generally agreed to have been the nationalisation of the oil industry announced by Mohammad Mosaddegh in 1951. Charlotte Dennett notes that the coup was planned since this date and so the role of the Seven Sisters should not be underestimated.[6] As with the ensuing 1954 Guatemalan coup d'état, US "national security" appears to have overlapped very largely with the private commercial interest of the rich elite who were in a position to command the CIA. To see the coup as organised by MI6 or the CIA is therefore probably a mistake.

The now leaked report of the 1954 Bilderberg meeting noted that "Americans saw that firm Western action in Persia... had produced successful results and they therefore believed in continuing a firm policy."[7]