From Wikispooks
(Redirected from Censored)
Jump to navigation Jump to search

Censorship is the removal of particular pieces of information. It is an age old propaganda technique.

US President John F. Kennedy elegantly articulated the official narrative of the time when he stated "The very word “secrecy” is repugnant in a free and open society; and we are as a people inherently and historically opposed to secret societies, to secret oaths and to secret proceedings."

An official (albeit contentious, and still openly debated) addendum to this narrative suggests that nation states are justified in using increasing censorship to protect their citizens against terrorists. Since the launching of the "war on terror" the concept of "national security" is being ever more widely used to prevent both the publishing of information by individuals and the withholding of information gathered at public expense by government bodies.

In the time of the cold war, the censorship of information by the governments east of the iron curtain was widely understood. Censorship in Western nations was more subtle. Often, a public system of censorship existed, but was rarely used. Since 1912, for example, UK has operated a system of censorship called the D Notice system to muzzle the commercially-controlled media. While officially optional, this is nevertheless fairly effective in practice allows the government to censor material. Australia started a similar system in 1952. This has provided a first line of cover for more extensive, clandestine, systems of censorship - such as the CIA's Operation Mockingbird, active since the 1950's.

The internet in general has proved a problems for old censorship models. Its non hierarchical nature, together with the fact that information flows so freely, have presented an unsurmountable challenge to those seeking to censor information. Wikileaks, for example, has published material which governments have tried to censor with D Notices. 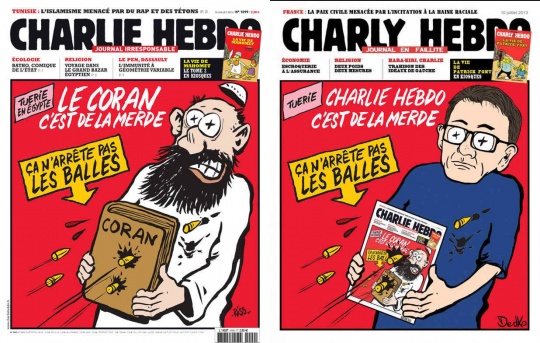 Left (legal), a Charlie Hebdo cover of July 2013, released after Egyptian protestors were killed after the military coup.
Right (illegal "defense of terrorism") posted on the net after the Charlie Hebdo shooting.[1]

There is a fundamental contradiction between freedom of speech and censorship. If people should be free to express whatever ideas they wish, then others should not be free to censor them. The commercially-controlled media has failed to face up to this. In January 2015, less that a week after freedom of speech was celebrated in the wake of the Charlie Hebdo shooting, dozens of people were arrested in an act of mass censorship by the French government.[1]

Concern about mass surveillance by intelligence agencies such as the NSA will undoubtedly encourage some people to self-censor what they post online, an effort which is supplemented by many nation states that have sought to explicitly curtail free self-expression on the internet.

While the commercially-controlled media emphasises the internet censorship carried out by China, censorship is perhaps just as common in Western "democracies" and in the US and the UK it is rampant - Scotland Yard reported in 2014 that they were removing thousands of posts a week.[2] Commercially-controlled media regularly remove comments which breech "guidelines" - such as seriously questioning the official narratives that big media seeks to promulgate.

Censorship by search engines is less obvious than removal of social media posts, but some engage in subject-specific blocking of particular websites. As of January 2018, a page from ISGP was in the top 10 results of Yahoo,[3] Bing[4], Yandex,[5] Gigablast[6] and DuckDuckGo][7] for the search term "Dutroux affair". By contrast, the page was not in Google's top 100 hits, and was not mentioned in the 81 results of StartPage for this phrase — although other searches revealed that StartPage had indexed that page.

Some UK T.V. series have been bought but never broadcast (for example, the episode of Secret Society about Margaret Thatcher's arms secret committees[8] of the film Conspiracy Of Silence about the Franklin child prostitution ring). Others were broadcast but have been subject to attempts to suppress them ever since. Central TV's archive of Roger Cook's investigative documentary series, The Cook Report, was destroyed in a fire at a warehouse run by 'secure storage' firm Iron Mountain.[9] 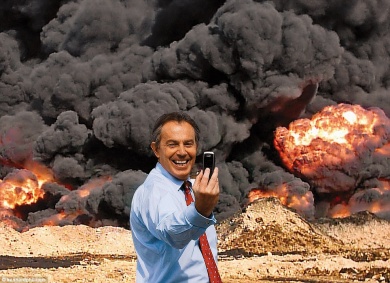 In 2013, the Imperial War Museum North in Manchester chose the iconic 2005 anti-war collage Photo-Op (right) for a poster campaign to promote a new exhibition about modern art and war. However, two of the UK's biggest advertising companies (who together controlled about 60% of the UK outdoor advertising market in 2011) refused to carry the image. CBS Outdoor, one of companies, told the BBC that the poster was refused after consultation with the Committee of Advertising Practice, which advises firms on whether ads may breach its code of conduct, which forbids adverts likely to cause "serious or widespread offence", while it told the authors that they could not use images involving explosions on public transport. [10]

Bonnie Faulkner's Guns And Butter was summarily removed from KPFA in 2018 after an interview with Alan Sabrosky.

Several government facilities are subject to permanent photography bans (such as, for example, passport control). In US, a temporary "order of protection" was used to jail a peaceful protester, Mary Anne Grady Flores, for a year after she photographed an anti-drone protest outside a military base near her home.

In December 2017, officials of the CDC were prohibited from using 7 words in official documents being prepared for 2018. The prohibited words were: “vulnerable,” “entitlement,” “diversity,” “transgender,” “fetus,” “evidence-based” and “science-based.”[11]

The censorship industry is growing in size.