The Deepwater Horizon drilling rig explosion and subsequent fire on the Deepwater Horizon offshore drilling unit, which was owned and operated by Transocean and drilling for BP in the Macondo Prospect oil field (about 40 miles/64 km southeast off the Louisiana coast). The explosion and subsequent fire resulted in the sinking of the platform. The same blowout that caused the explosion also caused an oil well fire and a massive offshore oil spill in the Gulf of Mexico which is considered the largest marine oil spill in the world, and the largest environmental disaster in U.S. history.[1] 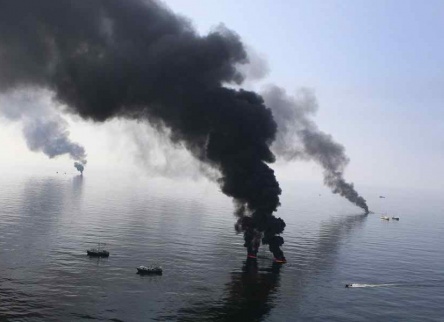 A 2010 'controlled burn' of oil off the Louisiana coast.

The disaster was brought about by:

The disaster exposed a major failure of the federal agency empowered to regulate the oil drilling industry (Minerals Management Service). Regulators and employees of the companies they were meant to control repeatedly engaged in parties and interpersonal relationships with each other, often resulting in a lack of actual regulation. Employees of the regulatory agency often moved through a revolving door, at times working for the agency while at other times working for the oil companies. In the end, Secretary of the Interior, Ken Salazar, issued a secretarial order to break up MMS into several regulatory agencies with very narrowly defined roles and duties.[2] 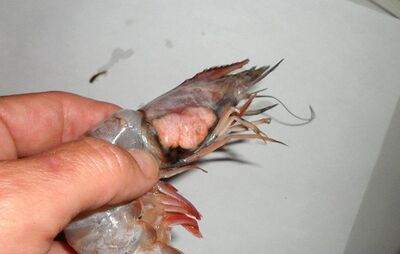 Deformed shrimp with black tissue were common at the time.[3][4][5]

Officialdom played down the severity.

The oil spill impacted the marine life heavily in an area (and still does)[6][7] which is reliant on fishing; in the US,[8] as well as in Mexico.[9]

CNN reporting in 2019 had an article with the headline: "Crabs and shrimp are flocking to the Deepwater Horizon spill site to mate, and it's making them sick",[10] that behavior is possibly due to them confusing a toxin released by the oil (or other chemicals used) with a hormone that attracts mates.[11]

Commercially-controlled media reporting in 2010 was mostly clueless when it came to point out the obvious health hazards.[12] Some reported on questions that were raised about official findings.[13] US government agencies declared the seafood from the disaster zone safe in 2015.[14][15]

The oil spill was treated with "Corexit", a chemical that was declared safe at the time, but wasn't.[16][17] Some say the chemical was used to clear the disaster zone visually, but brought about additional burden on the enviroment.[18]

In July 2015 BP reached an $18.7bn settlement with the US government, the states of Alabama, Florida, Louisiana, Mississippi and Texas, as well as 400 local authorities.

BP’s cost for the clean-up, environmental and economic damages and penalties has exceeded $54bn.