★ Start a Discussion about this document
Backing the Wrong Horseman

Nobody knows how many people died as a result of the UK/US Coalition of Death led destruction of Iraq, Afghanistan, Libya and, by proxy, Syria and Yemen. Nobody even knows how many people western forces themselves killed directly. That is a huge number, but still under 10% of the total. To add to that you have to add those who died in subsequent conflict engendered by the forced dismantling of the state the West disapproved of. Some were killed by western proxies, some by anti-western forces, and some just by those reverting to ancient tribal hostility and battle for resources into which the country had been regressed by bombing.

You then have to add all those who died directly as a result of the destruction of national infrastructure. Iraq lost in the destruction 60% of its potable drinking water, 75% of its medical facilities and 80% of its electricity. This caused millions of deaths, as did displacement. We are only of course talking about deaths, not maiming. This very sober analysis from Salon makes a stab at 2.4 million for Iraqi deaths caused by the war.[1]

The number of Iraqi casualties is not just a historical dispute, because the killing is still going on today. Since several major cities in Iraq and Syria fell to Islamic State in 2014, the US has led the heaviest bombing campaign since the American War in Vietnam, dropping 105,000 bombs and missiles and reducing most of Mosul and other contested Iraqi and Syrian cities to rubble. An Iraqi Kurdish intelligence report estimated that at least 40,000 civilians were killed in the bombardment of Mosul alone, with many more bodies still buried in the rubble. A recent project to remove rubble and recover bodies in just one neighborhood found 3,353 more bodies, of whom only 20% were identified as ISIS fighters and 80% as civilians. Another 11,000 people in Mosul are still reported missing by their families.

For a vivid illustration, here is a photo of Sirte, Libya, after it was kindly “liberated” by NATO aerial bombardment. NATO carried out 14,000 bombing sorties on Libya. 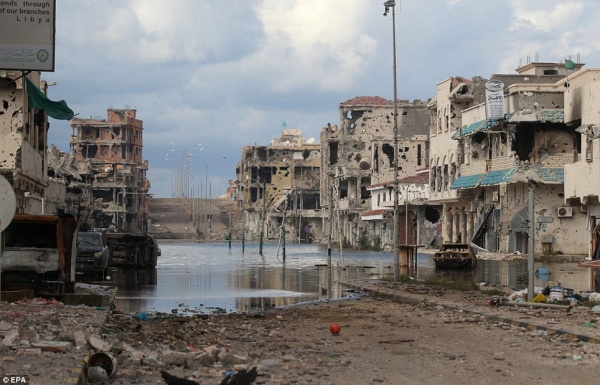 The neo-con drive to dominate the Middle East, in alliance with Saudi Arabia and Israel, has caused an apocalyptic level of death and destruction. It really is very difficult indeed to quantify the number of people killed as a direct result of the policy of “liberal intervention” in these countries. Bombing people into freedom has collateral damage. There are also the vast unintended consequences. The destruction of Afghanistan, Iraq, Libya and Syria launched a wave of refugee migration which led to political instability throughout Europe and contributed to, among many other consequences, Brexit.

For the purposes of argument, I am going to put an extremely conservative figure of 5 million on the number of people who died as a result of Western military intervention, direct or proxy, in the Middle East.

Or put it another way. The total number of deaths from coronavirus in the UK so far is about half the number of civilians killed directly by the US military in the single city of Mosul.

Makes you think, doesn’t it? There are four horsemen of the apocalypse, and while of course I do not blame people for focusing on the one which is riding at them personally, do not forget the others. Coronavirus has not finished killing. But then nor have western wars.

The sight which I cannot stand is the mainstream media which cheered on the horseman of war as they argued for the invasion Iraq on the basis of lies – and still defend it as a “liberation” – who now pretend massive concern for human life. The hypocrites are disgusting.[2]

I was wrong when I initially wrote about the coronavirus.

Before I detail where I was wrong, let me say where I believe I was right. Large general population sampling antibody studies are now just beginning to emerge, and I feel reasonably confident that I was in fact correct that the mortality rate of coronavirus is under 1%, and probably not too different from the 0.5% generally quoted for Hong Kong flu. The term “Infection Fatality Rate” (IFR) is now being used to describe this true mortality rate. The “Infection Fatality Rate” is the percentage of those who get the disease who die.

These are very early days for whole population sampling antibody studies, and the true picture should become more plain over the next month or two. I must say I have found it alarmingly difficult to explain to people the rather simple concept that you cannot infer a mortality rate among everybody who catches the disease, from the results you get when by definition you have only been offering tests to the most acute cases presenting as needing serious treatment. Of course a fair proportion of the worst cases don’t make it through the disease. But there is a population of millions in the UK (and nobody has a serious idea how many) who have had the disease with no or mild symptoms, and who do not figure in the statistics.

The very large majority of people in the UK who have had coronavirus have never been tested. That is simply true. How many, nobody knows. That is also true.

I do not endorse the extrapolation from New York to the UK, in this Daily Mail piece,[3] to try to calculate how many people may have had coronavirus in the UK. But buried in there is the best collection I can find anywhere of what sampling antibody studies are indicating for the “Infection Fatality Rate” across various US and European locations, and there is a strong clustering under 1%.[4] Now these are preliminary studies, though almost all from reputable institutions. Proper, large scale, antibody testing programmes to produce peer reviewed and authoritatively published studies are on the way, but not here yet. I repeat, though, that I think the infection mortality rate is somewhere below 1%.

Where I was wrong, was in not realising that what is different about this disease from a flu is that it is really very, very contagious. So a far higher percentage of the population get it, all at once. Over two seasons, only about 30% of the UK population got the Hong Kong flu. Unchecked, it seems this coronavirus can spread very much quicker than that. I do not know why, but it appears that it can. So the lockdown policies to prevent health services being overwhelmed are needed and do have my support.

I do not however support the level of alarmism and panic. Of course the disease is really appalling for those who get it badly. It is a painful, protracted and terrifying experience. But a similar level of scrutiny of extreme illnesses of other kinds would bring similar stories. I have had three brushes with death in my own life.

In 2003 I had multiple pulmonary emboli (bloodclots in both lungs), which left me in a coma for days, was incredibly painful and I understand very similar in terms of experience to the end phase of this coronavirus. In 1986 I was actually declared dead in a hospital in Kaduna, Northern Nigeria (salmonella paratyphoid B), and was woken up on a morgue trolley by a cockroach eating my nostril. In 1974 I had emergency surgery for peritonitis, and was in hospital for 5 weeks and then a convalescent home. Retailing the experience or images of any of these illnesses would be as capable or more of generating the terror being created by the detailed coverage of extreme cases of coronavirus.

Yes the coronavirus is horrible if you get it badly. Almost all severe disease is horrible and death very seldom consists of peacefully stopping breathing, despite Hollywood. I wonder if having lived so much in Africa has changed my attitude to death. We do not see death much in the UK. Did you know the British have a 350% higher propensity than the Italians to put their elderly into care homes? That is why the deaths in Italy were so much more visible, even though the truth is that the UK government is doing not significantly better, and quite probably worse, than the Italian government, at containing the virus. It is only now making a start at adding English care home deaths to the official statistics (Scotland has for weeks).

I do support lockdown, I do support every sensible precaution being taken because the virus is so contagious. I utterly deplore the vast quantities being spent on war, the $220 billion being squandered on Trident missiles while the most basic precautions stockpiling against the much more real threat of a pandemic were not undertaken, because Tories begrudged spending a few millions on the NHS. I get all of that and I repeat it. But we must not be panicked into believing that the threat is greater than it is. You have approximately a 99% chance, (still nobody knows for certain) of surviving this disease if you catch it. If you are under 60, your chance of death is almost certainly at worst 1 in 500 if you catch it. If you are older or like me have heart and lung issues, it looks a bit bleak. But we are not immortal, nor would I wish to be.

But remember this. Your odds of survival are massively better than were those of a civilian in a country that your country chose to invade in recent years. Did you, personally, do enough to try to stop that?

Remember, there are other horsemen.

Unlike our adversaries including the Integrity Initiative, the 77th Brigade, Bellingcat, the Atlantic Council and hundreds of other warmongering propaganda operations, this blog has no source of state, corporate or institutional finance whatsoever. It runs entirely on voluntary subscriptions from its readers – many of whom do not necessarily agree with the every article, but welcome the alternative voice, insider information and debate.

Subscriptions to keep this blog going are gratefully received.