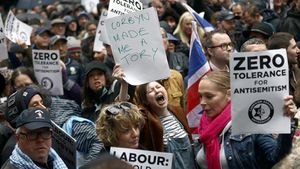 ★ Start a Discussion about this document
Labour & ‘anti-Semitism’: Real goal of establishment smear campaign is to deny socialists power

After three years of screaming headlines, the truth about anti-Semitism in the Labour Party is finally revealed.

There have been 673 allegations of anti-Semitism by Labour Party members and, since the new general secretary started a crackdown on this issue back in April 2018, 296 members have either been expelled, sanctioned, or have resigned. Some 227 have been cleared of these accusations, and 150 cases are still under investigation, according to The Guardian.

Even if all of those 150 turn out to be guilty of anti-Semitism, it will still mean that just 0.08 percent of Labour’s half-a-million members have said or tweeted something anti-Semitic. This clearly shows the allegations that Labour is institutionally anti-Semitic are just not true. So, how did this all come about?

Following the election of Jeremy Corbyn as Labour’s leader, I was doing interviews about whether we could win the next general election, as I was one of the few members prepared to defend Jeremy. Until February 2016, I was not asked whether there was anti-Semitism in the party. Indeed, since I joined the party in February 1969, I never heard anything anti-Semitic and was only aware of one racist comment in 1970 when a party member denounced the song ‘Young, Gifted and Black.’ A few weeks later, he resigned from the party.

It was only when the election of the NEC’s youth delegate started that the issue of anti-Semitism arose. Supporters of the right-wing candidate claimed that the pro-Corbyn candidate was in the Oxford Labour Club, an organisation in which there had been incidents of anti-Semitism.

In a BBC radio interview at 9am, I was asked whether what Hitler did was illegal. There is no relevance between the horrors of the Holocaust and the current Labour Party, so I dismissed this in a few words by simply saying that, in the 1930s, Hitler had supported Zionism before he went mad and killed six million Jews. I was referring to the agreement signed between the Nazi government and the German Zionist movement in July 1933, in which they agreed to collaborate on migrating German Jews to the British colony of Palestine.[1]

In the three hours following that interview, no journalist contacted me to discuss what I had said. You only have to go on Jerusalem’s Holocaust Memorial (Yad Vashem) website to download details of that agreement and how it operated in the six years running up to World War II. You can also look at the work of Francis Nicosia, the professor of Holocaust Studies at the University of Vermont. After over 40 years researching the Holocaust, he records the support in the Nazi party and the Nazi government for the German Zionist movement.

Three hours later, as I approached the entrance to Millbank studios, I was confronted by the Labour MP John Mann, with a cameraman recording as he shouted that I was a Nazi apologist. Mann then went on television claiming that I had said Hitler was a Zionist.

As I left the studios, I received a phone call saying I was going to be suspended by the Labour Party general secretary. It is absolutely outrageous that the general secretary never phoned me to ask if I had said Hitler was a Zionist. For me, to be suspended for stating a historical fact whilst John Mann was able to smear me and lie about what I had said, but face no action to suspend him, shows that Labour’s disciplinary procedures need massive reform as they ignore the basic principles of justice.

In the two weeks following my suspension, between 30 and 40 Jewish men and women stopped me on the street to say that they knew what I said was true and I shouldn’t give in. Some asked what this was all about, and one woman asked: "Don’t MPs read history?"

Although my suspension was on the front page of every paper (except the Financial Times), not a single radio or television news program interviewed me about what I had said, and no journalist asked to interview me. All I had was journalists asking if I was going to apologise. I asked all of them whether they had checked if what I had said was true. Only one said he had. That same day, I was sacked from my regular LBC radio program and, as these lies went global, virtually every speech I was due to give around the world was cancelled.

Over the next 11 months, the Labour Party disciplinary unit pored over everything I had said and written but, at the opening of my hearing, I was told no-one was suggesting I was anti-Semitic. Of all the allegations that I had said ‘Hitler was a Zionist,’ ‘Jews were like Nazis', ‘It’s not anti-Semitic to hate the Jews of Israel,’ and that ‘Israel should be destroyed,’ not a single one was raised during the hearing because they had found no evidence that I had ever said anything like this. But as it had all gone viral, even the chief of the Board of Deputies in his statement to the House of Commons committee said that for me to have said that Hitler was a Zionist was deeply offensive. Even last year, both The Guardian and the Observer carried stories repeating this lie without bothering to check.

I had told journalists and Labour’s disciplinary unit that in my eight years as mayor, anti-Semitic incidents in London recorded by the police had been cut by 50 percent but under Boris Johnson’s eight years, they doubled. If the media were seriously interested in anti-Semitism, this would be something they would want to investigate. When I became mayor, I met the representatives of the Board of Deputies and we agreed to put on Jewish events that would be open to non-Jews as a way of reducing anti-Semitism. I took similar action with the Muslim, Hindu and Sikh communities of London.

Labour’s disciplinary unit decided to extend my suspension for one year, largely based on the fact that I defended the Labour MP Naz Shah from allegations that she was anti-Semitic.

Shortly afterwards, I met with two senior Labour Party officials who told me that 47 party members had been suspended for tweeting something anti-Semitic. In a party of over a half a million members, that does not indicate institutional anti-Semitism, but Jeremy’s critics continued to ramp up this issue. Following his big increase in the Labour vote at the 2017 election, it became a dominant feature in the Tory media. But for all the allegations of anti-Semitism in the papers, there was almost never any detail of any actual anti-Semitic incidents.

It is not just that I have been accused of being anti-Semitic. I have been accused of being corrupt, alcoholic, violent and of tax-dodging. On the day I became the leader of the GLC in 1981, Thatcher made a speech to Scottish Conservatives saying my plan was to impose on Britain a communist tyranny like those of eastern Europe. Until that moment, no GLC leader had been a national figure. GLC leaders did not even have a press officer because they never appeared in the national media and there was only an occasional mention in the London evening papers. But within 48 hours of Thatcher’s speech, every Tory newspaper allocated a reporter full-time to County Hall.

The Daily Mail brought their war correspondent back from the Middle East and told him he had to file six stories about the GLC every day. Private Eye claimed I had a Swiss bank account into which the dictator Gaddafi had put $200,000. Tory papers ran stories implying that I supported the IRA bombing campaign and my primary loyalty was to the Soviet Union. It’s not possible to get legal aid so it isn’t possible to sue papers that lie and they know this. Tory central office was briefing the press that I had been at a gay party where I had been sodomised by six men. When journalists questioned me about this, I was able to point that I had been in the north of England doing a Labour Party meeting that evening.

The fact is that if you are a genuine socialist, the establishment will do anything to prevent you from coming to power or undermine you while in office. That is what the anti-Semitism campaign has really been about. The trouble is, three years on from my suspension, I still have people asking me why I said Hitler was a Zionist. Like Jeremy, I have learned to live with lies and smears, but what is most worrying about this is the genuine concern and alarm it has caused in a substantial proportion of the Jewish community.

A recent poll showed that about 40 percent of Britain’s Jews believe they may have to leave Britain if Labour wins the next election. Those in the media and the Labour MPs who have gone along with this should be ashamed of the fear they have caused to our Jewish community.