Naseem "Naz" Shah[1] is a Labour Party politician and was elected in 2015 as Member of Parliament for the constituency of Bradford West, gaining the seat from George Galloway of the Respect Party.[2]

“She [Sara Khan] continues to profess she’s independent. Even her book she wrote was in partnership with the Home Office. She has taken Prevent funding. She came out of nowhere after the coalition government without any experience.”
Naz Shah (2018)  [3] 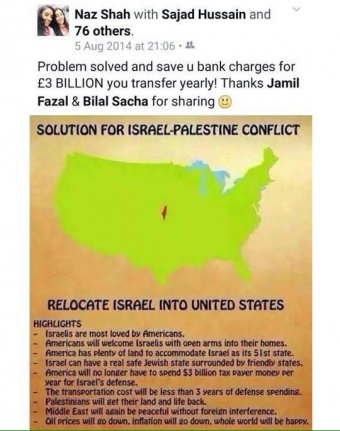 In April 2016, she was suspended from the Labour Party following the emergence of a Facebook post made in 2014 which she had shared supporting the relocation of Israel to the United States.[4] In July 2016, Labour’s National Executive Committee decided to reinstate Naz Shah to the party.[5]

They’re fanning the embers of hate and creating new discord between Jews and Muslims by going after Naz Shah, a Muslim woman who has attained public office. They’re making her pass through these rituals of public self-degradation, as she is forced to apologise once, twice, three times over for a tongue-in-cheek cartoon reposted from my website. And it’s not yet over! Because now they say she’s on a ‘journey’. Of course, what they mean is, ‘she’s on a journey of self-revelation, and epiphany, to understanding the inner antisemite at the core of her being’. But do you know on what journey she’s really on? She’s on a journey to becoming an antisemite. Because of these people; because they fill any sane, normal person with revulsion.

Here is this Muslim woman MP who is trying to integrate Muslims into British political life, and to set by her own person an example both to British society at large and to the Muslim community writ small. She is, by all accounts from her constituents, a respected and honourable person. You can only imagine how proud her parents, her siblings, must be. How proud the Muslim community must be. We’re always told how Muslim women are oppressed, repressed and depressed, and now you have this Muslim woman who has attained office. But now she’s being crucified, her career wrecked, her life ruined, her future in tatters, branded an ‘antisemite’ and a closet Nazi, and inflicted with these rituals of self-abasement. It’s not hard to imagine what her Muslim constituents must think now about Jews. These power hungry creeps are creating new hate by their petty machinations. As Donald Trump likes to say – it’s disgusting.

Labour has now set up an inquiry that is supposed to produce a workable definition of ‘antisemitism’ – which is to say, to achieve the impossible. It’s been tried countless times before, and it’s always proven futile. The only beneficiaries of such a mandate will be academic ‘specialists’ on antisemitism, who will receive hefty consultancy fees (I can already see Richard Evans at the head of the queue), and Israel, which will no longer be in the spotlight. I understand the short-term political rationale. But at some point, you have to say, ‘enough already’. Jews are prospering as never before in the UK. The polls show that the number of, so to speak, hard-core antisemites is miniscule. It’s time to put a stop to this periodic charade, because it ends up besmirching the victims of the Nazi holocaust, diverting from the real suffering of the Palestinian people, and poisoning relations between the Jewish and Muslim communities. You just had an antisemitism hysteria last year, and it was a farce. And now again? Another inquiry? Another investigation? No.

In order to put an end to this, there has to be a decisive repudiation of this political blackmail. Bernie Sanders was brutally pressured to back down on his claim that Israel had used disproportionate force during its 2014 assault on Gaza. He wouldn’t budge, he wouldn’t retreat. He showed real backbone. Corbyn should take heart and inspiration from Bernie’s example. He has to say: no more reports, no more investigations, we’re not going there any more. The game is up. It’s long past time that these antisemitism-mongers crawled back into their sewer – but not before humbly apologising to Naz Shah, and begging her forgiveness.[6]