Document:The attack on Jeremy Corbyn is baseless – there is nothing to support it in the EHRC report 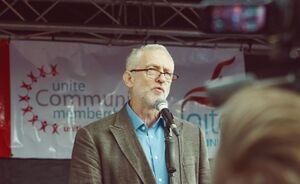 Corbyn speaking in 2016 at Cable Street

The Equality and Human Rights Commission report on complaints of antisemitism in Labour contains no facts to justify Keir Starmer’s outrageous attack on Jeremy Corbyn.

At times it uses strong language in its condemnation of Labour. It found examples of ‘unlawful acts of harassment and discrimination’ for example and ‘inexcusable failures to tackle antisemitism.’

At his press conference, Keir Starmer spoke as if the report was a damning indictment of Labour’s recent record. But there was no discussion of the report’s content. The media focused entirely on the headline claims and repeatedly pushed Starmer on whether he would discipline Jeremy Corbyn, even though there are no specific allegations against Corbyn in the report.

But the strong language of the headline claims are not representative of the overall content of the report.

First of all the report didn’t uphold claims by the Jewish Labour Movement who lodged the original complaint, that Labour is institutionally antisemitic.

Secondly, despite widespread discussion of a systemic problem in Labour, the report found eighteen ‘borderline cases’ and three cases in which it believes the party is responsible for breaking the law over antisemitism. These are the acts of harassment and discrimination mentioned. One of these involved Ken Livingstone’s media comments about Naz Shah MP and two involved a Rossendale borough councillor called Pam Bromley. One instance in which Pam Bromley broke the law according to the report was by posting on Facebook the following:

‘Looks like fake accusations of AS (antisemitism) to undermine Labour just aren’t working, so let’s have Chris Williamson reinstated’.

Third, most of the report is made up of criticisms of the complaints processes in the Labour Party. Here, a number of things need to be drawn out of the detail. The most obvious is that very much contrary to the tone of the reporting the EHRC found that in its opinion things improved in the Corbyn years in a number of ways.

The report found for example that the quantity of cases being examined went up once Jennie Formby became General Secretary of the Labour Party in 2018, backed by Jeremy Corbyn. There was an increase of 242% in the number of anti-semitism cases looked at by Labour NEC panels between 2018 and 2019. In general, the report says ‘there has been an improvement in the rate of determining cases’.

The report does not claim that the Labour Party failed to act in cases where complaints were upheld, it says only that in cases of successful complaints ‘it has been difficult to draw conclusions on whether the sanctions applied were fair and consistent.’

The report makes a great play of leadership ‘interference’ in the complaints process. In 70 cases examined, it found 23 examples. But the report recognises that some involvement in procedures happens in other types of complaint and it also records that in some of these cases the leader's office intervened to ensure that suspensions were imposed. At any rate, the report itself notes that the Labour Party stated that Jennie Formby brought involvement of the leader’s office to an end.

Clearly, there were problems with Labour’s complaints procedures, problems that Corbyn inherited from past administrations. But as Corbyn has said in his response, the report shows that ‘(m)y team acted to speed up, not hinder the process’.

Despite this and despite the report’s recognition that there is not institutional antisemitism in the party, it is being presented by Keir Starmer and the media as a condemnation of the Corbyn years. This shouldn’t be surprising.

Antisemitism is a growing problem in society, and the Labour Party is not immune to it. The party is of course absolutely right to take a hard line against it. Jeremy Corbyn has a record of opposing antisemitism and all forms of racism that are second to none. It was in fact precisely his campaigning and principled approach to politics that got him elected as leader of the party in the first place.

The problem of antisemitism in Labour has, however, consistently been inflated by some of those opposed to Corbyn in an attempt to undermine his leadership and to push back against a growing left which among other things held the Palestinian cause dear. This report has delivered the headlines that Keir Starmer and the media needed to continue the job of vilifying the left. It has failed however to substantiate the claims that are repeatedly made to back up that case.

The whole of the left needs to take a stand now to defend Jeremy Corbyn and his record.