The Equality and Human Rights Commission (EHRC) is a non-departmental public body in England and Wales, established by the Equality Act 2006 with effect from 1 October 2007. The EHRC has responsibility for the promotion and enforcement of equality and non-discrimination laws in England, Scotland and Wales.

The EHRC took on the responsibilities of the Commission for Racial Equality, the Equal Opportunities Commission and the Disability Rights Commission. It also has responsibility for other aspects of equality law: age, sexual orientation and religion or belief. A national human rights institution, it is

The EHRC has offices in Manchester, London, Glasgow and Cardiff. It is a non-departmental public body (NDPB) sponsored by the Government Equalities Office, part of the Department for Education (DfE). It is separate from and independent from Government but accountable for its use of public funds. The EHRC's functions do not extend to Northern Ireland, where there is a separate Equality Commission for Northern Ireland (ECNI) and a Northern Ireland Human Rights Commission (NIHRC), each established under the terms of the Belfast Agreement.[1]

On 12 March 2019, the EHRC launched an investigation into suspected past pay discrimination against women at the British Broadcasting Corporation (BBC):

Following complaints that female employees were not being paid the same as men for equal work, the BBC has voluntarily provided us with a large amount of information about its pay policies and practices.

After looking at all of the information, we suspect that some women at the organisation have not received equal pay for equal work.

We are using our powers under the Equality Act to open an investigation, which will look at whether BBC staff experienced unlawful pay discrimination from 1 January 2016.

We will look at formal and informal pay complaints raised with the BBC by staff to decide if there has been unlawful pay discrimination against women and whether complaints have been adequately resolved.

We hope to finish our investigation by the end of 2019. We will publish a report once the investigation is done, setting out our findings, any action we have taken and recommendations for the BBC.[2]

On 7 March 2019, the EHRC opened an investigation into the Labour Party saying that the party may have "unlawfully discriminated against people because of their ethnicity and religious beliefs" as it announced the first step of a statutory inquiry into Labour's handling of antisemitism complaints.

The action by ECHR follows legal complaints made by Campaign Against Antisemitism and the Jewish Labour Movement last year, which have argued that the party is not compliant with equalities law in dealing with antisemitism.

“It is a sad indictment that the once great anti-racist Labour party is now being investigated by the equality and human rights regulator it established just a decade ago.”

“We completely reject any suggestion the party has acted unlawfully and will be cooperating fully with the EHRC. Labour is fully committed to the support, defence and celebration of the Jewish community and its organisations. Antisemitism complaints received since April 2018 relate to about 0.1% of our membership, but one antisemite in our party is one too many. We are determined to tackle antisemitism and root it out of our party.”[3]

"The British state's efforts to weaponise anti-semitism to oust Jeremy Corbyn from the Labour leadership goes public as the equalities watchdog body opens an investigation. Brace yourselves - this ain't go to end until Corbyn is gone and Watson restores 'order'."[4]

"It is the Labour Party's lynching of black anti-racism activists (and Corbyn allies) Jackie Walker and Marc Wadsworth - both now expelled - that needs investigating by the Equality & Human Rights Commission, not confected anti-semitism allegations."[5]

A leaked internal report shows that the Labour Party’s bureaucrats conspired to undermine their own leader Jeremy Corbyn from the start, even sabotaging the UK/2017 General Election campaign.[6]

It also reveals how Labour’s left-wing leaders came to embrace the right’s witch hunt against members over the manufactured anti-Semitism crisis.[7]

John McDonnell, Labour’s former Shadow Chancellor, said the report was commissioned by General Secretary Jennie Formby and put together by the party’s Governance and Legal Unit. It was due to be submitted to the Equality and Human Rights Commission investigation into antisemitism in the party, but that move was blocked by Labour’s lawyers.[8] 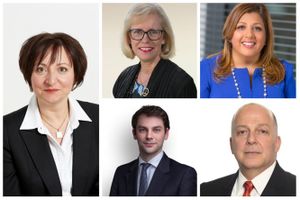 The EHRC Board comprises:

The Chair and Commissioners are public appointments made by the Minister for Women and Equalities. The latest round of appointments was announced in May 2018.

"There is a strong Jewish presence at the top of Britain's equality watchdog. David Isaac, new chairman of the Equality and Human Rights Commission, took up office this week, joining Rebecca Hilsenrath, who was made CEO of the body last autumn."[9]

Six EHRC staff were sacked by email on 9 February 2017 and given a day to clear their desks. Since then another two staff have been dismissed and two Directors are serving their notice. Another member of staff is still at risk of dismissal. Those sacked on 9 February had payment in lieu of notice (PILON) which workers did not agree to because it closes off the opportunity to seek redeployment at the Commission or elsewhere in the civil service.

In a letter the PCS union stated:

"By imposing PILON you are cutting off this option and effectively consigning BME, disabled, women and trade union members to unemployment. There should only be PILON in cases where the individual concerned has agreed to it."

"It's absolutely reprehensible that dedicated staff have been sacked and told to clear their desks with a day's notice. "That this has happened at the government body charged with upholding human rights and fair treatment in our society is an absolute scandal and we will continue to fight it."[10]

In November 2018 the Commission paid compensation to staff #sackedbyemail who were taking unfair dismissal cases to an Employment Tribunal.

This page imported content from Wikipedia on 7 March 2019.
Wikipedia is not affiliated with Wikispooks.   Original page source here
Retrieved from "https://wikispooks.com/w/index.php?title=Equality_and_Human_Rights_Commission&oldid=186514"
Category: