From Wikispooks
(Redirected from Donbass)
Jump to navigation Jump to search

The Donbass (or Donbas) is an historical, cultural, and economic region in south-eastern Ukraine, occupied in part by two separatist states, the Donetsk People's Republic (DPR) and the Luhansk People's Republic (LPR).[1] According to Russian President Vladimir Putin it was vital in deciding in favour of the 2022 Russian invasion of Ukraine, saying the area was in severe distress and with ethnic Russians falling victim to "genocide". 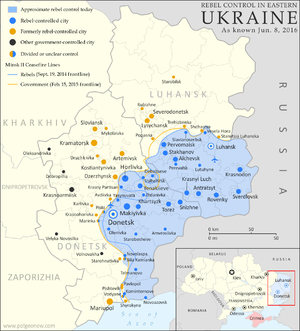 A detailed map with front lines from 2016

Surveys of regional identities in Ukraine have shown that around 40% of Donbass residents claim to have a "Soviet identity".[2] 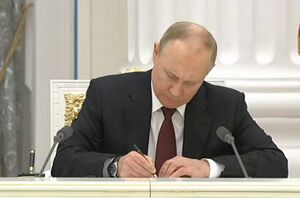 The State Duma voted for the ratification of the treaties unanimously the next day.[5][6]

On 24 February 2022, in a televised address on Russian TV, President Putin said:

"The people’s republics of Donbass have asked Russia for help.

"In this context, in accordance with Article 51 (Chapter VII) of the UN Charter, with permission of Russia’s Federation Council, and in execution of the treaties of friendship and mutual assistance with the Donetsk People’s Republic and the Lugansk People’s Republic, ratified by the Federal Assembly on 22 February 2022, I made a decision to carry out a Special Military Operation.

"The purpose of this operation is to protect people who, for eight years now, have been facing humiliation and genocide perpetrated by the Kiev regime. To this end, we will seek to demilitarise and denazify Ukraine, as well as bring to trial those who perpetrated numerous bloody crimes against civilians, including against citizens of the Russian Federation."[7]

This page imported content from Wikipedia on 19 February 2022.
Wikipedia is not affiliated with Wikispooks.   Original page source here
Retrieved from "https://wikispooks.com/w/index.php?title=Donbas&oldid=242115"
Category: