Eva Bartlett is a Canadian freelance journalist and rights activist with extensive experience in the Gaza Strip, where she lived from late 2008 to early 2013. She arrived by boat as a part of the Free Gaza missions and documented the 2008/9 and 2012 Israeli war crimes and attacks on Gaza while riding in ambulances and reporting from hospitals. An Arabic speaker, Eva accompanied Palestinian fishermen and farmers as they came under intensive fire from the Israeli army.[1]

Eva Bartlett has visited Syria on six occasions since April 2014, twice in a party of mainstream media journalists and four times independently.[2] In December 2016, she addressed a press conference at the United Nations reporting on these visits and speaking against commercially-controlled media propaganda designed to effect regime change in Syria.[3]

On Easter Saturday afternoon 15 April 2017, suicide bombers were reported to have attacked buses carrying civilians from the long-besieged Syrian villages of Kafraya and Foua. The convoy was carrying at least 5,000 people including civilians and several hundred pro-government fighters, who were granted safe passage out of the two Shi'ite villages which are besieged by Western-backed rebels. A witness to the massacre told a Syrian journalist:

“The ‘rebels’ brought a bus full of crisps. They tried to gather as many kids as possible around the vehicle. Then we heard a really loud explosion. A lot of children were killed, many were injured.”[4] 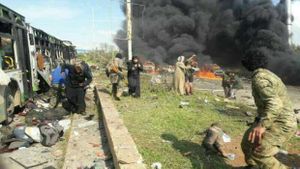 Sharing a video of the incident on Facebook, Eva Bartlett said: "The sadism of western-backed terrorist 'rebels' and their White Helmets apologists knows no limits."

"This is a video of how NATO rebels exploded a suicide car bomb as Kafria & Foua kids were stranded for days, starved, then gathered on purpose to kill maximum number of victims! They succeeded in killing more than 116 kids! Then they sent their White Helmets actors to benefit by manipulating the tragedy to their favour knowing very well that they never set foot in the besieged towns of Kafria & Foua for 4 years simply because no Al Qaeda was there!!

"Surviving eyewitnesses spoke of bad treatments by these terrorist rebels after the blast & before the stage was set for White Helmets! Many confirmed that "rebels" shot at them as they rushed to rescue their families & forced them into designated spots to make room for the White Helmets show!"[5]

On 6 November 2017, James Corbett spoke to Eva Bartlett to discuss her reporting from Syria. They talked about the lies, propaganda and outright fabrications that have attempted to paint the terrorist insurgency as a “civil war” led by “moderate rebels,” including the use of children like Omran Daqneesh and Bana Alabed as unwitting icons for the fake narrative. They also discussed recommended sources for real information about what’s happening in Syria.[6]

Attacked by the BBC 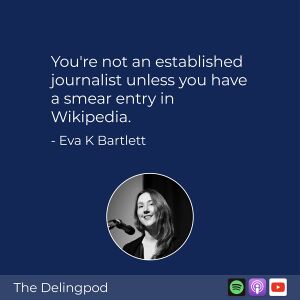 This is the email sent to me by a British state-funded hack who is, btw, such a cowardly hack she hides her Twitter feed.[9]

I have blotted out her email address from her emails to me, but one can easily find it in a google search.[10]

The BBC's Chloe Hadjimatheou has previously sent a similar email to @VanessaBeeley. Vanessa deconstructs that email and the threats the British state-funded hack made against her.[11]

A Document by Eva Bartlett