From Wikispooks
(Redirected from Canadian)
Jump to navigation Jump to search

Canada is a country in North America. Its ten provinces and three territories extend from the Atlantic to the Pacific and northward into the Arctic Ocean, covering 9.98 million square kilometres (3.85 million square miles), making it the world's second-largest country by total area. Its southern and western border with the United States, stretching 8,891 kilometres (5,525 mi),, is the world's longest bi-national land border. Canada's capital is Ottawa, and its three largest metropolitan areas are Toronto, Montreal, and Vancouver.

The country is a Commonwealth realm and is officially bilingual at the federal level. Canada's long relationship with the United States has had a significant and ever growing impact, with an ever growing dominance over its economy, culture, military and politics.

Canada has the seventeenth-highest nominal per-capita income globally and the sixteenth-highest ranking in the Human Development Index. Its economy is the tenth-largest in the world, relying chiefly upon its abundant natural resources and well-developed international trade networks. Canada is part of several major international and intergovernmental institutions or groupings including the United Nations, NATO, the G7, the Group of Ten, the G20, the Organisation for Economic Co-operation and Development (OECD), the World Trade Organization (WTO), the Commonwealth of Nations, the Arctic Council, the Organisation internationale de la Francophonie, the Asia-Pacific Economic Cooperation forum, and the Organization of American States.

Traditionally it was controlled by its old colonial master the United Kingdom, which placed its people in central positions. After World War 2 the US took over the leading position, especially after the regime change against PM John Diefenbaker in 1963. Nowadays, Canada's Deep state seems to be firmly integrated in the Supranational Deep State.

Indigenous peoples have continuously inhabited what is now Canada for thousands of years. Beginning in the 16th century, British and French expeditions explored and later settled along the Atlantic coast. As a consequence of various armed conflicts, France ceded nearly all of its colonies in North America in 1763. In 1867, with the union of three British North American colonies through Confederation, Canada was formed as a federal dominion of four provinces. This began an accretion of provinces and territories and a process of increasing autonomy from the United Kingdom. This widening autonomy was highlighted by the Statute of Westminster 1931 and culminated in the Canada Act 1982, which severed the vestiges of legal dependence on the Parliament of the United Kingdom.

As in the United States, the native population and culture was largely exterminated by the colonists.

This policy continued into the modern era. A little known chapter of Canada's history was exposed by the Rev. Kevin Annett. He estimates that a systematic campaign of genocide, involving child abuse, deliberate infection with smallpox or TB, sterilisation and murder claimed the lives of over 50,000 native Canadians.

25% of Canada's prison population is indigenous Canadians, an ethnic group which makes up around 2% of the Nation's population. 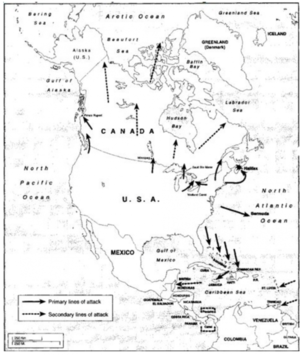 From the late 1920s until the outbreak of World War II in 1939, the US had plans to invade Canada. This included the use of poison gas as an humanitarian action that would cause Canada to quickly surrender and thus save American lives. In March 1935, General Douglas MacArthur proposed an amendment making Vancouver a priority target comparable to Halifax and Montreal. This was approved in May 1935, and in October 1935, his son Douglas MacArthur Jr. began his espionage career as vice-consul in Vancouver. In August 1935, the U.S.A. held its then largest ever peace time military maneuvers, with more than 50,000 troops practicing a motorized invasion of Canada.[1]

A survey by polling firm YouGov of the Canadian population revealed 33% in favor of a Parliamentary review of the 9/11 Commission Report, with 26% neither for nor against, and 19% opposed.[2] Notwithstanding this, when such a petition was delivered by ReThink911 Canada, the Canadian government did not address this point, declaring curtly that it would "not tolerate the waste of taxpayer dollars by studying conspiracy theories".[3] 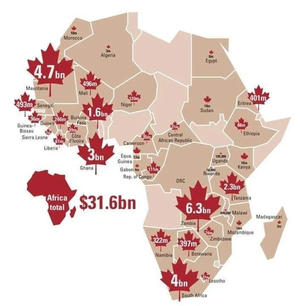 Canada is home to 75% of the world’s mining companies. Present in most countries, Canadian-based or listed firms operate about 4,000 mineral projects abroad, and thus play a big role in supranational deep state.[4]

Cannabis became legal in Canada in October 2017, although still subject to some legal restrictions.[6]

Nuri Katz, founder of Apex Capital Partners terms Canada "the grandfather of the industry" of cash for passports, using the fact that Canadian passports offer visa-free access to more than 100 countries, including the European Union.[7]

On 25 August 2021, there was the first COVID death in the Northwest Territories.[10]

In what bears the hallmarks of a limited hangout, in September 2021 it was revealed that the Canadian military (Canadian Joint Operations Command) had developed and put in place a propaganda plan in April 2020. The campaign called for “shaping” and “exploiting” information, to head off civil disobedience by Canadians during the coronavirus pandemic and to bolster government messages about the pandemic. A separate initiative, not linked to the CJOC plan, but overseen by Canadian Forces intelligence officers, culled information from public social media accounts in the state of Ontario.[11]

In 2020, the Canadian Forces public affairs branch launched a plan that allowed military public affairs officers to use propaganda to change attitudes and behaviours of Canadians as well as to collect and analyze information from public social media accounts. Included among those tactics was the use of friendly defence analysts and retired generals to push military PR messages and to criticize on social media those who raised questions about military spending and accountability.[11]

MPPs (Member of Provincial Parliament) in Ontario have been punished for dissenting.

In Manitoba, provincial legislator Nadine Wilson was expelled from her party in September 2021 for "misrepresenting her COVID-19 vaccination status".[12]

Citizens of Canada on Wikispooks

This page imported content from Wikipedia on 31.08.2021.
Wikipedia is not affiliated with Wikispooks.   Original page source here
Retrieved from "https://wikispooks.com/w/index.php?title=Canada&oldid=228432"
Category: