Gough Whitlam was an Australian politician.

Whitlam became Prime Minister of Australia on 5 December 1972 and quickly began a series of reforms which distanced Australia from UK, its former colonial master, and from USA. Some of his ministers publicly condemned the American’s indiscriminate bombing of towns, civilian targets and dense population centres as corrupt and barbaric. Whitlam also expressed his unhappiness about the Pine Gap spy station in the middle of Australia, spying on everyone including civilians, government and military.[1]

The "Whitlam Problem" was considered such a threat to US hegemony and control over Australia that they dispatched their problem solver of the moment, ‘Coup Master’ Marshall Green, to Canberra as Ambassador.

The deep political milieu, Le Cercle, has been accused of destabilizing Gough Whitlam's government because it opposed a conservative economic agenda.[2][3] 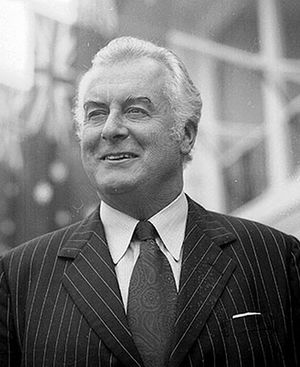