From Wikispooks
< Iraq
Jump to navigation Jump to search

"Iraq has WMDs" was a claim made by the US and UK establishments in the run up to the 2003 Invasion of Iraq, This was later exposed as a deception cooked up by MI6 as part of Operation Mass Appeal for use as a casus belli. The BBC looked at the "45 minutes" [until disastrous WMD use] claim after the event.[1]

“Every war when it comes, or before it comes, is represented not as a war but as an act of self-defense against a homicidal maniac.”
George Orwell [2]

The Dodgy Dossier was a dossier of "sexed up" evidence purporting to show that Iraq had "WMD". It was concocted as part of Operation Mass Appeal by MI6.

As of 2019, no one has been held legally responsible for the lies about Iraq's WMDs. 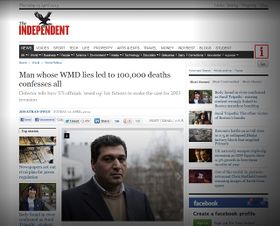 Adnan Ihsan Saeed al-Haideri who stated that he had seen evidence of such weapons programmes at 20 locations.[3]

In 2010 Sundus Shaker Saleh took legal action against some member of the US government who had instigated the invasion, arguing that the casus belli was fraudulent, as. In 2016, the USDOJ refused to accept the Chilcot Report as part of the evidence supporting the lawsuit. In 2017 judge Susan Graber gave the defendants a blanket immunity from prosecution under the Westfall Act.