“No government, no big organization, will pay for the truth. To take a crude example: can you imagine the British Government commissioning E. M. Forster to write A Passage to India? He could only write it because he was not dependent on State aid.”
George Orwell (13 October 1944)  [1]

Eric Arthur Blair (25 June 1903 – 21 January 1950),[2] known by his pen name George Orwell, was an English novelist, essayist, journalist and critic. His work is marked by lucid prose, awareness of social injustice, opposition to totalitarianism, and commitment to democratic socialism.[3][4]

“[A] world in which it is wrong to murder an individual civilian and right to drop a thousand tons of high explosive on a residential area does sometimes make me wonder whether this earth of ours is not a loony bin made use of by some other planet.”
George Orwell (31 December 1943)  [5]

Commonly ranked as one of the most influential English writers of the 20th century and as one of the most important chroniclers of English culture of his generation,[6] Orwell wrote literary criticism, poetry, fiction and polemical journalism. He is best known for the dystopian novel Nineteen Eighty-Four (1949) and the allegorical novella Animal Farm (1945). His book Homage to Catalonia (1938), an account of his experiences in the Spanish Civil War, is widely acclaimed, as are his numerous essays on politics, literature, language, and culture. In 2008, The Times ranked him second on a list of "The 50 greatest British writers since 1945".[7]

Orwell's work continues to influence popular and political culture, and the term "Orwellian" — descriptive of totalitarian or authoritarian social practices — has entered the language together with several of his neologisms, including "cold war", "Big Brother", "thought police", "Room 101", "doublethink", "newspeak" and "thoughtcrime".[8]

Nineteen Eighty-Four may be widely considered pre-eminent amongst Orwell's books. Completed in 1948, it was published in June 1949. Perhaps remarkably for such a pessimistic book, it received immediate critical and popular acclaim. The central character, Winston Smith, works in the Ministry of Truth, censoring pieces of history. While charting his failed efforts at resistance, the novel paints a dystopian picture of a totalitarian future in which a tiny elite pursue (the party) pursue a policy of perpetual war and mass surveillance while seeking to exert an ever tighter control over the minds of the proletariat ("the proles").

“The primary aim of modern warfare is to use up the products of the machine without raising the general standard of living.”
George Orwell [9]

One of the central themes is the use of propagandistic language. The book is full of new words (newspeak), which are used to shape the opinions of the proles.

In December 1947 Orwell was diagnosed with tuberculosis. On 21 January 1950, an artery burst in his lungs, killing him at age 46. 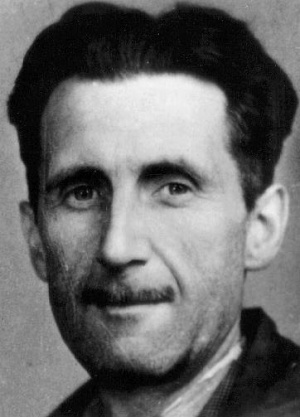 +
Has image2
File:GeorgeOrwell.jpg +
Has nationality
English +
Has nndb
http://www.nndb.com/people/457/000022391/ +
Has noRatings
0 +
Has objectClass
Person +
Has objectClass2
Person +
Has revisionSize
6,263 +
Has revisionUser
Robin +
Has sourcewatch
http://www.sourcewatch.org/index.php/George Orwell +
Has spouse
Eileen O'Shaughnessy +  and Sonia Brownell +
Has wikipediaPage
https://en.wikipedia.org/wiki/George Orwell +
Has wikipediaPage2
https://en.wikipedia.org/wiki/George_Orwell +
Is not stub
true +
Source credit
Wikipedia +
Has subobject"Has subobject" is a predefined property representing a container construct and is provided by Semantic MediaWiki.
George Orwell +, George Orwell +  and George Orwell +