David Aaronovitch is a UK deep state propagandist, broadcaster and author. He is a regular columnist for The Times. He was listed on leaked documents from the Integrity Initiative, but when David Miller asked him about this, he denied any knowledge of or connection to the group, claiming that "after a fairly cursory look it seems pretty obvious that this stuff is forged."[1]

Aaronovitch is the son of communist intellectual and economist Sam Aaronovitch,[2] and brother of actor Owen Aaronovitch and scriptwriter and author Ben Aaronovitch. He has written that he was brought up "to react to wealth with a puritanical pout".[3] 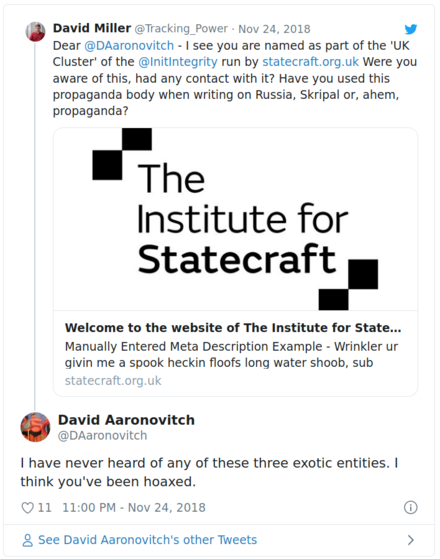 Aaronovitch's name appears in the leaked documents from the Integrity Initiative in 2018. When asked over Twitter whether he knew of or had had contact with Integrity Initiative, Institute for Statecraft or the UK Cluster, Aaronovitch replied "I have never heard of any of these three exotic entities. I think you have been hoaxed."[1]

About the Iraq War WMD lies, Aaronovitch expressed what Robin Ramsay termed a "fine sentiment which seems to have had zero impact on his subsequent thinking and writing"[4]: “If nothing is eventually found, I – as a supporter of the war – will never believe another thing that I am told by our government, or that of the US ever again. And, more to the point, neither will anyone else. Those weapons had better be there somewhere.” [5]

In September 2020 he write that Covid libertarians are a danger to us all.[6]

Because Norman Baker expressed "doubts" about the death of Robin Cook Aaronovitch termed him "a conspiracy theorist".[7]

Aaronovitch was quoted by the BBC as stating that the "the gnashing of teeth over Bilderberg is ridiculous" and that it is "really an occasional supper club for the rich and powerful".[8]

Aaronovitch is author of Paddling to Jerusalem: An Aquatic Tour of Our Small Country (2000) and Voodoo Histories: the role of Conspiracy Theory in Modern History (2009). He won the Orwell Prize for political journalism in 2001, and the What the Papers Say "Columnist of the Year" award for 2003.

In a 2004 hit piece on John Laughland[9], Aaronovitch borrowed most of his points from the website Ukrainian Archive, which has links to all the western-backed "pro-democracy" groups in Ukraine.[10]. This is a pointer that the networks that later became known as the Integrity Initiative already were in place by 2004.

This page imported content from Wikipedia on 26 February 2016.
Wikipedia is not affiliated with Wikispooks.   Original page source here
Retrieved from "https://wikispooks.com/w/index.php?title=David_Aaronovitch&oldid=209707"
Categories: