From Wikispooks
< Lockheed
Jump to navigation Jump to search

The Lockheed bribery scandals is a series of bribes made by officials of the U.S. aerospace company Lockheed from the late 1950s to the 1970s in the process of negotiating the sale of aircraft. The scandals touched several central politicians in West Germany, Italy, the Netherlands and Japan. The corruption was revealed by a US Senate committee led by Frank Church, but several deep state aspects of the cases are still unclear. 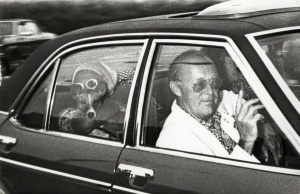 The Dutch Prince Bernhard and Queen Juliana returning from Italy because of developments in the Lockheed scandal. In the back seat Juliana with her dog Sara. The Netherlands, August 26, 1976.

Prince Bernhard received a $1.1 million bribe from Lockheed to ensure the Lockheed F-104 would win out over the Mirage 5 for the purchase contract. The commotion lead to his resignation as Bilderberg Steering committee Chairman and to the only ever cancellation of a Bilderberg meeting.

Dutch Prime Minister Joop den Uyl ordered an inquiry into the affair, while Prince Bernhard refused to answer reporters' questions, stating: "I am above such things".[1] The results of the inquiry led to a constitutional crisis in which Queen Juliana threatened to abdicate if Bernhard was prosecuted. Bernhard was spared, but had to step down from several public positions and was forbidden to wear his military uniforms again.

Prince Bernhard always publicly denied the charges, but two days after his death on December 1, 2004, interviews were published showing that he admitted taking the money. He said: "I have accepted that the word Lockheed will be carved on my tombstone."[2]

Between 1970 and 1975, Lockheed paid Saudi arms dealer Adnan Khashoggi $106 million in commissions. His commissions started at 2.5% + and eventually rose to as much as 15%.

In 1975, former Lockheed lobbyist Ernest F. Hauser told the Senate Subcommittee on Multinational Corporations (led by Frank Church) that West German Minister of Defense (and deep politician) Franz Josef Strauss and his party the CSU had received at least $10 million for the purchase of 900 F-104G Starfighters in 1961. The party and its leader denied the allegations, and Strauss filed a slander suit against Hauser. As the allegations were not corroborated, the panel is dropped its inquiry[4].

In September 1976, in the final phase of the West German federal election, the issue was re-opened when questions were asked about the whereabouts of the "Lockheed documents" within the Federal Ministry of Defence. In the course of investigations, it emerged that most of the documents related to the Starfighter purchase had been destroyed in 1962.

Anonymous sources also distributed several, possibly falsified, documents to the media[5]. According to one of these documents, member of the German Bundestag and its defense council Manfred Wörner accepted an invitation by Lockheed to visit their aircraft plants in the US with the entire trip being paid by Lockheed. Wörner later became Secretary General of NATO.

In October 1975 the lobbyist Christian Steinrücke employed by Lockheed warned Martin J. Hillenbrand, US Ambassador to Germany, against investigating the background of Starfighter procurement, as this could cause difficulties for Franz Josef Strauss:

Investigations by the anti-corruption department showed that Lockheed paid about 1.1 to 1.3 million DM in bribes.

According to statements by former Lockheed seller Paul White, the banker Hermann Josef Abs and Franz Josef Strauss received funds in connection with the sale of Lockheed Super Constellation and Electra aircraft to Lufthansa. Lockheed proceeded in a similar way when selling the F-104:

The scandal involved the Marubeni Corporation and several high-ranking members of Japanese political, business and underworld circles, including Finance Minister (and future Prime Minister) Eisaku Satō and the JASDF Chief of Staff Minoru Genda. In 1957, the Japanese Air Self-Defense Force wished to buy the Grumman F11F-1F Super Tiger to replace the F-86 Sabre then in service, but heavy lobbying by Lockheed of the key LDP figures led to the adoption of the F-104 instead.

Later, Lockheed hired underworld figure Yoshio Kodama as a consultant in order to influence Japanese para-statal airlines, including All Nippon Airways (ANA), to buy the Lockheed L-1011 TriStar instead of the McDonnell Douglas DC-10. On February 6, 1976, the vice-chairman of Lockheed told the Senate Subcommittee on Multinational Corporations (led by Frank Church) that Lockheed had paid approximately $3 million in bribes to the office of Japanese Prime Minister Kakuei Tanaka for aid in the matter.

In March 1976, in a protest at the scandal, actor Mitsuyasu Maeno made a suicide attack on Kodama's Tokyo home by crashing a light aircraft onto it. Maeno died and two servants were injured. Kodama himself was unharmed.[11]

Tanaka was arrested on July 27, 1976, and was released in August on a ¥200 million ($690,000) bond. He was found guilty by a Tokyo court on October 12, 1983 for violations of foreign exchange control laws but not on bribery. He was sentenced to four years in prison, but remained free on appeal until his death in 1993.

The Lockheed scandal in Italy concerned the supply of the C-130 transport aircraft, received by the Air Force starting from 1972. The political-military corruption that was revealed turned into a trial of the government system that had the Christian Democrat Party as its main post-war pillar. The public discussion and the Lockheed trial coincided in time with one of the most dramatic periods in the history of the Italian Republic, the kidnapping and killing of Prime Minister Aldo Moro. In 1978, the President of the Republic Giovanni Leone was overwhelmed by the Lockheed scandal and had to resign. Twenty years later, having verified that the accusations against him for the Lockheed scandal were untrue, the deputies Marco Pannella and Emma Bonino wrote him a letter of apology.[12]

Jack Blum played a central role in the Lockheed Aircraft bribery investigation of the 1970s.