Mark Lombardi was an American neo-conceptual artist who specialized in drawings that document the uses and abuses of power. He is known for the type of drawings he specialised in towards the end of his life, which connected people, events and places. Just as his work started to become popular, he was found hanged. A "sketchy" NYPD investigation concluded he had committed suicide.[1] 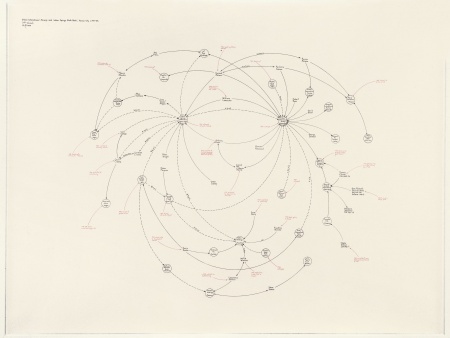 In the early 1990s, Lombardi began researching the conspiracies, including the BCCI, the Harken Energy scandal and the Savings and Loan fraud. He accumulated thousands of index cards that began to overwhelm his ability to deal with them, so to cope, he began assembling them into physical outlines, and then into hand-written diagrams, which he called Narrative Structures.[2] They are structurally similar to sociograms – a type of graph drawing used in the field of social network analysis. His works include:

In early 2000, there was a suspicious flood in his flat after the sprinkler systems were turned on. This nearly destroyed his major work - which connected all his earlier works, and gave a timeline of the conspiracies. He was however able to restore it and exhibit is successfully. On 21 March 2000, Lombardi moved all his work to a new studio. He was found hanged the next day, which was ruled a suicide.

His biographer, Patricia Goldstone is doubtful about this, not least because his work was finally starting to become popular. She describes the NYPD investigation as 'sketchy', noting that they never established the time of death and closed the case within just two days, ruling it a suicide on the testimony of one witness of dubious reliability.

Goldstone notes that he had no history of mental illness or depression and reports that Lombardi's mother described him as absolutely jubilant about the success which his work was just starting to bring him.[1]

Mark Gorton credits Lombardi as one of the three people "who have most succinctly explained the workings of the Bush Crime Family".[3] His death, just as his work was starting to achieve real critical acclaim caused a surge of interest in his work, though some of it is has disappeared into private collections.