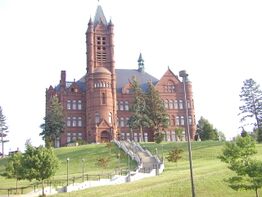 Crouse College, a Romanesque building completed in 1889, housed the first College of Fine Arts in the U.S. It is now the home of the College of Visual and Performing Arts and the Setnor School of Music.

Syracuse University is a private research university in Syracuse, New York. The institution's roots can be traced to the Genesee Wesleyan Seminary, founded in 1831 by the Methodist Episcopal Church in Lima, New York. After several years of debate over relocating the college to Syracuse, the university was established in 1870, independent of the college. Since 1920, the university has identified itself as nonsectarian, although it maintains a relationship with The United Methodist Church.

The campus is in the University Hill neighborhood of Syracuse, east and southeast of downtown, on one of the larger hills. Its large campus features a mix of buildings, ranging from nineteenth-century Romanesque Revival structures to contemporary buildings. SU is organized into 13 schools and colleges, with nationally recognized programs in information studies and library science, architecture, communications, business administration, inclusive education and wellness, sport management, public administration, engineering and the College of Arts and Sciences.

After World War II, Syracuse University began to transform into a major research institution. Enrollment increased in the four years after the war due to the G.I. Bill, which paid tuition, room, board, and a small allowance for veterans returning from World War II. In 1946, SU admitted 9,464 freshmen, nearly four times greater than the previous incoming class. Branch campuses were established in Endicott, New York, and Utica, New York, which became Binghamton University and Utica College respectively.

The velocity with which the university sped through its change into a major research institution was astounding. By the end of the 1950s, Syracuse ranked twelfth nationally in terms of the amount of its sponsored research, and it had over four hundred professors and graduate students engaging in that investigation.

From the early 1950s through the 1960s, Syracuse University added programs and staff that continued the transformation of the school into a research university. In 1954, Arthur Phillips was recruited from MIT and started the first pathogen-free animal research laboratory. The lab focused on studying medical problems using animal models. The School of Social Work, which eventually merged into the College of Human Ecology, was founded in 1956. Syracuse's College of Engineering also founded the nation's second oldest computer engineering and bioengineering programs. In 1962, Samuel Irving Newhouse Sr. donated $15 million to begin construction of a school of communications, eventually known as the SI Newhouse School of Public Communications. In 1966, Syracuse University was admitted to the Association of American Universities, an organization of leading research universities devoted to maintaining a strong system of academic research and education.

Syracuse has had many financial supporters, but some stand out by the size of their contributions, and have thus also shaped the university in their image.