The "Strike Hard Campaign against Violent Terrorism" (严厉打击暴力恐怖活动专项行动, Strike Hard Campaign) is a research project into repressive social control. Run by the Chinese government, it targets the 13 million ethnic Uyghurs and other Turkic Muslims in Xinjiang.

The campaign involves mass surveillance, arbitrary detention, forced political indoctrination, restrictions on movement, and religious oppression.[1] “Credible estimates indicate that under this heightened repression, up to one million people are being held in “political education” camps. The government’s “Strike Hard Campaign against Violent Terrorism” (Strike Hard Campaign, 严厉打击暴力恐怖活动专项行动) has turned Xinjiang into one of China’s major centers for using innovative technologies for social control.” [2]

“The Strike Hard Campaign has shown complete disregard for the rights of Turkic Muslims to be presumed innocent until proven guilty. In Xinjiang, authorities have created a system that considers individuals suspicious based on broad and dubious criteria, and then generates lists of people to be evaluated by officials for detention. Official documents state that individuals “who ought to be taken, should be taken,” suggesting the goal is to maximize the number of people they find “untrustworthy” in detention. Such people are then subjected to police interrogation without basic procedural protections. They have no right to legal counsel, and some are subjected to torture and mistreatment, for which they have no effective redress, as we have documented in our September 2018 report. The result is Chinese authorities, bolstered by technology, arbitrarily and indefinitely detaining Turkic Muslims in Xinjiang en masse for actions and behavior that are not crimes under Chinese law.”
(1 May 2019)  [3] 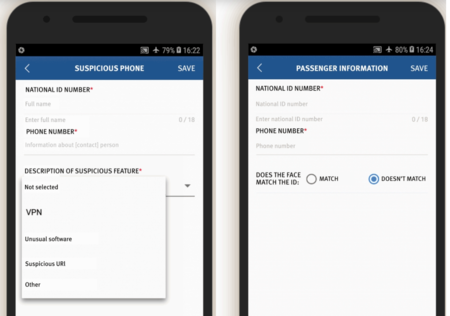 One of the screenshots of the Chinese Police app.

Human Rights Watch obtained a mobile phone app used by the project and used "reverse engineering" to discover the kinds of behaviors and people it targeted. These included a wide range of legal activities, such as use of unusual software (such as VPNs or encryption) on phones, travelling abroad or internally within China. It also suggested that a range of surveillance technologies were used such as facial recognition.