Powers of the UN Security Council include the establishment of peacekeeping operations, the imposition of international sanctions, and the authorisation of military action through Security Council resolutions; it is the only UN body with the authority to issue binding resolutions to member states. The UNSC held its first session on 17 January 1946.

The five permanent members (P5) have the power of veto over the adoption of proposed substantive resolutions. The veto was used extensively by the Soviet Union from 1946 up to 1970, then in the 1980s and 1990s extensively by USA (often to prevent Israel from censure). More recently Russia – which replaced the Soviet Union in 1991 – and China – which became a P5 member in 1971 – tend to deploy their vetoes the most: 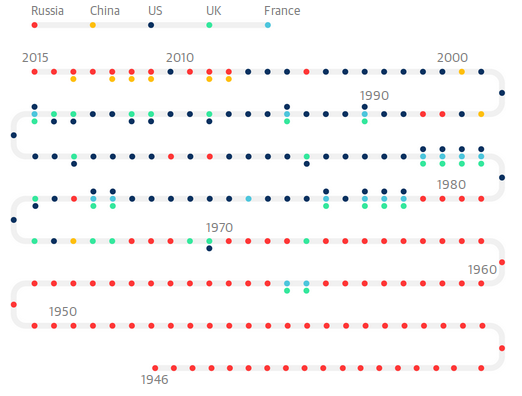 The 5 permanent UN Security Council members were all in the top 6 nations worldwide as regards arms export from 2012-2016.[1]