Ursula von der Leyen is the current President of the European Commission. She served as Minister of Defence for the German Government from 2013 to 2019; where she was cited as running a department characterised by “nepotism” and “incompetence”,[1] with large cushy contract to consultants from McKinsey.

Ursula von der Leyen has been noted as a strong advocate for the formation of an EU Army and advocates for a more aggressive foreign policy for the European Union. [2] In 2021 she was promoting promoting vaccine passports.[3]

Thank you Melinda & Bill for your leadership and dedication! 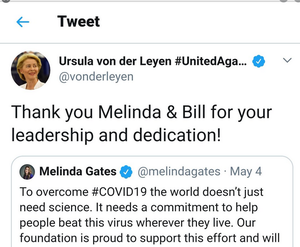 “As Federal Defense Minister, Von der Leyen behaved in the same way as the US President called for an increase in military spending: increase military spending, armament instead of disarmament. And although this minister got into trouble because of her high spending on consulting firms and various personnel decisions and was anything but a role model, she became President of the EU Commission. That is a key function and it is important to the US.

The personnel decision for von der Leyen happened quietly. No sensible person can explain why she was given this important office. A partial declaration showing why: She had the support of important countries from Eastern Europe. The United States has a great influence on these states.

In the first major critical case, Von der Leyen immediately and unequivocally represented the position of the USA: Iran itself is to be blamed for the confrontation in the Middle East and for the execution of the Iranian general. With her, the United States can probably also stake a claim on other occasions and play a key role in shaping the internal structure of the European Union. Ursula von der Leyen is the perfect example of an "agent of influence".”
Albrecht Müller (January 2, 2021)  [4] 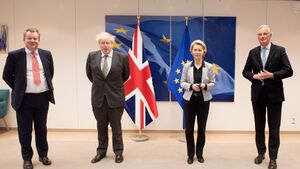 On Sunday 13 December 2020, Ursula von der Leyen said the EU’s relations with the UK are going to be “about new beginnings with old friends”.

She was asked if the two sides could reach a deal with three weeks left before the transition period ends, and future trading would be under World Trade Organization rules.

The President of the European Commission said "there is movement" in the Brexit talks but the UK had the choice to “play by our rules” if it wants "seamless access" to the EU single market, or see “border and tariffs”.[5]