The United States Central Command (USCENTCOM or CENTCOM) is one of the eleven unified combatant commands of the U.S. Department of Defense. It was established in 1983, taking over the previous responsibilities of the Rapid Deployment Joint Task Force (RDJTF). 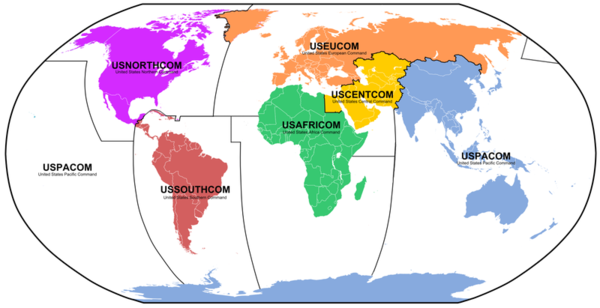 In 2021, Israel was transferred from U.S. European Command (the only non-European nation ever in that category) to CENTCOM earlier this year, there are now twenty-one nations covered by it. The others are Afghanistan, Bahrain, Egypt, Iran, Iraq, Jordan, Kazakhstan, Kuwait, Kyrgyzstan, Lebanon, Oman, Pakistan, Qatar, Saudi Arabia, Syria, Tajikistan, Turkmenistan, thr United Arab Emirates, Uzbekistan and Yemen.

Jay Freres was a State Department liaison for U.S. Central Command at MacDill Air Force Base in Tampa from 2002 to 2007.[1]

For twenty years CENTCOM has waged the bulk of military operations under the rubric of what Washington formerly named the War on Terror, including wars in and strikes against Afghanistan, Iraq, Pakistan, Syria and Yemen.

In April 2021, General Kenneth McKenzie testified before the Senate Armed Services Committee[2] on how he prioritized his command’s concerns: He identified “the four global challenges that manifest across the USCENTCOM AOR [area of responsibility]: China, Russia, Iran, and Violent Extremist Organizations (VEOs).” The last term is a replacement for what until recently would have been deemed terrorist organizations. The raison d’être of CENTCOM had now become its last priority. He also accused China of harboring plans to establish a military presence in the region.[3]