On 22 May 2017, a bombing at the Manchester Arena at the end of a concert by Ariana Grande killed 22 people and injuring 119. The BBC reported that "Salman Abedi was named by police as the suicide bomber shortly after the attack". Police were called to the scene of the bombing at 22:33 local time, along with medical personnel.[1] The Islamic State reportedly claimed responsibility for the attack.[2]

On 27 January 2020, Hashem Abedi went on trial at the Old Bailey in London accused of murdering 22 people and one count of attempted murder encompassing the 260 other victims injured in the terror attack carried out by his older brother, Salman Abedi.

On 17 March 2020, a jury convicted Hashem Abedi after less than five hours of deliberation at the end of a seven week trial at the Old Bailey.[3] On 20 August 2020, the brother of Manchester Arena bomber Salman Abedi was sentenced to at least 55 years in prison for his part in the atrocity.[4]

Campaigning for the #GE2017 was suspended.[5] Labour leader Jeremy Corbyn said it was a "terrible and traumatic time" and it was important to "come together".[6][7]

"One of terrorist leader Abdelhakim Belhadj's mentally challenged "freedom warriors" blew himself up in the middle of women and children in Manchester. These are the drugged animals UK and NATO stupidly gave political and military support in February 2011. And you didn't see this coming?!?"[9] 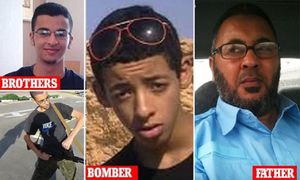 Older brother Ismail Abedi, 23, was arrested in Chorlton on 23 May 2017, a day after the terror attack on Manchester Arena which killed 22 people including seven children. Two weeks later, a spokesman for Greater Manchester police said:

"A 23-year-old man, who was arrested in connection with the investigation into the attack at Manchester Arena has today, Monday 5 June 2017, been released without charge."[10]

On 25 May 2017, the father and younger brother of suicide bomber Salman Abedi were arrested in Tripoli, according to a spokesman for the Special Deterrence Force, a Libyan counter-terrorism force. The father, Ramadan Abedi, was arrested outside his home in the Tripoli suburb of Ayn Zara on Wednesday afternoon. A witness said he was handcuffed by armed men who drove him away in two unmarked vehicles.

Hashem Abedi, younger brother of the suicide bomber, was also detained Tuesday evening on suspicion of links to Islamic State, spokesman Ahmed Bin Salem said. He did not give any details on the reasons why the father was arrested.

Hashem Abedi had been in touch with attacker Salman Abedi, Bin Salem said, and was suspected of planning to carry out an attack in the Libyan capital:

“We have evidence that he is involved in Daesh (Islamic State) with his brother. We have been following him for more than one month and a half. He was in contact with his brother and he knew about the attack.”

Bin Salem said the younger brother Hashem Abedi had travelled from London to Tripoli on 16 April 2017.

Salman Abedi, 22, was born in Britain to Libyan parents. Amber Rudd, Britain’s interior minister, said earlier that he had recently returned from Libya and had likely not acted alone. His father lives in Tripoli.[11]

In an article dated 25 May 2017, the MailOnline reported:

MI6, Theresa May and the Manchester attack

On 30 May 2017, Jonathan Cook published an article entitled "MI6, Theresa May and the Manchester attack":

You would think that, as the reverberations from last week’s Manchester terror attack continue to be felt, the UK media would be scouring through the literal and figurative rubble trying to find leads. After all, is that not what a profit-driven media in a free society is supposed to do?

But in the case of this attack, the corporate media have demonstrated extreme passivity. They have mostly waited for press releases from the government, police and intelligence services. The only things they seem to be chasing are the families of the deceased. (The one exception has been the admirable Peter Oborne, an old-school, maverick journalist who has long written for the right-wing press, including the Daily Mail.)

It is not even as though these pampered journalists need to do much of the leg-work themselves. More and more information has come to light online, from “alternative” news sites like Middle East Eye and Al Jazeera, of the close ties between the British spy agency MI6 and UK-based Libyans, most of them from Manchester.

Back in the late 1990s, MI6 effectively sponsored their trips overseas to become fighters against Muammar Gaddafi. They came to be known as the Libyan Islamic Fighting Group, or LIFG.

After 9/11, the LIFG became a proscribed organisation for its extreme jihadist agenda. But it was back in business with MI6 after 2011 and the Arab Spring. The fighters were encouraged to travel abroad again to help remove Gaddafi, as Libya became the target of yet more western-sponsored “humanitarian intervention”. Salman Abedi, the young man responsible for the Manchester attack, and his father are believed to have been among them. Abedi would have been only 16 at the time.

So where is the coverage of any of this in the corporate media? Why are journalists not reporting or pursuing these leads? Can we really trust the British security services to investigate their own behaviour? Does this episode not raise issues of vital national security?

And who gave the approval for such a policy, one that was bound to radicalise at least some of Britain’s Libyan community and provide them with military training and experience they were certain to bring back to the UK?

And here’s the rub. Because when MI6 began funnelling British-Libyan fighters to Libya in 2011, Theresa May was Home Secretary. May must have known of the MI6 policy and doubtless approved it. And now she is in the midst of a general election campaign. If she loses, Jeremy Corbyn is placed to become prime minister in her stead. That is not a prospect any of the corporate media appear willing to accept, even the supposedly left-liberal elements of it, like The Guardian.

And so the story of MI6 and May, their sponsorship of Islamic jihadism, and the likely “blowback” the UK just experienced in Manchester is a sleeping dog no one seems willing to disturb.

Meanwhile, Corbyn is under assault from May and the corporate media for trying to raise the connection between UK foreign policy and the "terrorism" it has spawned.[13]

For more, check out these stories:

On 1 November 2017, the Daily Mail reported that Assistant Chief Constable Russ Jackson, of Greater Manchester Police and head of the North West Counter Terrorism Unit (NWCTU) had a warrant for the arrest of Hashem Abedi:

"I can now say that, following a review of the evidence by the Crown Prosecution Service (CPS), we have applied for and been granted a warrant for the arrest of Hashem Abedi. The arrest warrant relates to the murder of 22 people, the attempted murder of others who were injured and conspiracy to cause an explosion.

Russ Jackson said the warrant was issued by a judge at Westminster Magistrates' Court in the last fortnight, approved by Home Secretary Amber Rudd and the extradition request handed over to the authorities in Libya.[16]

According to The Guardian, Hassan al-Houni, a spokesman for the internationally recognised government in Tripoli, said:

“An official request has been received through the Libyan ministry of foreign affairs and the Libyan authorities are cooperating to process it in accordance with Libyan legal procedures. No decision has been taken yet.”

Days after the Manchester bombing in May, the Special Deterrence Force (Rada), a counter-terrorism and anti-crime group aligned with Islamic extremist Abdelhakim Belhadj, arrested Hashem Abedi and the brothers’ father Ramadan Abedi. The father was released in August.[17]

The Independent reported that a victim of the 7/7 Bombings, only a few hours after the bombing "Tony Walter, 52, say he took his own life because he “didn’t want to live in a world where these terror attacks continue”... His friends claimed the most recent attack in Manchester, combined with the stabbing at Westminster in March, triggered traumatic memories."[18]