Abdelhakim Belhadj is currently the head of ISIS forces in Libya and leader of the Libyan Islamic Movement, which used to be known as the Libyan Islamic Fighting Group. Formerly, he commanded the Libyan rebel Tripoli Military Council after emerging as a leader during the 2011 NATO bombing campaign when Libyan rebels wrested control of Tripoli from Muammar Gaddafi.[1]

In November 2017, British police requested the extradition from Libya of Hashem Abedi, the brother of Manchester suicide Bomber Salman Abedi, who is being held by Libya’s Special Deterrence Force, a Tripoli-based militia with close ties to Abdelhakim Belhadj. It is understood that Belhadj is delaying Abedi's extradition until his torture case against MI6, former Foreign Secretary Jack Straw and Theresa May's government is resolved.[2]

In April 2019, it was reported that the UK government had spent more than £11m of public funds resisting demands for an apology, compensation and prosecutions over MI6’s 2004 rendition of the Libyan dissident Abdelhakim Belhaj and his wife, Fatima Boudchar. Lawyers for the government were paid £4.4m while those acting for Belhaj and Boudchar received £6.9m.[3]

On the day of Saif al-Islam Gaddafi's arrest in November 2011, he warned his captors about Abdelhakim Belhadj:

"Keep on considering them the good ones and me the liar, but mark my words because I swear to God I did too much good to those two guys and they paid me back with betrayal.
"I assure you that Abdelhakim Belhadj and Ali al-Salabi will not bring any good, not to the country, nor to the Libyan people.
"How come he (Belhadj) goes on the media, I haven't seen it but I was told, and claimed that we mistreated and tortured him? I swear to God that the day the Americans handed him over to us how the Americans brought him here hanging from an iron bar after torturing him.
"We have been nothing but good to him, just put him in a villa, and brought his wife and kids..."[4] 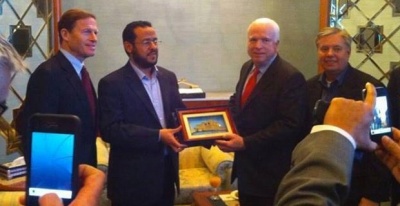 Recent reports suggest Abdelhakim Belhadj was put in power in Libya by the Obama State Department during Hillary Clinton’s tenure as Secretary of State and that Belhadj was in fact a major player in the events that led to the death on 12 September 2012 of American Ambassador, Chris Stevens, and three other Americans during the tragedy known as the "Benghazi Massacre".[5]

Since the 2012 Benghazi attack, chaos has continued to cover much of Libya, a place now ruled in part by ISIS forces led by Abdelhakim Belhadj. In 2004 Belhadj was held by CIA authorities after being picked up in Malaysia and then sent back to Libya where he was imprisoned and remained until his sudden release in 2011. Shortly after that release, Belhadj was made commander of the Tripoli Military Council during the revolution that eventually toppled Gaddafi. Why the US government appeared so willing to place so much trust with a man with strong ties to the Taliban and various other Islamic terrorist groups remains a mystery. What is less of a mystery is that Belhadj found supporters not only among the Obama administration, including the Hillary Clinton State Department, but a very select group of powerful Republicans as well. Current ISIS leader of Libya, Abdelhakim Belhadj is pictured receiving an award from Senator Richard Blumenthal, Senator John McCain, and Senator Lindsey Graham. It should be noted that this photo was taken in 2014 at a time when all three senators knew Belhadj had direct ties with the very militant groups that helped create and then carry out the September 11th 2001 attacks. Within months of this photo being taken, Belhadj oversaw the murders by ISIS of 21 Coptic Christians in Libya in February 2015. Belhadj has since implemented Sharia Law throughout much of Libya and is utterly devoted to promoting ISIS throughout not only the Middle East, but the world.[6]

Subsequent investigations following the 2012 Benghazi attack placed blame primarily upon a militant group known as Ansar al-Sharia. What the commercially-controlled media and politicians from both parties neglected to share is that Ansar al-Shariah was a sub-group of Libyan Dawn, a much larger and more powerful Libyan militant organisation headed by...Abdelhakim Belhadj.

Born on 1 May 1966 in the Souq al Jum'aa area of Tripoli, Abdelhakim Belhadj studied at Al Fateh University, where he earned a civil engineering degree. Following his graduation, he is said to have travelled extensively, spending time in Sudan, Turkey, Pakistan, Syria, as well as London and Denmark.[7] He is believed to have two wives; one Moroccan wife and a second Sudanese wife.

Belhadj went to Afghanistan in 1988 to participate in the Afghan jihad against occupying Soviet forces. Belhadj was arrested in Afghanistan and Malaysia in 2004, and was interrogated by the CIA in Thailand before being extradited to Libya in the same year. He was released in Libya in 2008, and announced his renunciation of violence the following year.[8] Belhadj is known within Islamist circles as “Abu Abdullah Assadaq".[9]

Abdelhakim Belhadj is described as Emir of the Libyan Islamic Fighting Group (LIFG), which was banned internationally as a "terrorist" organisation following the 9-11 attacks. The LIFG was founded in the 1980s by Libyan mujahideen returning from Afghanistan and was reportedly previously led by Abu Laith al-Libi, a top al-Qaeda leader who is believed to have been a training camp leader and key link between al-Qaeda and the Taliban. Considered a key component in the revolution that brought down the Gaddafi government, approximately 800 members of the LIFG are believed to have participated in fighting alongside rebel forces, under the leadership of Abdelhakim Belhadj. Libyan Islamists had been subject to government oppression since the 1980s. An LIFG rebellion was crushed in Benghazi in 1995 and 1,800 LIFG members were imprisoned. They were only released after the group’s ideology was revised in 2008. In September 2009, the LIFG published a new jihadist “code”, a 417-page document entitled “Corrective Studies” which was published after more than two years of intense talks between incarcerated LIFG leaders and Libyan officials, including Saif al-Islam Gaddafi.

The Gaddafi government released ten leaders of the LIFG (alongside 214 affiliates of other Islamist groups) on 23 March 2010. Belhadj was amongst those released, and he has been described as the Emir of the LIFG. In addition, other senior LIFG members were released, including LIFG theorist Sami al-Saadi, and LIFG military commander Khalid al-Sharif.[10]

In March 2011, members of the LIFG reportedly announced that they had placed themselves under the leadership of the Libyan rebel National Transitional Council, and that the group had changed its name from the LIFG to the Libyan Islamic Movement.[11]

Abdelhakim Belhadj was one of five Libyans to bring claims against the British government whose case was dismissed in the High Court on 15 April 2016. Mr Justice Irwin said that the Libyans had been fully justified in bringing their claims against MI5, MI6, the Home Office and the Foreign and Commonwealth Office, but the case had already been heard by the highly secretive Special Immigration Appeals Commission (SIAC) which had ordered the deportation of a number of the claimants from the UK to Libya. Because the matters had already been considered by SIAC, albeit in secret, the Judge said the civil claims had to be struck out.[12]

The claims arose out of events during the period of rapprochement between Tony Blair's government and the Gaddafi regime that began in late 2003. Among the papers discovered in Tripoli after Gaddafi's death in 2011 was a letter from Blair in which he thanks the dictator for excellent co-operation between the two countries' counter-terrorism agencies. One fax found showed that senior MI6 officer Mark Allen had insisted that his agency be given full credit for the tipoff that led to the abduction of Abdelhakim Belhadj, who had been kidnapped in Thailand and – together with his pregnant wife – transported to Libya as "air cargo".

Other papers showed how MI5 and MI6 submitted more than 1,600 questions to be put to Belhadj and Sami al-Saadi, despite widespread knowledge of the use of torture in Gaddafi's prisons. The documents show that Gaddafi's intelligence officers were permitted to operate alongside MI5 on British soil, where they allegedly intimidated a number of Libyan refugees who had been granted asylum.[13]

"Following a thorough investigation, the CPS has decided that there is insufficient evidence to charge the suspect with any criminal offence. We made our decision based upon all the available admissible evidence and after weighing up all of the information we have been provided with."

Scotland Yard said a small team of detectives had spent more than two years conducting a "thorough and penetrating investigation without fear or favour", and it was for the CPS to decide whether to prosecute. Both al-Saadi and Belhaj pursued civil claims against the British government and named individuals, al-Saadi having settled out of court but Belhaj's case is continuing.[14]

On 17 January 2017, the UK Supreme Court ruled that former Foreign Secretary Jack Straw, MI6 and Theresa May's government will have to defend claims that they participated in the 2004 kidnapping of Belhadj and his wife.[15] Quoting from Magna Carta, Supreme Court Judge Lord Mance said:

“No free man shall be taken, or imprisoned, or dispossessed, of his liberties or be outlawed, or exiled, or in any way destroyed excepting by the legal judgment of his peers, or by the laws of the land.”

Lord Mance added that the letter which Sir Mark Allen, then head of counter-terrorism at MI6, sent to Muammar Gaddafi’s intelligence chief, Moussa Koussa, provided a “hint of the underlying reasons” why the UK may have provided the tip-off that led to the couple being captured.[16]

In June 2017, it was reported that the FCO wants the Abdelhakim Belhadj rendition case against Jack Straw to be held in private.[17]