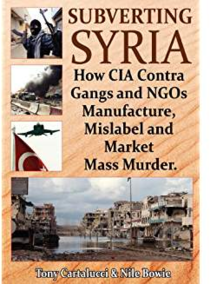 Brian Joseph Thomas Berletic, who wrote under the pen name of 'Tony Cartalucci', is a geopolitical researcher and writer based in Bangkok, Thailand.[1] His work covers world events from a Southeast Asian perspective. Berletic's former blog Land Destroyer Report moved to NewAtlas.report in October 2021.[2]

In March 2022, Brian Berletic was again suspended by Twitter for diverging from the western narrative.[3]

Brian Berletic is reportedly a former US marine.[4][5] He has been regular contributor to Land Destroyer Report[6], Activist Post[7], New Eastern Outlook[8], Russia Insider[9], The Daily Sheeple,[10] 21st Century Wire[11] and Global Research[12] and has had work published at Off Guardian.[13]

In a report about Fake news censorship in July 2019, New Eastern Outlook reported that both Berletic's Twitter and Facebook accounts had been deleted. [14] The report cites a Reuters article [15] in which a Facebook spokesman is quoted as saying that this and other account deletions were for "coordinated inauthentic behavior". It is a detailed account of the methods being employed by the Fake news campaign to censor platforms that effectively challenge western official narratives.

Brian Berletic argues that policy papers indicate that the United States plans to go with China, before China's economic and military might will irreversibly surpass that of the US in the early 2030s.[16][17] For that the US marines have done away with all their main battle tanks and other weapons systems to focus on Navy-centric warfighting.[18][19] The war would focus on challenging the Chinese Navy in the South China sea, to cause enough disturbance and through that bring about economic hardship.

There was a war going on for 8 years in Ukraine, 14,000 dead, spearheaded by units composed of literal Nazis - you didn't hear about it because it didn't suit the same liars who said Iraq had WMDs to tell the public... Russia didn't just start a war. They're trying to end an 8-year war.[20]

Brian Berletic is paying close attention to Russia's military moves in Ukraine and the western media's systematic misinformation practices in trying to present the "Ukraine is winning" narrative that has no factual basis. He dismantles this myth-making narrative using the West's own sources, including Pentagon briefings.[21]