From Wikispooks
< BBC
Jump to navigation Jump to search

The BBC Editorial Guidelines on Terrorism state that:

“We must report acts of terror quickly, accurately, fully and responsibly. Our credibility is undermined by the careless use of words which carry emotional or value judgements. The word "terrorist" itself can be a barrier rather than an aid to understanding. We should try to avoid the term, without attribution. We should let other people characterise while we report the facts as we know them.

We should not adopt other people's language as our own. It is also usually inappropriate to use words like "liberate", "court martial" or "execute" in the absence of a clear judicial process. We should convey to our audience the full consequences of the act by describing what happened. We should use words which specifically describe the perpetrator such as "bomber", "attacker", "gunman", "kidnapper", "insurgent, and "militant". Our responsibility is to remain objective and report in ways that enable our audiences to make their own assessments about who is doing what to whom.” [1] 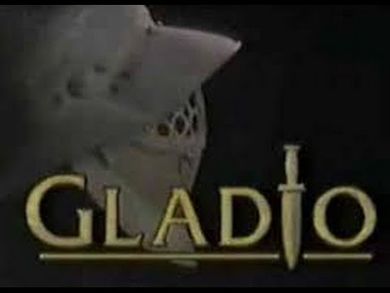 Alan Francovich's film, Operation Gladio, broadcast on BBC2 in 1992, was a highwater mark in the BBC's honesty as regards "terrorism"

Since the excellent film by Alan Francovich about Operation Gladio, the BBC has said almost nothing about false flag attacks. Since there is plentiful evidence that these make up an ever larger proportion of the incidents of "terrorism", this is in stark contrast to their above stated policy. [2]

In 2004, the BBC aired Adam Curtis' The Power of Nightmares. This stopped short of questioning the official narrative about who committed 9/11, but did question the enemy image of the "Muslim terrorist". Curtis noted how particularly post 9/11, politicians have appealed to people's fear; rather than offering voters a better world if they gave their support, politicians threatened them with a worse one if they did not. Curtis also examined the role of Western intelligence agencies in creating Wahabism, a topic which is appears to be off limits to modern BBC producers. Recent BBC output is dominated by hit pieces designed to bolster the sagging official narrative on "terrorism", for example the Conspiracy Files series. 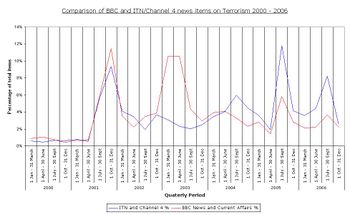 The graph on the right shows the percentage of items on "terrorism" returned during quarterly periods between 2000 and 2006 on the BBC compared with ITN and Channel 4. The graph apparently shows an increase following attacks in New York, Madrid and London, and the Israeli-Lebanon war. It also shows a marked increase in BBC items on "terrorism" at the end of 2002 and beginning of 2003 which is not apparent in ITN and Channel 4 coverage.

"Terrorism" is usually dealt with by a small number of BBC security correspondents, primarily Frank Gardner and Gordon Corera. Brian Rowan has been described as the BBC's Northern Irelend Security Correspondent, and has performed a similar role in relation to the Northern Ireland conflict.[citation needed]

Use of external experts

The table below shows the 20 "terrorism experts" who made the most appearance on BBC television between January 2000 and December 2007. 435 names from a list of terrorism experts were searched at the archives of the BBC Motion Gallery for appearances on BBC News and BBC Current Affairs programmes. Only appearances relating to terrorism were recorded. [3] The table is arranged according to the total number of items returned, and then alphabetically according to surname.

The table also shows the known affiliations of each expert as indicated by a mark in the columns labelled A-F. It shows that of the 20 top experts consulted by BBC television, 13 have worked in government or law enforcement, and six of the seven who have not, are affiliated to private think-tanks or private security companies. Only the Observer journalist Jason Burke has no such affiliation.

Asked about the BBC’s relationship with experts and commentators on "terrorism", security, and intelligence matters, BBC News Head of Editorial Compliance sent the following reply:

BBC News does not retain any experts and commentators on terrorism, security and intelligence matters on contract. We do sometimes pay a disturbance fee to contributors who make their living from selling their expertise (such as journalists, academics and members of think tanks) but many commentators do not ask for or expect any fee. Where payments are made, radio programmes, like “Today”, have a flat rate of £50. There is occasionally scope to exercise discretion, but it would be on a case by case basis. In daily Television News we have a basic disturbance fee of £50. This can be negotiable in certain circumstances, usually to an upper limit of £75. However, if we ask an interviewee to stay on set for longer periods (e.g. as a "presenter's friend") we will pay more, up to £350 for a five hour period, for example.[4]