The Bofors affair is a collective name for two deals in which the Swedish arms manufacturer Bofors was involved and which was discovered in the 1980s. This refers partly to smuggling of weapons and partly to allegations that Bofors had used bribes to sell howitzers to India.

The affair implicated the Indian prime minister, Rajiv Gandhi, and several other members of the Indian and Swedish governments who were accused of receiving kickbacks from Bofors AB, an arms manufacturer principally financed by the Wallenberg family's Skandinaviska Enskilda Banken,[1] for winning a bid to supply to India their 155 mm field howitzer.

The lead investigator in the case, Carl-Fredrik Algernon, died under suspicious circumstances when he was hit by a train at the Stockholm metro station T-Centralen on 15 January 1987.

The exposure gave a brief peek into the large worldwide black arms market that also was partially revealed in the Iran-Contra affair. 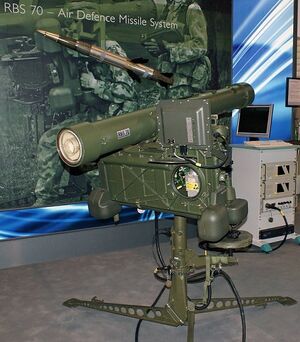 In May 1984, the Swedish Peace and Arbitration Society reported Bofors to the police for arms smuggling[2]. In 1979 and 1980, Bofors had smuggled 300 copies of the anti-aircraft system Robot 70 via Singapore to the United Arab Emirates (more specifically the Emirate of Dubai) and Bahrain in the Middle East. According to the Swedish Arms Export Act, one can not export munitions to countries that are at war, have a risk of going to war or to a country that violates human rights. To circumvent this, Robot 70 was sold to a company in Singapore called Unicorn International, which then resold Robot 70 to Dubai and Bahrain. On May 28, 1985, the whistleblower Ingvar Bratt revealed the deal.

On December 22, 1989, Bofors directors Martin Ardbo, Lennart Pålsson and Hans Ekblom were sentenced to probation by the Stockholm District Court for smuggling goods. The three had to pay the costs for their defense lawyers, Ardbo SEK 920,000, the others just over half a million each. Nobel Industrier was sentenced to pay a fine of SEK 11 million for exporting weapons illegally.

In the 1980s, India wanted to buy heavy artillery. Prime Minister Olof Palme had personally raised the issue in talks with then-Prime Minister Rajiv Gandhi. The Swedish state had also provided credit support and guarantee support, ie. that the order would be fulfilled even if India were to end up in an armed conflict. The Indian government had made it clear at an early stage, as early as 1980, that it did not want to use any intermediaries in arms deals. In both 1983 and 1985, India returned and expressed its dissatisfaction with Bofors' use of intermediaries. In the last round of negotiations, there were two suppliers, Bofors and a French manufacturer. The order was worth SEK 8.4 billion. On March 14, 1986, the Indian government decided to order 410 pieces of Haubit's 77B from Bofors. On the occasion of Olof Palme's funeral, the Indian Prime Minister Rajiv Gandhi went to Stockholm on March 15 and handed over the official announcement.

On April 16, 1987, Swedish Radio revealed that Bofors had bribed itself to the order. Through bank accounts in Switzerland, Bofors had been able to bribe suitable decision-makers in India. Bofors denied that the payments to a company in Switzerland had anything to do with the India deal. On April 29, Minister of Foreign Trade Anita Gradin commissioned the National Audit Office (RRV) to investigate what payments Bofors had made abroad. The National Audit Office's report showed that Bofors paid out at least SEK 260 million to a company in Switzerland. The main stakeholder in this company was an Indian, WN Chadha, who has been an agent for Bofors for many years. Bofors told RRV that it had ended its work with intermediaries in India in 1985.

On August 19, 1987, Chief Prosecutor Lars Ringberg decided to initiate a preliminary investigation into bribery. This inquiry was closed in January 1988. In India, the bribery scandal received a great deal of attention and is believed to have contributed to Rajiv Gandhi and the Congress party losing the parliamentary elections in November 1989. Bofors director Martin Ardbo was summoned to court in India in 1999 but refused to appear.

On April 24, 2012, Sten Lindström, former crime commissioner and investigator at the Swedish Environmental Crime Agency, confirmed that in connection with the disclosure, he had handed over 350 documents to an Indian journalist. The documents contained, among other things, payment instructions to banks, secret agreements, meeting minutes and notes from diaries. Lindström states that the then Bofors boss Ardbo even hid the bribes from his own marketing director. According to Lindström, Ardbo stated that he would take the truth with him to the grave, and nothing more came to light when Lindström met Ardbo a short while before he passed away.[3]

This page imported content from Wikipedia on 22.09.2021.
Wikipedia is not affiliated with Wikispooks.   Original page source here
Retrieved from "https://wikispooks.com/w/index.php?title=Bofors_Affair&oldid=229372"
Categories: