The Bullingdon Club is an elite drinking/dining club at Oxford University, which appears to fulfil a somewhat similar function to the Skull and Bones fraternity (in Yale University) with many members keeping the relationships they form in their university days, and reaching senior position in the UK establishment, especially as politicians or journalists.

The Bullingdon Club elite drinking/dining club at Oxford university, with an acknowledged history of property destruction when inebriated.[1] Restaurant/pub owners are paid in full. Nothing sinister should be inferred from the remarkable track record of members in infiltrating establishment positions.

The Bullingdon Club's members have become notorious over the years for vandalising restaurants and trashing students' rooms.[2] The club members involvement in criminal violence, and their code of omertà - protecting each other - seems like a poor basis for which to select people for public office. 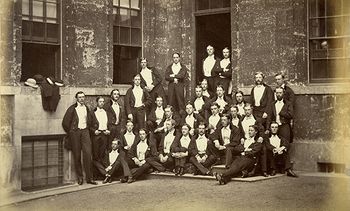 The Bullingdon Club in the late 19th century

Once accepted members must then purchase the uniform at a cost of £3,500.[3] Eating out and them destroying glassware seems to be the main ritual associated with the Bullingdon Club, which is increasingly being frowned upon - leading some would-be members to seek alternative options, such as the Stoics club.[3]

The BBC reported in 2007 that "News media have been prevented from showing a photo of David Cameron with fellow Oxford dining club members", allegedly for business reasons.[2]

A film called The Riot Club was produced in 2014, ostensibly about the behaviour of the Bullingdon Club. In the Daily Mail a report concluded that it was a "woefully weak make-believe vision of a university club".[4]

In 2007, the Telegraph published a photo of the Bullingdon Club taken in 1987 was published which featured Boris Johnson and David Cameron.[5]