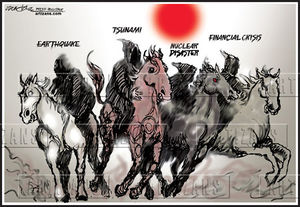 The media onslaught has moved past the attack in Salisbury by a “weapon of mass destruction” (quoting Theresa May) which could only be Russian, except that was untrue, and was extremely deadly, except that was untrue too. It now focuses on an attack by chemical weapons in Douma which “could only be” by the Russian-backed Assad regime, except there is no evidence of that either, and indeed neutral verified evidence from Douma is non-existent. The combination of the two events is supposed to have the British population revved up by jingoism, and indeed does have Tony Blair and assorted Tories revved up, to attack Syria and potentially to enter conflict with Russia in Syria.

The “Russian” attack in Salisbury is supposed to negate the “not our war” argument, particularly as a British policeman was unwell for a while. Precisely what is meant to negate the “why on earth are we entering armed confrontation with a nuclear power” argument, I do not know.

Saudi Arabia has naturally offered facilities to support the UK, US and France in their attempt to turn the military tide in Syria in favour of the Saudi sponsored jihadists whom Assad had come close to defeating. That the Skripal and Douma incidents were preceded by extremely intense diplomatic activity between Saudi Arabia, Washington, Paris and London this year, with multiple top level visits between capitals, is presumably supposed to be coincidence.

I am not a fan of Assad any more than I was a fan of Saddam Hussein. But the public now understand that wars for regime change in Muslim lands have disastrous effects in dead and maimed adults and children and in destroyed infrastructure; our attacks unleash huge refugee waves and directly cause terrorist attacks here at home. There is no purpose in a military attack on Syria other than to attempt to help the jihadists overthrow Assad. There is a reckless disregard for evidence base on the pretexts for all this. Indeed, the more the evidence is scrutinised, the dodgier it seems. Finally there is a massive difference between mainstream media narrative around these events and a deeply sceptical public, as shown in social media and in comments sections of corporate media websites.

The notion that Britain will take part in military action against Syria with neither investigation of the evidence nor a parliamentary vote is worrying indeed. Without Security Council authorisation, any such action is illegal in any event. It is worth noting that the many commentators who attempt to portray Russia’s veto of a Syria resolution as invalid, fail to note that last week, in two separate 14 against 1 votes, the USA vetoed security council resolutions condemning Israeli killings of unarmed demonstrators in Gaza.[1]

The lesson the neo-cons learnt from the Iraq war is not that it was disastrous. It was only disastrous for the dead and maimed Iraqis, our own dead and maimed servicemen, and those whose country was returned to medievalism. It was a great success for the neo-cons, they made loads of money on armaments and oil. The lesson the neo-cons learned was not to give the public in the West any time to mount and organise opposition. Hence the destruction of Libya was predicated on an entirely false “we have 48 hours to prevent the massacre of the population of Benghazi” narrative. Similarly this latest orchestrated “crisis” is being followed through into military action at a blistering pace, as the four horsemen sweep by, scything down reason and justice on the way.