Document:Why is the CBC Lying About Venezuela 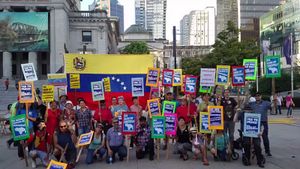 ★ Start a Discussion about this document
Why is the Canadian Broadcasting Corporation (CBC) lying about Venezuela?

While in New York City for the United Nations General Assembly during the last week of September the Prime Minister of Canada spoke about Venezuela. As he defended the government of Canada’s outrageous decision to lead the right-wing attempt to bring the President of Venezuela, Nicolás Maduro to the International Criminal Court. Trudeau said:

"The message is that the situation in Venezuela is catastrophic. There is a humanitarian crisis going on in a country that used to be one of the most successful and prosperous countries in South America."

Interestingly, with this one rhetorical and inflated lie, meant to justify Canada’s intervention in the internal affairs of the sovereign and independent country of Venezuela, Trudeau has nicely summed up a recent report on Venezuela on the CBC Radio’s The Current.

Host Anna Maria Tremonti, began the Venezuela segment during the September 11, 2018 episode of The Current in so many words, stating:

“An estimated 2.3 million Venezuelans and counting have packed up and left their country over the last four years. That’s about 7% of the population, an exodus that could soon rival the Syrian migration crisis regarding its size and the impact that it is having on neighbouring countries, according to the UN. But Venezuelans are not fleeing civil war; they are fleeing food shortages and runaway inflation in an oil-rich nation.”

Disaster. Crisis. Once oil-rich nation. This is the go-to rhetoric of the government of Canada, and now also, of the CBC and Tremonti, which is nothing but a mouthpiece of the government when it comes to their so-called reporting about the country of Venezuela.

The problem with this is that the CBC and veteran journalist Anna Maria Tremonti isn’t the government of Canada. They are, in fact, publicly-funded journalism that is supposed to operate based on its Mission and Principles; empty statements such as, “We are independent of all lobbies and all political and economic influence” or “Balance - On issues of controversy, we ensure that divergent views are reflected respectfully, taking into account their relevance to the debate and how widely held these views are” and “Impartiality - We provide professional judgment based on facts and expertise. We do not promote any particular point of view on matters of public debate”. Independence, balance, impartiality, when it comes to Venezuela, the CBC is anything but.

For Tremonti and The Current, these basic principles of bourgeois journalism have most certainly been thrown out the window, in favour of the far more sensationalist, bombastic, pro-intervention journalism – yellow journalism by definition (“the type of journalism that relies on sensationalism and lurid exaggeration to attract readers”). Yellow journalism supported the US/Canada/NATO invasion and occupation of Afghanistan, the US/UK invasion and occupation of Iraq, the countless other devasting wars, occupations and invasions carried out by the United States and their allies, including Canada. Today, yellow journalism is fuelling and fomenting ever-increasing sanctions and threats against Venezuela.

The CBC is lying about Venezuela

In merely a 20-minute report, Tremonti, together with the on-the-ground observations of another CBC senior correspondent Adrienne Arsenault, manages to spew-forth nearly every pro-intervention exaggerated claim about Venezuela there is to be found.

Rather than share the perspectives of a leader of Venezuela’s government or one of the mass majority of people in Venezuela that support the democratically elected government of President Maduro, The Current instead chose to play a quote from the war-mongering United States Ambassador to the United Nations, Nikki Haley.

Without a shred of critical thinking, Tremonti let Haley take over the airwaves with the threatening statement:

“The world in general needs to realise that we have a dictator in Venezuela that is doing everything to protect himself and sacrificing all of the Venezuelan people to do it. At some point, Maduro is going to have to be dealt with.”

This certainly sounds like Tremonti and the CBC are drumming for war and invasion against Venezuela. When Haley says “dealt with” there is no question that she means the US President Donald Trump’s “all options are on the table when it comes to Venezuela” kind of dealt with; the kind of “dealt with” that means bloodshed in Venezuela.

Anna Maria Tremonti continues her unprincipled and uncritical acceptance of every hawkish, pro-intervention statement about Venezuela as she interviews Adrienne Arsenault, who is reporting from the town of Cúcuta, Colombia. Arsenault paints a dramatic picture of the border town, carefully crafted to scream “humanitarian crisis” – an often repeated lie about Venezuela today.

However, after listening to the entire report, there is a large elephant in the room. The most glaring omission from the September 11 broadcast was a single word – sanctions. Not once did Tremonti, nor anyone else on the program even mentions that Venezuela is under a brutal sanctions regime from the United States, Canada, the European Union, Switzerland and Panama. These sanctions have been designed to have a crippling effect on the ability of the government of Venezuela to import food, medicines and basic goods. As explained by Mike Weisbrot, co-director of the Center for Economic and Policy Research in Washington, D.C.:

“The sanctions do their damage primarily by prohibiting Venezuela from borrowing or selling assets in the US financial system. They also prohibit CITGO, the US-based fuel industry company that is owned by the Venezuelan government, from sending dividends or profits back to Venezuela.”

If the government of Venezuela doesn’t have access to cash, or the world banking and financial system, exactly how can they import the necessities that the people of Venezuela need?

If brevity was your concern, then a short quote from the former Prime Minister of Spain, José Luis Rodríguez Zapatero would have sufficed:

"I must say that the intensification of the growth in emigration these past months has much to do with the economic sanctions imposed by the US and that has been supported by some governments.”

Or, as Alfred de Zayas, Independent Expert on the promotion of a democratic and equitable international order from the United Nations reported:

“The effects of sanctions imposed by Presidents Obama and Trump and unilateral measures by Canada and the European Union have directly and indirectly aggravated the shortages in medicines such as insulin and anti-retroviral drugs. To the extent that economic sanctions have caused delays in distribution and thus contributed to many deaths, sanctions contravene the human rights obligations of the countries imposing them.”

Also missing from the CBC’s report is any reference to the economic sabotage being carried out by Venezuela’s counter-revolutionary opposition. The majority of the production and distribution of food and basic goods in Venezuela is still in the hands of the ultra-rich. Among other acts of violence and terrorism, the reactionary capitalist class has carried out hoarding, price-gouging and even gone so far as to light food on fire to impose chaos and hunger on the people of Venezuela.

By leaving sanctions, smuggling and economic sabotage out of the equation, The Current and Anna Maria Tremonti’s yellow journalism have left the listeners with only one conclusion, the government of Venezuela is to blame – and government of President Nicolas Maduro and the Bolivarian revolutionary process must be overthrown if the people of Venezuela are to get any relief.

Venezuela is not Syria

Near the end of Arsenault’s reporting from Colombia, Tremonti gets to her very manipulative question - “Of course, officials [?] say this could rival the Syrian migration crisis regarding scale, how useful is this comparison?” Arsenault’s response, "You know, I think that it is useful regarding people's consciousness and understanding. There are embedded images of people leaving Syria, and I think that that comparison is what's useful. Number wise? The UN estimates there were 5 million refugees from Syria, so if the 2.3 is accurate, and again I think it's conservative, then we are about half-way there, and really this crisis seems nowhere close to ending."

First of all, Venezuela is not Syria. Following seven years of US attacks on Syria - bombing, intervention, and support for terrorist organisations, - 6.5 million people in Syria are food insecure, and 4 million are at risk of food insecurity (UN-FAO). More than half of the population of Syria, 12 million people, have been displaced, with more than 5.6 million people externally displaced.

The highest estimate for the number of people that have left Venezuela between 2013-2017 – between 1.5 and 2.3 million people - isn’t even close to these devastating numbers. However, this statistic, from the UN Refugee Agency (UNHCR) cannot and should not be taken at face value because it doesn’t consider the nationality of the people that have left Venezuela. In a report published by the Colombian Office of the International Organisation for Migration (IOM) in July 2017, it was found that at the end of 2016, 67% of the people crossing into the three most effected Colombian border cities: Cúcuta, Villa del Rosario and Arauca, were either Colombian or Colombian-Venezuelans.

Also, unlike Syrian refugees, who have no idea of when they will be able to return to Syria, according to the IOM report, more than 92% of people crossing intended to return to Venezuela within two months.

In this segment, Tremonti doesn’t come close to recognising that 5.6 million Colombians fled to Venezuela over the last decades (where was the “international outcry” about this?), or that today over 3,000 Venezuelans have returned to Venezuela through Plan Patria after discovering that life in Colombia, Peru or Brazil wasn’t what they were promised.

For her final segment, Tremonti interviews Rebecca Sarfatti, who sits on the board of the Canada Venezuela Democracy Forum, a non-profit organisation in Canada. Not once has she interviewed a Venezuelan living in Venezuela, but somehow Sarfatti gets centre-stage. As the saying goes, you are the company you keep, and Sarfatti is a leader in the right-wing Venezuelan community in Canada, a community that publicly attempts to silence the voices through threats and intimidation. Most recently, the President of the Canada Venezuela Democracy Forum, Soraya Benitez, called on her right-wing mobs to give a “warm welcome” to the Vice-minister for North America of the Ministry of Foreign Relations of Venezuela when he visits Canada.

What kind of respected journalist would show such a disregard for even the appearance of impartiality?

How about playing the words of Alfred de Zayas?: “A disquieting media campaign seeks to force observers into a preconceived view that there is a ‘humanitarian crisis’ in the Bolivarian Republic of Venezuela. An independent expert must be wary of hyperbole, bearing in mind that ‘humanitarian crisis’ is a terminus technicus that can be misused as a pretext for military intervention…”

Or would that hit too close to home? You’re much more comfortable with the words of US President Trump at the United Nations General Assembly, right?: “More than two million people have fled the anguish inflicted by the socialist Maduro regime and its Cuban sponsors," might just be right up your alley.

As poor, working and oppressed people in Canada, we cannot rely on the CBC, or any mainstream, capitalist news outlet to tell the truth about Venezuela today. It is not only Ana Maria Tremonti and The Current, but many programs on CBC that continued to propagate the same lies about Venezuela. As the mouthpiece of the government of Canada, they will never put forward the voices of poor, working and oppressed people in Venezuela who support the revolutionary government of President Nicolás Maduro and are carrying forward the Bolivarian revolutionary process. It is our responsibility as people living in the United States and Canada to elevate their voices, and join with them in organising to bring an end to the US-led intervention, sanctions and threats against the sovereign country of Venezuela.