Edelman is an American public relations and marketing consultancy firm, founded in 1952 by, and named after, Daniel Edelman. As part of its work for large corporations, the company has significant deep state connections, for example the Atlantic Council and the World Economic Forum, and has ties to several deep state activities, like the Integrity Initiative and participation in the Event 201 Covid-19 dry run.

It is an expert on astroturfing, creating front groups, coopting NGOs and dominating social media to get a message across.

From the very beginning the company has ties to the intelligence world. The company was founded by Daniel Edelman, who after serving in a United States Army psychological warfare unit during World War II, right after the war became a night news reporter at CBS.

In 1947 Daniel Edelman moved to Chicago as public relations director for hair care product line Toni Home Permanent Co. (now a division of Gillette). In 1952 he founded Edelman there.

His son Richard Edelman became President & chief executive officer in 1985. Richard is a regular attendee at the World Economic Forum's annual meeting in Davos. He sits at the board of the deep state militarist think tank the Atlantic Council.[1] He is also a member of the Arthur Page Society, the PR Seminar and a director of the Jerusalem Foundation.[2]

According to a marketing executive, an Edelman executive providing media training to his firm said:[3]

"Sometimes, you just have to stand up there and lie. Make the audience or the reporter believe that everything is ok. How many times have you heard a CEO stand up and say, 'No, I'm not leaving the company,' and then — days later — he's gone. Reporters understand that you 'had' to do it and they won't hold it against you in your next job when you deal with them again."

Edelman has been one of the leaders in the PR industry in advocating the benefits of corporations "engaging" with non-government organisations. "We recognized before anyone that NGOs, such as Greenpeace and Amnesty International, were influencing corporate social responsibility by highlighting environmental and labor practices," Edelman used to claim on its website. [4]

Edelman PR tells clients that activists are winning because "they play offense all the time; they take their message to the consumer; they are ingenious at building coalitions; they always have a clear agenda; they move at Internet speed; they speak in the media's tone."

Matthew J. Harrington, CEO of Edelman, participated in Event 201, the pandemic planning exercise held in late 2019. His work "has encompassed work for hundreds of clients across nearly every industry sector," and also "led the initiative to create Edelman’s code of conduct".[21] 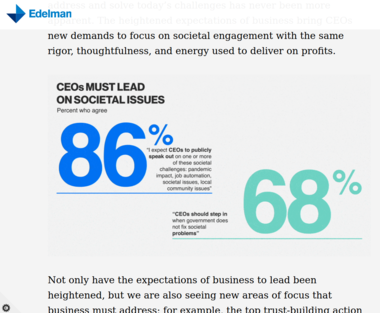 Edelman Intelligence is the research company behind the Edelman Trust Barometer, an international study conducted in 25 countries among opinion elites that focuses on the principles of trust in business, government, media and NGOs.[22]