Event 201 was a pandemic preparation exercise was held in New York in front of an audience on 18 October 2019. The "exercise players" simulated a global coronavirus pandemic.[1] At least one participant went on to feature in a COVID task force the following year.[2]

An cuddly virus toy given away to attendees

“The policy crisis for the board to consider in this meeting is this. How should national leaders, businesses and international organizations balance the risk of worsening disease that would be caused by the continued movement of people around the world against the risks of profound economic consequence of travel and trade bans?”
(18 October 2019)  [3]

On 24 January 2020 the Johns Hopkins Center for Health Security issued a "Statement about nCoV and our pandemic exercise":

“To be clear, the Center for Health Security and partners did not make a prediction (...) We are not now predicting that the nCoV-2019 outbreak will kill 65 million people. Although our tabletop exercise included a mock novel coronavirus, the inputs we used for modeling the potential impact of that fictional virus are not similar to nCoV-2019.”
(24 January 2020)  [4]

The event was introduced by

The official website listed 15 "players", although a couple more appear to be seated in the photo (left): 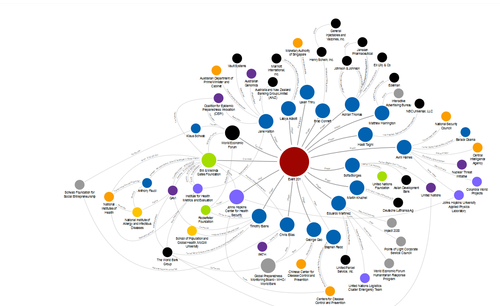 The event was introduced by a video featuring "Mike Ryan, the executive director at who and the head of who is emergency program".[7] The conjectured pandemic was "a SARS-like virus, germinating quietly among pig farms in Brazil before spreading to every country in the world." The site reported that "the immune-resistant virus (nicknamed CAPS) was crippling trade and travel, sending the global economy into freefall."

Topics discussed during the event included:

The following quotes are drawn from a machine-generated transcript of the event (archived).

“[M]y team has been monitoring the public response. And on various social media channels and cable networks, there's been some conspiracy theories that are around about the potential that pharmaceutical companies or the UN have released this for their own benefit... if conspiracy theories like this come up already, so we are on the edge of hysterical reactions.”
(18 October 2019)  [3]

“My team has been monitoring the public response. And on various social media channels and cable networks, there's been some conspiracy theories that are around about the potential that pharmaceutical companies or the UN have released this for their own benefit. So as we move forward, obviously, trust in pharmaceuticals and government is very important at this moment. And so as we move forward with developing the right scenarios, we have to make sure that the public communication is a major part of that because of these conspiracy theories.”
(18 October 2019)  [3]

“Some governments have taken control of national access to the internet. Others are censoring websites and social media content, and a small number have shut down internet access completely to prevent the spread of misinformation. Penalties have been put in place for spreading harmful falsehoods, including arrests. Other countries have taken a more moderate approach and have focused on promoting fact checking efforts and working with traditional media outlets. Yet these approaches are limited in scope. Social media companies report that they're doing all they can to limit the use of their platforms for nefarious or misleading purposes. But this is a technically difficult problem and false misleading or half true information is difficult to sort without limiting potentially true messages. The bottom line is that members of the public no longer know who to trust. Both the misinformation and the measures to control it have led to a crisis of confidence”
(18 October 2019)  [3]

“I also think we are at a moment where the social media platforms have to step forward and recognize the moment to assert that they're a technology platform and not a broadcaster is over. They in fact have to be a participant broadcasting accurate information and partnering with the scientific and health communities to counterweight, if not flood the zone, of accurate information. Because to try to put the genie back in the bottle of the misinformation and disinformation is not possible.”
Matthew Harrington (18 October 2019)  [10]

“It's important that the UN and WHO remain very clear, but when they challenge governments directly, they often get into this issue of sovereignty. And so I think it's really important not to have that as the only response. I think it's really critical to think about soft power influence, which is other influentials, who can call up the head of state, or powerful constituencies within those countries. We've seen this in the context of mobilizing religious leaders in the context of polio, or specific business leaders where you can soften perhaps a very hard line from government through less more stealthy entry points, rather than trying to punish them through the International Health Regulations or something like that.”
(18 October 2019)  [3]

“it shouldn't be controversial to suggest our response should prioritize both lives and livelihoods. Absolutely. We need to save lives. We all know someone who's been affected by cats. But we literally cannot afford a heavy handed response that suffocates our economy. pragmatism is a wise choice. I mean, what exactly are the risks and benefits of slowing air travel of staying home from work, closing schools, disrupting supply chains, interfering with our reliable channels of communication and news? Sure, some of these steps can help slow caps but often only most - 3:00 - Generally and with serious costs, when this is all over some families, some cities will have suffered more from our interventions, then from CAPS.”
(18 October 2019)  [3]

“The world saw large scale protests and in some places riots, people were angry about the lack of access to health care and medicine, as well as government's inability to protect them from the disease. This led to violent crackdowns in some countries and even martial law. political upheaval became the rule across the globe. Public lost trust and their respective administrations, several governments fell, while others were desperately striving to hold on to power. This spurred further crackdowns, attempt to control media messaging originally aimed only at health related misinformation became used increasingly to quash political dissent.”
(18 October 2019)  [3]

News.com.au termed it a "creepy coincidence"[11] that it simulated a global coronavirus outbreak which so closely foreshadowed the ensuing 2020 COVID-19 Pandemic.[8]

Jane Halton, who participated in the event was appointed in March 2020 to the Australian National COVID-19 Coordination Commission.[12] [

Bill Gates, whose Gates Foundation co-funded the event, was aggressive in his support of the COVID Lockdown strategy and his promotion of a COVID vaccine and accompanying digital ID as their only exit strategy. On April 12, 2020, he told the BBC, “Now here we are. We didn’t simulate this, we didn’t practice, so both the health policies and economic policies, we find ourselves in uncharted territory.”[13]

As of March 2020, Wikipedia reported that "The exercise illustrated areas where public/private partnerships will be necessary during the response to a severe pandemic in order to diminish large-scale economic and societal consequences."[14]