Ajami was born in Arnoun in Southern Lebanon and raised in Beirut. [1] He arrived in the United States in the autumn of 1963 just before he turned 18 and studied at the Eastern Oregon College (now Eastern Oregon University) in La Grande, Oregon and studied his PhD at the University of Washington. [2] His thesis, published in 1973 was titled: 'Multinational corporate giants in the international system; on the social and political costs of unregulated growth'. [3]

Ajami he was appointed a Politics Professor at Princeton University[When?]. In 1980 he was appointed the director of the Middle East Studies Program at the Paul H. Nitze School of Advanced International Studies (SAIS) at Johns Hopkins University. [4] A year after arriving at SAIS, Ajami published his first book, The Arab Predicament, which examined the intellectual and political crisis following the Arab countries' defeat by Israel in the 1967 war. According to Adam Shatz writing in The Nation, the book was 'probing and subtle' and an 'elegant, often moving portrait of Arab intellectuals' but 'paid little attention to imperialism, and even less to Israel's provocative role in the region.' This oversight meant that 'Pro-Israel intellectual circles groomed him as a rival to Edward Said, holding up his book as a corrective to Orientalism, Said's classic study of how the West imagined the East in the age of empire. ' [5] Shatz describes how Ajami subsequently came into direct conflict with Said:

In late May 1985, Ajami--now identifying himself as a Shiite from southern Lebanon--sparred with Said on the MacNeil Lehrer Report over the war between the PLO and Shiite Amal militia, then raging in Beirut's refugee camps. A few months later, they came to verbal blows again, when Ajami was invited to speak at a Harvard conference on Islam and Muslim politics organized by Israeli-American academic Nadav Safran. After the Harvard Crimson revealed that the conference had been partly funded by the CIA, Ajami, at the urging of Said and the late Pakistani writer Eqbal Ahmad, joined a wave of speakers who were withdrawing from the conference. But Ajami, who was a protégé and friend of Safran, immediately regretted his decision. He wrote a blistering letter to Said and Ahmad a few weeks later, accusing them of "bringing the conflicts of the Middle East to this country" while "I have tried to go beyond them.... Therefore, my friends, this is the parting of ways. I hope never to encounter you again, and we must cease communication. Yours sincerely, Fouad Ajami." [6]

During the 1980s Ajami moved closer to U.S. power and away from sympathy with the Palestinians. He paid visits to Israel and visited the Palestinian Occupied Territories under the guard of the Israeli Defence Forces. He also paid visits to Saudi Arabia. Iraq's invastion of Kuwait in 1990 'consummating [Ajami's] conversion to Pax Americana'. [7] At a meeting of the Council on Foreign Relations, he told a group that, as one participant recalls, "the Saudi system was a lot stronger than we thought, that it was a system worth defending, and that it had nothing to apologize for." He praised Benjamin Netanyah for his "filial devotion [to] the land he had agreed to relinquish" and called Ehud Barak, "an exemplary soldier." [8]

"Fouad Ajami predicts that after liberation in Basra and Baghdad, the streets are sure to erupt in joy." - U.S. Vice President Dick Cheney in August 2002 [9]

Ajami has been an outspoken supporter of the Iraq War, which he believes "issued out of a deep American frustration... with the culture of terrorism that had put down roots in Arab lands."

In an August 2002 speech before the Veterans of Foreign Wars, US Vice President Dick Cheney sought to assuage concerns about the anticipated US invasion of Iraq, stating: "As for the reaction of the Arab 'street,' the Middle East expert Professor Fouad Ajami predicts that after liberation, the streets in Basra and Baghdad are 'sure to erupt in joy in the same way the throngs in Kabul greeted the Americans.'" [10]

Ajami cautioned the United States about the likely negative consequences of the Iraq War. In a 2003 essay in Foreign Affairs, "Iraq and the Arabs' Future," Ajami wrote,

There should be no illusions about the sort of Arab landscape that America is destined to find if, or when, it embarks on a war against the Iraqi regime. There would be no "hearts and minds" to be won in the Arab world, no public diplomacy that would convince the overwhelming majority of Arabs that this war would be a just war. An American expedition in the wake of thwarted UN inspections would be seen by the vast majority of Arabs as an imperial reach into their world, a favor to Israel, or a way for the United States to secure control over Iraq's oil. No hearing would be given to the great foreign power.[11]

But he also goes on to say:

America ought to be able to live with this distrust and discount a good deal of this anti-Americanism as the "road rage" of a thwarted Arab world — the congenital condition of a culture yet to take full responsibility for its self-inflicted wounds. There is no need to pay excessive deference to the political pieties and givens of the region. Indeed, this is one of those settings where a reforming foreign power's simpler guidelines offer a better way than the region's age-old prohibitions and defects.

In a 2006 book on the invasion and its aftermath, he described the Iraq War as a noble effort, and argues that despite many unhappy consequences, it is too soon to write it off as a failure.[12]

Vice President Cheney cited Ajami again in an 21 October 2007 speech to the Washington Institute for Near East Policy, stating, "We have no illusions about the road ahead. As Fouad Ajami said recently, Iraq is not yet 'a country at peace, and all its furies have not burned out, but a measure of order has begun to stick on the ground.'" [13]

In 1985 Ajami was made a high-paid consultant to CBS News.[14] Ajami is a frequent contributor on Middle Eastern issues and contemporary international history to The New York Times Book Review, Foreign Affairs, The New Republic, The Wall Street Journal, and other journals and periodicals, as well.[15] Ajami frequently appears on PBS and CBS News.

In "The Fate of Nonalignment," an essay in the Winter 1980/81 issue of the journal Foreign Affairs, Ajami outlines how the Third world has fared in a context of nonalignment in post Cold war politics. In 1980, he accepted an offer from Johns Hopkins University to become director of Middle East Studies at their international relations graduate program in Washington, D.C.: the Paul H. Nitze School of Advanced International Studies (SAIS). He holds an endowed chair as the Majid Khadduri professor.

A year after arriving at SAIS, Ajami published his first book, The Arab Predicament, which analyzed what Ajami described as an intellectual and political crisis that swept the Arab world following its defeat by Israel in the 1967 Six Day War.

Subsequently, Ajami has written several other books: The Dream Palace of the Arabs: A Generation’s Odyssey (1998), Beirut: City of Regrets (1988), and The Vanished Imam: Musa Al-Sadr and the Shia of Lebanon (1986).

In The Dream Palace of the Arabs: A Generation’s Odyssey, Ajami surveyed the intellectual landscape in the Arab world and Iran, in what was in some ways an autobiography as well as a sequel to "The Arab Predicament." On Middle Eastern politics, he wrote of "a world where triumph rarely comes with mercy or moderation." On Pan-Arabism, he described the ideology as "Sunni dominion dressed in secular garb."

Ajami's most recent book: The Foreigner's Gift: The Americans, The Arabs and The Iraqis in Iraq (2006), offers a portrait of the struggle for Iraq. 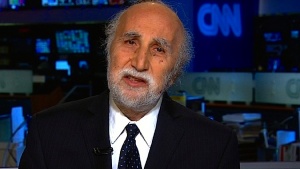 +
Display lifespan
18 September 1945 - 22 June 2014 +
Has almaMater
Eastern Oregon College +  and University of Washington +
Has bilderbergCount
3 +
Has birthPlace
Arnoun +  and Lebanon +
Has cercleCount
0 +
Has deathPlace
Maine +  and United States +
Has fullPageName
Fouad Ajami +
Has fullPageNamee
Fouad_Ajami +
Has historycommons
http://www.historycommons.org/entity.jsp?entity=fouad ajami 1 +
Has image