Giancarlo Elia Valori was chairman of numerous Italian companies including: Autostrade per l'Italia S.p.A., which manages the Italian motorway network, the electricity company Società Meridionale di Elettricità, the Unione Industriali di Roma. From 2006 to 2011 he was President of Sviluppo Lazio, the holding company of all the companies from the region, and building enterprise Torno Internazionale S.p.A. Since 2005 has been honorary president of Huawei Technologies Italy, then president of the holding company La Centrale Finanziaria S.p.A. and since 2009 he has been President of the Italian delegation of the Abertis Foundation. He is also economic adviser to the Chinese giant HNA Group and Khashoggi Holding’s advisor.[1]

He was born in Meolo, in the province of Venice, on January 27, 1940 from Tuscan parents. His father Marco was a classmate of the future senator, President of the Council and over Democrat minister Amyntor Fanfani. He studied economics and moved to Rome.

In 1965 he entered RAI as a consultant and then as an official in international relations. His brother, Eni was a representative in Argentina and introduced him into circles close to various South American governments.[Which?] Meanwhile he cultivated relations with the Roman Curia. Valori ​​will make the most of his later career, thanks to his diplomatic skills, his contacts with foreign countries, with the Catholic circles and the freemasons. In fact, despite the Vatican's excommunication of freemasons, he enrolled first, in 1965, the Romagnosi Lodge of the Grand Orient of Italy, then, the P2 lodge of Licio Gelli.[citation needed]

In 1976, Deputy Director General of Italstrade and in this period he reports with spook Nicola Falde, and officer of the military security service, Giuseppe Santovito, at the time commander of Comiliter of Rome and later head of SISMI] (both members of P2, like so many other friends and acquaintances at the time, including the journalist Mino Pecorelli). In questioning before the judge Rosario Priore, Valori ​​stated the following about his relationship with Santovito, "that the services could have a significant role regarding the economic and trade openness to foreign markets, especially towards Libya, Iran, Algeria, Saudi Arabia, Turkey... Knowing the relationships that the Service had at the time with the entire Arab world, I asked the general Santovito keep in mind, within the law and the interests of the state, the company of Italstrade, company Iri capital, for any work to be done in those countries."[2]

By 1972, Giancarlo Elia Valori was right-hand man to P2 Grand Master Licio Gelli, but relations between the two soured and Gelli expelled Valori from P2 in 1974. In 1981 the P2 scandal broke out and Valori's name ​​appeared on Gelli's lists of expelled members.[3]

Also, thanks to his network of international contacts, Valori ​​would contribute decisively to the release of three French hostages kidnapped in 1985 in Iran by Islamic extremists and released in 1988. During a business trip to the Far East on behalf of RAI, Valori met North Korean President Kim Il Sung and he turned to him because they see more work to convince the religious leaders in Tehran to exert their influence on the kidnappers, so as to obtain the release of hostages. When, years later his responsibilities in the affair came to light, French President François Mitterrand appointed him a Knight of the Legion of Honor.[citation needed]

The December 28, 2007, the judge Luigi De Magistris, heard by the Salerno Prosecutor as part of the "Why Not" affair, stated of the investigations: "They were building the influence of occult powers (...) in vital mechanisms of republican institutions: in particular I was reconstructing the contacts maintained by Giancarlo Elia Valori, Luigi Bisignani, Franco Bonferroni, and others, and their influence on the banking and business communities financial (...) Giancarlo Elia Valori seemed to be the current leader of the "contemporary Freemasonry" and values ​​hath often occupied public works."[4]

The importance of Valori's international ​​activities is demonstrated breadth of its political and cultural relations toward Israel and China. An essay wrote about him that "As a sign of gratitude for the strong commitment in building a just peace in the world, the Hebrew University of Jerusalem has entrusted the presidency of the "Chair of peace and regional cooperation" together with the the direction of a specific course in the faculty of Law, open to Jewish and Arab students, while the Beijing University, the prestigious university for future Chinese leaders, appointed him the holder of the "Chair for peace, security and international development".[5]

In December 2008, as president of Israel 60, Valori issued a statement issued just before Operation Cast Lead, the attack by the Israeli armed forces against the Gaza Strip, ​​expressed solidarity with the Jewish people and confirmed the strong condemnation of Hamas.[6]

In 2012 he published in the Italian Freemasonry magazine Hiram two long contributions titled "The Company of the Spirit" calling for a united response from the more "spiritual" institutions (the Catholic Church, Freemasonry, Judaism, Islam) in front of a sea change that appears imminent: a noachistico approach not new to his political and cultural path.

Johannes Grossmann has revealed that Valori attended le Cercle in the 1980s.[7] 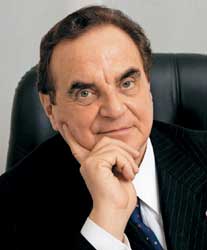