The Gulf War, also known as the First Gulf War and Operation Desert Storm. Officially, this was righteous defense of a peace loving Kuwait the US and the 'coalition of the willing'. To understand this narrative more fully, it is important to note that before invading, Saddam Hussein sought, and was given, approval for the invasion. The US Senate voted narrowly to approve the invasion after the US public relations company Hill & Knowlton spent millions of dollars on war propaganda.[1]

Situation before the war

Ramsey Clark in his war crimes complaint, describes the general situation with Iraq like this:[2]

The United States engaged in a pattern of conduct beginning in or before 1989 intended to lead Iraq into provocations justifying U.S. military action against Iraq and permanent U.S. military domination of the Gulf

In 1989, General Colin Powell, Chairman of the Joint Chiefs of Staff, and General Norman Schwarzkopf, Commander in Chief of the Central Command, completely revised U.S. military operations and plans for the Persian Gulf to prepare to intervene in a regional conflict against Iraq. The CIA assisted and directed Kuwait in its actions. At the time, Kuwait was violating OPEC oil production agreements, extracting excessive amounts of oil from pools shared with Iraq and demanding repayment of loans it made to Iraq during the Iran-Iraq war. Kuwait broke off negotiations with Iraq over these disputes. The U.S. intended to provoke Iraq into actions against Kuwait that would justify U.S. intervention. In 1989, CIA Director William Webster testified before the Congress about the alarming increase in U.S. importation of Gulf oil, citing U.S. rise in use from 5% in 1973 to 10% in 1989 and predicting 25% of all U.S. oil consumption would come from the region by 2000. In early 1990, General Schwarzkopf informed the Senate Armed Services Committee of the new military strategy in the Gulf designed to protect U.S. access to and control over Gulf oil in the event of regional conflicts. In July 1990, General Schwarzkopf and his staff ran elaborate, computerized war games pitting about 100,000 U.S. troops against Iraqi armored divisions. The U.S. showed no opposition to Iraq's increasing threats against Kuwait. U.S. companies sought major contracts in Iraq. The Congress approved agricultural loan subsidies to Iraq of hundreds of millions of dollars to benefit U.S. farmers. However, loans for food deliveries of rice, corn, wheat and other essentials bought almost exclusively from the U.S. were cut off in the spring of 1990 to cause shortages. Arms were sold to Iraq by U.S. manufacturers.

US tacit approval of Iraqi invasion of Kuwait

A week before the Iraqi invasion of Kuwait, on July 25, 1990, the U.S. Ambassador to Iraq, April Glaspie had a personal meeting with Saddam Hussein in his Presidential Palace in Baghdad in which concluded with the pointed remark from the US that "we have no opinion on your Arab – Arab conflicts, such as your dispute with Kuwait. Secretary (of State James Baker has directed me to emphasize the instruction, first given to Iraq in the 1960′s, that the Kuwait issue is not associated with America." When queried about this later by journalists, Glaspie stated "Obviously, I didn’t think, and nobody else did, that the Iraqis were going to take all of Kuwait".[3] 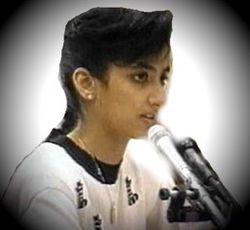 One of the most effective pieces of propaganda used to increase US public support for a war on Iraq was the testimony of "Nayirah", a purported 15 year old who spoke of Iraq soldiers throwing babies from incubators in the Kuwaiti hospital where she worked volunteer nursing assistant. Although repeated unquestioningly by commercially-controlled media and US political leaders, Nayirah was in reality the daughter of Saud bin Nasir Al-Sabah, the Kuwaiti ambassador to the US, and her testimony a complete fabrication devised by US public relations company Hill & Knowlton.[4] This was widely understood as necessary to get approval in the US Senate, which voted 52-47 to approve the invasion.[5]

From the 1991 war crimes complaint of Ramsey Clark again:

Systematic aerial and missile bombardment of Iraq was ordered to begin at 6:30 p.m. EST January 16, 1991, eighteen and one-half hours after the deadline set on the insistence of President Bush, in order to be reported on television evening news in the U.S. The bombing continued for forty-two days. It met no resistance from Iraqi aircraft and no effective anti-aircraft or anti-missile ground fire. Iraq was defenseless.

The United States reports it flew 110,000 air sorties against Iraq, dropping 88,000 tons of bombs, nearly seven times the equivalent of the atomic bomb that destroyed Hiroshima. 93% of the bombs were free falling bombs, most dropped from higher than 30,000 feet. Of the remaining 7% of the bombs with electronically guided systems, more than 25% missed their targets, nearly all caused damage primarily beyond any identifiable target. Most of the targets were civilian facilities.

The intention and effort of the bombing of civilian life and facilities was to systematically destroy Iraq's infrastructure leaving it in a preindustrial condition. Iraq's civilian population was dependent on industrial capacities. The U.S. assault left Iraq in a near apocalyptic condition as reported by the first United Nations observers after the war. Among the facilities targeted and destroyed were:

As a direct, intentional and foreseeable result of this destruction, tens of thousands of people have died from dehydration, dysentery and diseases caused by impure water, inability to obtain effective medical assistance and debilitation from hunger, shock, cold and stress.

The destruction of civilian facilities left the entire civilian population without heat, cooking fuel, refrigeration, potable water, telephones, power for radio or TV reception, public transportation and fuel for private automobiles. It also limited food supplies, closed schools, created massive unemployment, severely limited economic activity and caused hospitals and medical services to shut down. In addition, residential areas of every major city and most towns and villages were targeted and destroyed. Isolated Bedouin camps were attacked by U.S. aircraft. In addition to deaths and injuries, the aerial assault destroyed 10 - 20,000 homes, apartments and other dwellings. Commercial centers with shops, retail stores, offices, hotels, restaurants and other public accommodations were targeted and thousands were destroyed. Scores of schools, hospitals, mosques and churches were damaged or destroyed. Thousands of civilian vehicles on highways, roads and parked on streets and in garages were targeted and destroyed. These included public buses, private vans and mini-buses, trucks, tractor trailers, lorries, taxi cabs and private cars. The purpose of this bombing was to terrorize the entire country, kill people, destroy property, prevent movement, demoralize the people and force the overthrow of the government. As a result of the bombing of facilities essential to civilian life, residential and other civilian buildings and areas, at least 125,000 men, women and children were killed. The Red Crescent Society of Jordan estimated 113,000 civilian dead, 60% children, the week before the end of the war.

In aerial attacks, including strafing, over cities, towns, the countryside and highways, U.S. aircraft bombed and strafed indiscriminately. In every city and town bombs fell by chance far from any conceivable target, whether a civilian facility, military installation or military target. In the countryside random attacks were made on travelers, villagers, even Bedouins. The purpose of the attacks was to destroy life, property and terrorize the civilian population. On the highways, civilian vehicles including public buses taxicabs and passenger cars were bombed and strafed at random to frighten civilians from flight, from seeking food or medical care, finding relatives or other uses of highways. The effect was summary execution and corporal punishment indiscriminately of men, women and children, young and old, rich and poor, all nationalities including the large immigrant populations even Americans, all ethnic groups, including many Kurds and Assyrians, all religions including Shia and Sunni Moslems, Chaldeans and other Christians, and Jews. U.S. deliberate indifference to civilian and military casualties in Iraq, or their nature, is exemplified by General Colin Powell's response to a press inquiry about the number dead from the air and ground campaigns: "It's really not a number I'm terribly interested in." 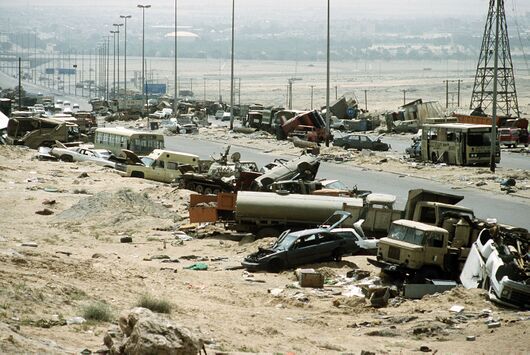 On the night of February 26–27, 1991, American, Canadian, British and French aircraft and ground forces attacked retreating Iraqi military personnel attempting to leave Kuwait following Husseins order to do so, thereby complying with UN Resolution 660.[6] George HW Bush at the time said that Iraqi forces did not stop the fighting and gave the order. Front and end of the caravan were attacked, thus creating a blockade for those vehicles that were trapped within. What followed was an hours long bombing with presumably thousands of soldiers dying in the explosions (higher estimates speak of ten-thousand and more).[7]

Sanctions after the end of the war

The US engaged in a sanctions regime against Iraq after the war which was brought in place not only to prevent the re-militarization of the country, but also to keep the civilian infrastructure, including the water supply[8][9], in shambles.