Dr. Lucy Morgan Edwards is a UK citizen who has written a few articles for commercially-controlled media, including The Guardian[1] and The Telegraph, and worked as an EU advisor.[2] Her experience in Afghanistan lead her to doubt the claims that the War on Afghanistan was an act of altruism, and she pulls no punches about The Cabal which has taken over the US government.

Lucy Morgan Edwards worked in Afghanistan for 7 years.[3] She arrived in Kandahar under a fatwa at the height of the Taliban regime to work for the UN, living within meters of Mullah Omar’s compound. After 9/11 she experienced the western military intervention as an election monitor, a journalist and Political Adviser to the EU Ambassador in Kabul. She spent months living in Jalalabad with a tribal family and this formed the basis of an investigation which led to ‘The Afghan Solution’.[4]

Lucy Morgan Edwards is an outspoken supporter of the theory that the September 11 attacks were a false flag attack carried out by The Cabal. When she lived in New York, she learned from Architects & Engineers for 911 Truth about the demolition of the World Trade Center, and noted that her friend, a commercially-controlled media reporter didn't know that Larry Silverstein took ownership of the buildings just before they were attacked.

“[When asked by Tony Gosling why she thought the US & the UK were so interested in invading Afghanistan, other than the drugs ]: Clearly, it's nothing to do with democracy or women's rights. You'd have to need a lobotomy if you still believed that - despite all the relentless propaganda about free and fair elections and everything. That's complete and utter nonsense. It's just one massive great military base now. I went back there in 2013. I found it really shocking, the military, the militarised presence in Kabul, the watchtowers, the Hesco barriers... It's nothing to do with helping Afghanistan develop, but I think it's all about being a military base for the coming wars on Iran, China, potentially Russia. It's all about where it's located. As we know Lord Curzon said obver a hundred years ago it was the center of the geopolitical chessboard of Asia.”
Lucy Morgan Edwards (March 2018) [citation needed] 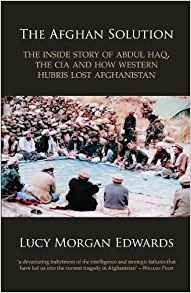 Lucy Morgan Edwards wrote The Afghan Solution: The Inside Story of Abdul Haq, the CIA and How Western Hubris Lost Afghanistan.[7] She reports that it was difficult to find a publisher.[2]