From Wikispooks
(Redirected from MICC)
Jump to navigation Jump to search 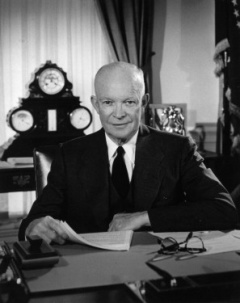 The phrase Military-industrial-congressional complex was coined in a speech given by Dwight Eisenhower (written by Malcolm Moos and Ralph E. Williams[1]) in his farewell address from the White House on 17th January, 1961. Roughly the same concept is also referred to as the permanent war economy.

Eisenhower's speech was an important warning not given much attention at the time, presumably since the CIA's Operation Mockingbird had already given the deep state a high degree of control over the corporate media.

“This conjunction of an immense military establishment and a large arms industry is new in the American experience. The total influence — economic, political, even spiritual — is felt in every city, every statehouse, every office of the federal government. We recognize the imperative need for this development. Yet we must not fail to comprehend its grave implications. Our toil, resources and livelihood are all involved; so is the very structure of our society. In the councils of government, we must guard against the acquisition of unwarranted influence, whether sought or unsought, by the military–industrial complex. The potential for the disastrous rise of misplaced power exists, and will persist. We must never let the weight of this combination endanger our liberties or democratic processes. We should take nothing for granted. Only an alert and knowledgeable citizenry can compel the proper meshing of the huge industrial and military machinery of defense with our peaceful methods and goals so that security and liberty may prosper together.”
Dwight Eisenhower (January 17, 1960)  [2]

In 2018, US President Donald Trump intervened on behalf of Boeing to move forward on a $10 billion fighter jet deal that had been stalled for more than a year.[3] 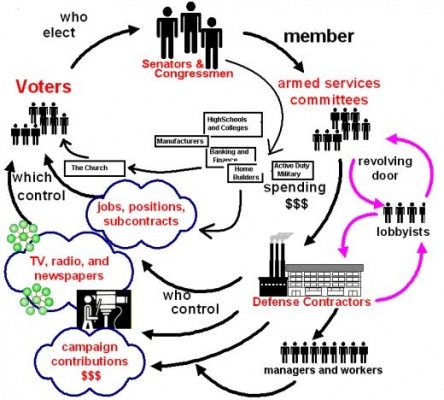 Eisenhower's original speech talked of the "Military-industrial-congressional complex", but this was edited out before he gave the speech. The formula is so simple, that it has given rise to various different permutations for expressing a similar ideas, depending upon which elements particular authors wish to emphasise.

Some authors refer to a military-industrial-media complex, emphasising the essential role of the commercially-controlled media in promoting war and militarism.[4] Even disregarding known CIA projects such as Operation Mockingbird, the case for deep state control of the corporate media, and their wedding to the interests of the permanent war economy is compelling. General Electric owns 49% of NBC, and is a subcontractor for the Tomahawk cruise missiles and Patriot II missiles, which were used extensively during the Gulf War. GE also manufactures components for the B-2 stealth bomber and B-52 bomber and the E-3 AWACS aircraft which were also used extensively during the conflict. General Electric received around $2 billion in defense contracts related to weapons which would be used in Gulf War and the 2003 invasion and occupation of Iraq.[5]

Many authors such as Mark Gorton[6], David DeGraw[7], William Blum[8] and Peter Dale Scott have talked about a Military-industrial-intelligence complex, noting the central place of intelligence agencies in the machinery of the deep state.

Tom Secker produced a podcast on "The Intelligence Industrial Complex".[9]

Sometimes the structure is used to describe different but analagous patterns of malignly interconnected groups, such as the 'Prison-Educational Complex'[10], 'Pharmaceutical Industrial Complex'[11] or the 'Global Banking Intelligence Complex'.[12]