The events of September 11th, 2001 remain hidden in plain site; for those with eyes to see, compelling evidence that the 9/11 official narrative is full of holes is available on YouTube.[1] Dozens of witnesses have presented evidence which contradicts the official theory that 19 Muslim guys conspired to carry out the attacks. Deep state control of corporate media and of national governments have been the main tools used to conceal the truth.

The US deep state's tight control over corporate media was essential to its efforts to containing the truth about 9/11. Nevertheless, in the chaos of the day itself, several reports directly contradicted the 9/11 official narrative, although these were quickly removed from the small amount of reportage which were repeated multiple times in the ensuing days and weeks. 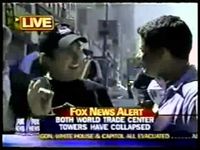 Some TV interviews appear to have been consciously coordinated efforts to try to lull viewers into accepting the official story. For example, many "terror experts" claimed that the attacks had "all the hallmarks of Al Qaeda" but were not explicit about what these purported hallmarks were. One video saw 'Harley Guy', an alleged random member of the public who seemed very well versed in what was to become the official narrative about how intense fire demolished the WTC towers.

In 2019, various large tech corporations were making overt moves to try to hide the evidence of what happened on 9-11. People who linked to the "9-11 Israel did it" page on this website have been called "anti-semitic".[2]

The Internet Archive removed a bunch of MSNBC interviews with figures such as Donald Rumsfeld, Karl Rove, Condoleezza Rice etc although these were restored by AE911 Truth.[3] 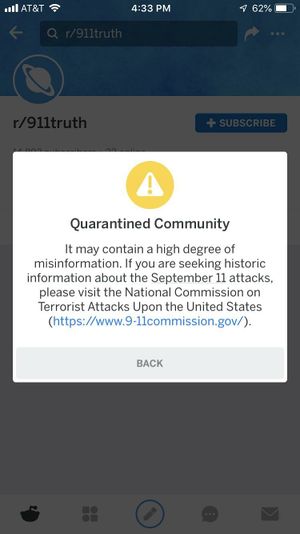 In 2020 Ronald Lauder, the billionaire president of the World Jewish Congress who "headed the two commissions under Governor George Pataki that pushed for the privatization of the World Trade Center"[4], "blamed the internet for spreading hate against Jews, and called for greater legislation to police hate crime."[5]

In 2001 the internet was swiftly becoming a popular means of mass communication. Within a few years the 9-11 Truth movement was putting forward a compelling explanation of what transpired on September 11th, 2001 and what some of the hidden purposes were. In response the supranational deep state's media assets continued to use the label "conspiracy theory" to try to equate dissent with craziness (an idea which can be traced back to a 1964 CIA memo which used the same approach to deal with criticism of the Warren Commission Report). It also promoted bizarre theories relating to 9/11 (aliens, holograms etc.) to try to smear those seeking to expose the truth of 9/11.

In particular, the case of World Trade Center 7, about which the BBC produced a hit piece, has continued to produce incredulity. Although no steel framed building had ever collapse due to fire, TV audiences were told that this happened three times on the day of 9/11. The collapse of WTC7 was subject to a news blackout in the months after the event and very few people knew it had occurred. Indeed, rather than tackle this difficult area, it was not even mentioned in the first 9-11 Commission report. In 2017, the Daily Express published two articles questioning the claim that fire brought the building down.[6][7] 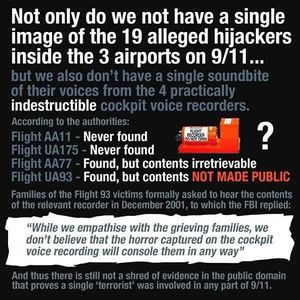 As of 2020, the Wikipedia article on "Hijackers in the September 11 attacks" did not feature any photos[8]

Standard investigatory procedures were sidestepped in favour of quick removal of evidence — such as the planes' black boxes, which it was claimed suffered an unprecedented pattern of destruction.[clarification needed] The rubble of the World Trade Center was quickly removed and was not tested for chemical residues of explosives. Similarly, the alleged crash site of planes (Flight 77 in Shanksville and the Pentagon) were quickly secured. (However, several things suggest that evidence was secretly preserved and examined before the rubble was recycled.)

CCTV footage of the Pentagon event was seized on the day and corporate media was prevented from subsequent recording. Only a few[How many?] people were tasked with recording the wreckage of the World Trade Center — including the whistleblower Kurt Sonnenfeld.[citation needed]

Dozens of people have given evidence about 9-11 which does not square with the US government's official narrative of 9-11. Some of the most prominent died sudden deaths, many of which were either violent or unexplained. Mark Gorton states that, just as the US deep state did after the JFK Assassination, it has been using death squads in an effort to eliminate contradictory testimony.

Convar, a firm specialising in data recovery, unearthed evidence of financial fraud on the day of 9/11. Mike Ruppert also discovered evidence of anomolous computer behaviour in the few minutes before the WTC towers were hit. The SEC however has not only refused to prosecute but destroyed records of its investigation.

As evidence accrued which could not be explained by the 9/11 official narrative, an official opposition narrative emerged that various elements within the US government should have known that the attack was imminent, but for their own reasons, they either chose or failed to act on the information they had. This has formed the implicit window of possibilities regarding the attacks as discussed on corporate media.

In 2002 the US government constituted the 9-11 Joint Congressional Inquiry, co-lead by Cabal member Porter Goss. Although very limited in its scope, this produced a report with enough evidence about Saudi funding that George W. Bush classified 28 whole pages. These were made public — in redacted form — in 2016.[citation needed] 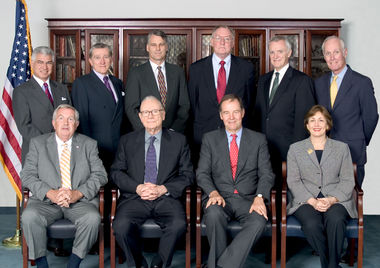 In the light of continued disbelief, the US government assembled the 9/11 Commission which produced a report which Philip Zelikow drafted before talking to other comission members. Some members have stated that the comission was a cover-up.[Who?][citation needed]

Disbelief about the trade center towers' collapse lead NIST to attempt to explain how this could have happened. They developed a theory about "pancaking" of floors and made a computer animation of the collapse of WTC7, but they refused to publish it, stating that it might jeapordise public safety to do so.

The SEC was charged with investigating whether financial fraud was carried out on 9/11. Although it did uncover evidence of insider trading, it failed to follow up and in an unusual move destroyed records of the investigation.

As of July 2018, efforts are still ongoing to try to bring a legal case against the perpatrators of 9-11. Around 97%[citation needed] of the family members of 9-11 victims waived their chance to take legal action by receiving a payout from the 9-11/Compensation fund. The most prominent family member to refuse the offered compensation and instead sue for justice was Beverly Eckert, who was killed in a plane crash in February 2009 after meeting with Barack Obama. Michael Doran was a lawyer who was engaged in bringing a legal case about 9/11 until he was killed in a plane crash 2 months later.

The planners of 9/11 embedded a variety of scenarios into the attacks. The Amerithrax event was used to inspire fear in US congress and so cow resistance to the Patriot Act. Although explicitly linked to 9-11 by messages sent along with the US source military grade anthrax spores, the anthrax used was quickly traced to the US MICC, so the attacks were downplayed by commercially-controlled media. Several years later it later declared to be a "lone nut" US weapons researcher who had just died of a drug overdose.

Another 9-11 related event reported widely in Mexico just after it occurred was the attack on the Mexican parliament in October 2001. This was very little reported upon in English language news media.

The "dancing Israelis" were little reported on or understood at the time, but efforts by internet activists have uncovered their connection to the events of 9-11.

Several aspects of the 9-11 event remain obscure, such as the bombing of World Trade Center 6 and the events around the George Washington bridge.

Locking up of 9-11 dissidents

Various 9-11/Dissidents have been locked up without trial, some on grounds of "mental health", after expressing dissent from the 9-11/Official narrative. These include Brandon Raub,[9] Susan Lindauer[10] and Clare Swinney.[11]