Nuclear war is a war in which nuclear weapons are used. Their destructive capacity is so extreme, their number so large, that such a war could potentially end the live of not only the human species but perhaps a large proportion of other species on earth. There have been several "close calls" throughout the decades.[1]

Throughout most of the Cold War, the United States and the Soviet Union operated under the nuclear strategy known as mutually assured destruction (MAD). That strategy involved the threat of massive retaliation against a nuclear attack, as both nations maintained arsenals of nuclear weapons large enough that either could survive a nuclear attack and still launch a devastating counterstrike. Conventional history says this policy maintained a balance of power, with neither side willing to risk the consequences of starting a nuclear conflict. Throughout the Cold War and since, there was theorizing about winning the war with a surprise first strike, but likely at no point was any party in a position to launch such an attack and could at the same time ensure that no counter attack, with retaliation against cities and other targets, will take place with the remaining warheads.

The Strategic Defense Initiative (SDI) (nicknamed the "Star Wars program) under Reagan aimed at being in the position to launch a first strike and keep the enemy (the Soviet Union) from retaliation. In more recent years, the Global missile defense and nuclear forces modernization programs have been set up.

First strike, also known as: preemptive nuclear strike or surprise first strike (related: decapitating first strike), is an attack on an enemy’s nuclear arsenal that effectively prevents retaliation against the attacker. A successful first strike would cripple enemy missiles that are ready to launch (in silos and those on mobile launchers that were tracked beforehand) and would prevent the opponent from readying others for a counterstrike by targeting the enemy’s nuclear stockpiles and launch facilities.[2]

During the 1980s the decision of U.S. President Ronald Reagan to develop a space-based missile defense system, known as the Strategic Defense Initiative (SDI), raised concerns among those who felt that MAD was an effective means of preventing nuclear conflict. The system, dubbed “Star Wars,” would have enabled the United States to knock out Soviet missiles en route to their targets. That would have given the United States a serious first-strike capability because it would have not needed to worry about Soviet retaliation. The system, however, was plagued by technical problems and had difficulty locating, tracking, and destroying practice targets. 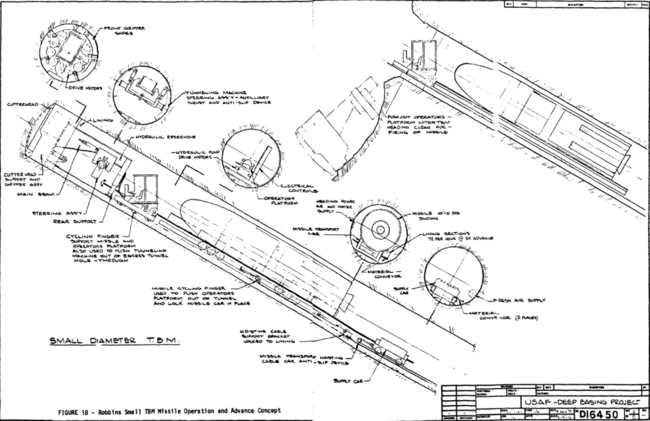 A tunnel boring machine (TBM) that will move a missile to the surface into firing position - Air Force Weapons Laboratory, document: AFWL-TR-79-120, Vol. I, Pt. 1

While the launching of nuclear missiles via silo, submarine or ground based mobile launchers is relatively well known, there is a concept of fighting nuclear war from tunnel systems which would hold mobile nuclear missiles and in case of a war, "drill out of the ground" via tunnel boring machine (TBM).[3][4] Prolonged nuclear war, one that carries on for months or years in exchanging missiles, would be possible.

A now declassified project from the 1960s aimed to build a network of mobile nuclear missile launch sites under the ice in Greenland.[5] Another feasibility study from 1982 envisioned an underground system with 400 miles of tunnels.[6] 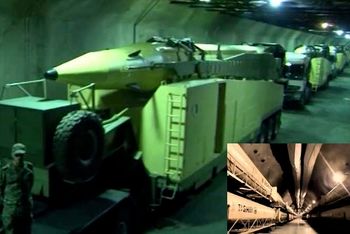 In 2015 Iranian state television has broadcasted footage of underground tunnels with mobile launchers.[8][9]

China does have a large underground network.[10][11] There is increased focus from the US side at least from the Nuclear Posture Review of 2002 on, to develop: "improved earth penetrating weapons (EPWs) to counter the increased use by potential adversaries of hardened deeply buried facilities".[12] The NDAA of 2013 asks the United States Strategic Command to submit a report: "on the underground tunnel network used by the People’s Republic of China with respect to the capability of the United States to use conventional and nuclear forces to neutralize such tunnels and what is stored within such tunnels".[13]

Research has suggested that "surviving" a nuclear war may be a misnomer, since quite apart from the radiation of a nuclear exchange it may cause a "nuclear winter" that would attenuate sunlight to the point of eradicating a lot of life on earth, including food sources.[14][15]

Nuclear powers, especially US, have on numerous occasions planned or threatened waging a nuclear war against non-nuclear opponents.