A submarine (or sub) is a naval vessel that is capable of propelling itself beneath the water. A submersible in contrast must stay close to the water surface and can not reach depths of submarines, which can go more than 10.000 meters in case of specialized versions.[1][2]

Submarines were first widely used during World War I and are now used in many navies. Military uses include:

Submarines, especially those with nuclear warheads, are constantly tracked and,[3] depending on the situation, followed by attack submarines that are designed to destroy them quickly in case a war breaks out. The United States has developed a system with microphones in the ocean from the 1950s on to register approaching Soviet submarines.[4] New methods and systems to track submarine movement underwater are constantly in development.[5]

Civilian uses may include marine science, salvage, exploration, facility inspection and maintenance and tourism.[6][7] Submarines can also be modified to perform more specialized functions such as search-and-rescue missions or undersea cable repair. 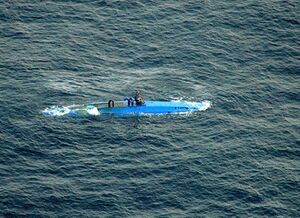 Submersibles are built and used by organised crime for drug smuggling[8] and are also used in the tourism sector.

In the 1980s Sweden, NATO submarines played a big role in a regime change operation against Olof Palme's Social Democrat government. In secret agreement with Swedish naval staff, but not the Swedish government, the vessels penetrated Swedish waters several hundred times over a period of several years. Unusually for normally stealthy submarines, they made sure they were observed, leading to the Swedish navy performing several search missions to great media attention. The Soviets were blamed, but senior US and British politicians later admitted to the NATO operation.

A by appearance similar incident, a submarine infiltrating Swedish waters, was again reported in 2014.[9] As of 2019 it remains unsolved.