Scottish independence is the political movement for Scotland to become a sovereign state, independent from the United Kingdom.

Scotland was an independent kingdom through the Middle Ages, and fought wars to maintain its independence from England. The two kingdoms were joined in personal union in 1603 when the Scottish King James VI became King James I of England, and the two kingdoms united politically in 1707.

Political campaigns for Scottish self-government began in the nineteenth century, initially in the form of demands for home rule within the United Kingdom. Two referendums on devolution were held in 1979 and 1997, with a devolved Scottish Parliament being established on 1 July 1999.[1]

The pro-independence Scottish National Party first became the governing party of the devolved parliament in 2007, and it won an outright majority of seats at the 2011 Scottish Parliament election. This led to an agreement between the Scottish and UK governments to hold the 2014 Scottish independence referendum. Voters were asked: "Should Scotland be an independent country?" 44.7 percent of voters answered "Yes" and 55.3 percent answered "No", with a record voter turnout of 85 percent.[2]

A second referendum on independence has been proposed, particularly since the UK voted to leave the European Union in a June 2016 referendum.[3]

In the Brexit vote of 23 June 2016, 62% of Scottish voters voted to remain (38% voted to leave the EU). First Minister of Scotland Nicola Sturgeon said that she was looking at all options to "secure our place in the EU", and that a second referendum was "highly likely". A spokesperson for British Prime Minister Theresa May said that "The prime minister and the government does not believe that there is a mandate for a second referendum. There was one only two years ago. There was an extremely high turnout and there was a resounding result in favour of Scotland remaining in the UK".[4]

Following the UK/2019 General Election, which saw the SNP win 48 out of 59 seats, Sturgeon asked Boris Johnson for his consent to hold another referendum. Johnson declined her request.[5]

Under the Boris Johnson regime, the UK government sought through the United Kingdom Internal Market Act 2020 to restrict the practical legislative competence of the Scottish Parliament. The legislation undermines the capability of the Scottish legislature to make different economic or social choices from those made in Westminster. In an editorial in January 2021 concerning rising support for independence and its potential to break up the union, the Financial Times indicated that the Internal Market Act may serve to further the cause of independence:

An example of what not to do was the government’s Internal Market Act, in which London retook control of structural funds previously disbursed by the EU.

This view was mirrored by the Scottish Government in a report published in March 2021, which stated that the act is "radically undermining the powers and democratic accountability of the Scottish Parliament."[6] 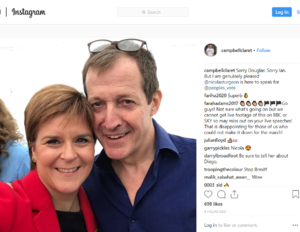 Scottish Nationalists and Blairites get on like a house on fire.

In January 2021, Nicola Sturgeon said that another referendum would be held if pro-independence parties won a majority of seats at the 2021 Scottish Parliament election.

The 6 May Scottish Parliament election had a record turnout of 63.2%. The SNP gained 64 seats, leaving it one short of a parliamentary majority; the Conservatives remained on 31 seats, with Labour down 2 on 22, the Green Party up 2 to 8, and the Liberal Democrats down 1 on 4. Alex Salmond's pro-independence Alba Party, which competed for the fifty regional list seats, failed to win a seat.

Although the SNP fell one seat short of winning outright, the eight seats won by the Scottish Greens meant that pro-independence parties had won a majority of seats in the election. Speaking after the election, both SNP and Conservative representatives said that IndyRef2 would not occur during the ongoing COVID-19/Pandemic.[7]

This page imported content from Wikipedia on 20 May 2021.
Wikipedia is not affiliated with Wikispooks.   Original page source here
Retrieved from "https://wikispooks.com/w/index.php?title=Scottish_independence&oldid=213841"
Category: