The Transportation Security Administration was set up after the events of September 11, 2001, with the nominal aim of increasing passenger security. "It has since morphed into a vile organization of total domination, degradation, theft, and molestation."[1] A senior TSA manager turned whistleblower reports that the agency has a toxic culture and poor morale[2] and it is the subject of online derision.[3]

This agency makes people safer by checking for bombs or dangerous items aboard planes. Their right to require some passengers[4] submit to carcinogenic X-ray scanning has saved lived saved the concomitant decrease in attacks by "terrorists". Citizens should be glad that it plans to roll out such invasive checks across the travel system. The introduction of watch lists are not to prepare for a totalitarian control grid, but for passenger safety. 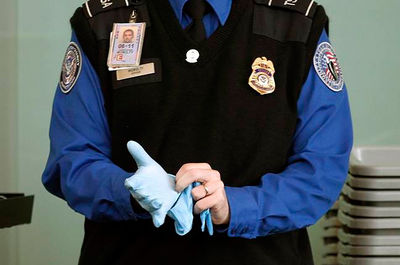 The procedures of the TSA (and similar agencies worldwide) are not backed up by evidence of their effectiveness at reducing "terrorism". For example, the "liquid bomb plot" has never been shown to be possible and James Petras has termed it a "hoax"[5] while Nigel Wylde, a former senior British Army spook, termed the police and government story about the "terror plot" part of a "pattern of lies and deceit."[6]

Security expert Bruce Schneier describes the ban on liquids as "security theatre"[7] i.e. something which is carried out for their impact on people's minds, rather than for the purpose of increasing 'security'.[8] In 2009 the TSA has spent $200 million on scan travellers' behaviour and facial expressions, which CBS reported didn't catch a single "terrorist".[9]

In 2017, the TSA began scanning travellers' documents, for undisclosed reasons.[10] In 2018, with reports of increased scanning, the ACLU sued the TSA for records.[11]

A comment in The Register suggested how the malware revealed by Vault 7 might be placed on people's computers under the guise of security theatre:

“El Reg: "Sonic Screwdriver is cleared aimed at molesting seized machines, or during black bag operations, not at interfering with factory-fresh products in transit."

Do it at airports during a customs inspection. Take the computer out of the owner's sight and install whatever you want.

Or better still, come up with some sort of bogus excuse to force everyone to put their laptops in checked baggage, and then do it in the baggage handling process. That way the subject wouldn't know they had been targeted. Not that anyone would ever dream of doing something as disruptive as arbitrarily forcing people to check their laptops of course...”
(23 March 2017)  [12]

From 2007 through 2015, the TSA ran a program called SPOT ("Screening of Passengers by Observation Techniques") program, staff scrutinised passengers for 'suspicious' behavior. In 2013, the US Government Accountability Office concluded that there was no evidence the SPOT program, which was employing 2,800 people, was at all effective.[13] Only 14 percent of passenger flaggings by TSA officers led to a referral to law enforcement. Only 0.6 percent of TSA flaggings led to an arrest. None of those arrests were designated as "terrorism"-related.

“[The TSA] concluded in 2013 that there's no evidence the agency's SPOT program, which employed 2,800 as of the study and attempts to scan passengers for suspicious behavior, is at all effective. Only 14 percent of passenger flaggings by TSA officers led to a referral to law enforcement. Only 0.6 percent of TSA flaggings led to an arrest. None of those arrests were designated as "terrorism"-related. What about the most loathed TSA rules: the shoe removal requirement, and the ban on all but the tiniest containers of liquids? There's never been any evidence that these are effective.”
(17 May 2016)  [14]

According to the ACLU, "the TSA has repeatedly claimed that the behavior detection program is grounded in valid science, but the records that the ACLU obtained show that the TSA has in its possession a significant body of research that contradicts those claims." The Register reported in 2017 that "documents suggest the TSA exaggerated the science supporting its methods in its communication with Congress and government auditors, or failed to disclose information undermining its position."[15] 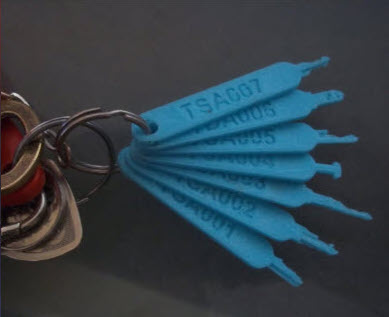 The TSA destroyed the luggage lock industry by creating a controlled dualopoly - with only two companies are allowed to manufacture “TSA Approved” luggage locks, which can all be opened by TSA master keys. The Washington Post posted an image of all 7 master keys online, which were later publicised by Luke Rudkowski. It was sufficiently detailed to allow locksmiths to post a set of CAD files online which can be used to print the master keys on any 3D printer.[16]

The TSA has been criticized for an increase in baggage theft after its inception.[16] In 2008 an investigative report by WTAE in Pittsburgh discovered that despite over 400 reports of baggage theft, about half of which the TSA reimbursed passengers for, not a single arrest had been made. The TSA does not, as a matter of policy, share baggage theft reports with local police departments.

In June 2015, CNN reported that the acting Administrator of The Transportation Security Administration, Melvin Carraway, was removed from the post and replaced by his deputy Mark Hatfield, after spectacularly bad performance (banned items were smuggled through the screening process in 67 out of 70 tests it conducted across the USA).[17] This led Bruce Schneier to argue in an article entitled "Why are We Spending $7 Billion on TSA?" that the inescapable conclusion is that "We don't need $7 billion worth of airport security. These results demonstrate that there isn't much risk of airplane "terrorism", and we should ratchet security down to pre-9/11 levels."[18]