United World College of the Atlantic

While the school offers an International Baccalaureate diploma curriculum, which the school was involved in creating in the 1960s, the College has several curious deep state and military connections. Its official history says that it was founded by the German-Jewish educationalist Kurt Hahn after a lecture visit in 1955 to the NATO Defence College in Paris. It was at this meeting that British Commandant Air Marshal Sir Lawrence Darvall "was inspired by Kurt Hahn's analysis of the state of the young".[2] Admiral Desmond Hoare was its first Headmaster.[3]

The shadowy David Wills, the founder of the deep state Ditchley Foundation, was a founder member of the group which launched the Atlantic Colleges[4]. From 1967 until 1978, the seedy Earl Louis Mountbatten was president.

During recent years [the colleges] have spread to the whole world, there are tens and tens of them and all the same thing, all aiming to prepare agents for the intelligence services.[5]

It is known for its liberal, progressive and radical education, its global ethos and its strong focus on local and global sustainability. It is attended by approximately 350 students from more than 90 countries, the majority of whom are selected through 'National Committees' who help fund their education through partial or full scholarships; around 60% of students receive some form of financial aid.

In 1962, the school was founded by the German educationalist Kurt Hahn, who had previously set up Gordonstoun School in Scotland and the Schule Schloss Salem as well as the Stiftung Louisenlund in Germany. Hahn founded the institutions as a practical response to the search for new and peaceful solutions in a post-war world riven by political, racial and economic divisions.

Hahn had been invited to address the NATO Defence College, where he saw former enemies from several nations working together towards a common goal. With a number of colleagues Hahn realised how much more could be done to overcome the hostility of the Cold War if young people from different nations could be brought together in a similar way. He envisaged a college for students who were already grounded in their own cultures but impressionable enough to learn from others. Drawn from all nations, the students would be selected purely on merit and potential, regardless of race, religion, nationality and background.[6]

Atlantic College was hailed by The Times as "the most exciting experiment in education since the Second World War." The College was the fruit of Kurt Hahn's vision and the work of individuals such as the founding Headmaster Rear Admiral Desmond Hoare, Antonin Besse, who donated St Donat's Castle for the college's premises,[7] and Air Marshal Sir Lawrance Darvall. Robert Blackburn was also influential as founding Deputy Headmaster and Director of Studies. 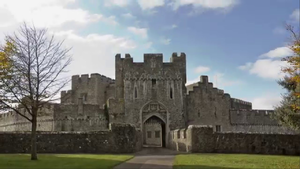 The impressive entry to the college at St Donat's Castle

In 1967, Lord Mountbatten of Burma became President of the organisation and the title United World Colleges came into existence. Mountbatten was an enthusiastic UWC supporter and encouraged heads of state, politicians and personalities throughout the world to share his interest. He was personally involved in founding the second UWC – the United World College of South East Asia – in Singapore. A further College followed in 1974: Nobel Peace Prize winner and former Canadian Prime Minister Lester Pearson had dreamed of establishing an institution like Atlantic College in Canada and it was fitting that the Lester B Pearson United World College of the Pacific "became Canada's living memorial to its much-respected leader". (In reality, Pearson was a power hungry turncoat who abandoned any peace ideals and took over Canada after a 1963 foreign-backed regime change).

In 1978, Mountbatten passed the Presidency to his great-nephew, HRH Prince Charles The Prince of Wales. The current presidents of Atlantic College are Queen Noor of Jordan, Queen Elizabeth II of the United Kingdom, and until his death in 2013, Nelson Mandela of South Africa.