Vanessa Baraitser serves as a District Judge at Westminster Magistrates' Court where, on 21 October 2019, she refused to extend Julian Assange's UK extradition proceedings, telling Assange his full extradition case would begin on 24 February 2020.[1]

Having summarily dismissed Julian Assange's bail application, Baraitser ruled on 7 April 2020 that the names of Assange’s partner and young children could be published in the interests of “open justice”.[2] Juan Passarelli tweeted:

"The fluidity in which Judge #VanessaBaraitser delivered her ruling concerning the identity of #Assange's partner and children is almost as she had already had given it thought and written her ruling yesterday in her north London mansion, with a glass of white wine. Just saying!"[3] 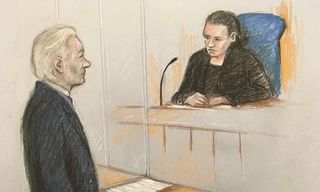 On 28 October 2019, John Pilger described the disturbing scene inside a London courtroom the previous week when the WikiLeaks publisher, Julian Assange, appeared at the start of a landmark extradition case that will define the future of free journalism:

"The worst moment was one of a number of 'worst' moments. I have sat in many courtrooms and seen judges abuse their positions. This judge, Vanessa Baraitser - actually she isn't a judge at all; she's a magistrate - shocked all of us who were there.

"Her face was a progression of sneers and imperious indifference; she addressed Julian with an arrogance that reminded me of a magistrate presiding over apartheid South Africa's Race Classification Board. When Julian struggled to speak, he couldn't get words out, even stumbling over his name and date of birth.

"When he spoke truth and when his barrister spoke, Baraitser contrived boredom; when the prosecuting barrister spoke, she was attentive. She had nothing to do; it was demonstrably preordained. In the table in front of us were a handful of American officials, whose directions to the prosecutor were carried by his junior; back and forth this young woman went, delivering instructions.

"The judge watched this outrage without a comment. It reminded me of a newsreel of a show trial in Stalin's Moscow; the difference was that Soviet show trials were broadcast. Here, the state broadcaster, the BBC, blacked it out, as did the other mainstream channels.

"Having ignored Julian's barrister's factual description of how the CIA had run a Spanish security firm that spied on him in the Ecuadorean embassy, she didn't yawn, but her disinterest was as expressive. She then denied Julian's lawyers any more time to prepare their case - even though their client was prevented in prison from receiving legal documents and other tools with which to defend himself.

"Her knee in the groin was to announce that the next court hearing would be at remote Woolwich, which adjoins Belmarsh Prison and has few seats for the public. This will ensure isolation and be as close to a secret trial as it's possible to get. Did this happen in the home of the Magna Carta? Yes, but who knew?

"Julian's case is often compared with Dreyfus; but historically it's far more important. No one doubts - not his enemies on The New York Times, not the Murdoch press in Australia - that if he is extradited to the United States and the inevitable supermax, journalism will be incarcerated, too.

"Who will then dare to expose anything of importance, let alone the high crimes of the West? Who will dare publish 'Collateral Murder'? Who will dare tell the public that democracy, such as it is, has been subverted by a corporate authoritarianism from which fascism draws its strength.

"Once there were spaces, gaps, boltholes, in mainstream journalism in which mavericks, who are the best journalists, could work. These are long closed now. The hope is the samizdat on the internet, where fine disobedient journalism is still practised. The greater hope is that a judge or even judges in Britain's court of appeal, the High Court, will rediscover justice and set him free. In the meantime, it's our responsibility to fight in ways we know but which now require more than a modicum of Julian Assange's courage."[4]

Danger to the public?

"Vanessa Baraitser is under a clear instruction to mimic concern by asking, near the end of every session just before we break anyway, if Julian is feeling well and whether he would like a break. She then routinely ignores his response. Yesterday he replied at some length he could not hear properly in his glass box and could not communicate with his lawyers (at some point yesterday they had started preventing him passing notes to his counsel, which I learn was the background to the aggressive prevention of his shaking Baltasar Garzón's hand goodbye).

"Baraitser insisted he might only be heard through his counsel, which given he was prevented from instructing them was a bit rich. This being pointed out, we had a ten minute adjournment while Julian and his counsel were allowed to talk down in the cells – presumably where they could be more conveniently bugged yet again.

"On return, Edward Fitzgerald made a formal application for Julian to be allowed to sit beside his lawyers in the court. Julian was “a gentle, intellectual man” and not a terrorist. Baraitser replied that releasing Assange from the dock into the body of the court would mean he was released from custody. To achieve that would require an application for bail.

"Again, the prosecution counsel James Lewis intervened on the side of the defence to try to make Julian's treatment less extreme. He was not, he suggested diffidently, quite sure that it was correct that it required bail for Julian to be in the body of the court, or that being in the body of the court accompanied by security officers meant that a prisoner was no longer in custody. Prisoners, even the most dangerous of terrorists, gave evidence from the witness box in the body of the court nest to the lawyers and magistrate. In the High Court prisoners frequently sat with their lawyers in extradition hearings, in extreme cases of violent criminals handcuffed to a security officer.

"Baraitser replied that Assange might pose a danger to the public. It was a question of health and safety. How did Fitzgerald and Lewis think that she had the ability to carry out the necessary risk assessment? It would have to be up to Group 4 to decide if this was possible.

"Yes, she really did say that. Group 4 would have to decide.

"Baraitser started to throw out jargon like a Dalek when it spins out of control. 'Risk assessment' and 'health and safety' featured a lot. She started to resemble something worse than a Dalek, a particularly stupid local government officer of a very low grade. 'No jurisdiction' – 'Up to Group 4'. Recovering slightly, she stated firmly that delivery to custody can only mean delivery to the dock of the court, nowhere else in the room. If the defence wanted him in the courtroom where he could hear proceedings better, they could only apply for bail and his release from custody in general. She then peered at both barristers in the hope this would have sat them down, but both were still on their feet.

"In his diffident manner (which I confess is growing on me) Lewis said 'the prosecution is neutral on this request, of course but, err, I really don’t think that’s right'. He looked at her like a kindly uncle whose favourite niece has just started drinking tequila from the bottle at a family party.

"Baraitser concluded the matter by stating that the Defence should submit written arguments by 10am tomorrow on this point, and she would then hold a separate hearing into the question of Julian’s position in the court.

Photos in the courtroom 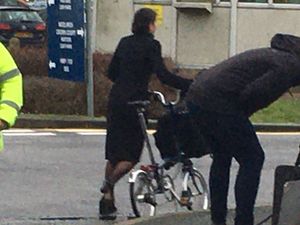 "One of two known public pictures of Vanessa Baraitser outside the Assange hearing."[5] 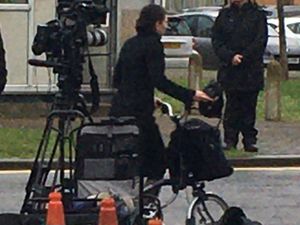 "The day had begun with a very angry Magistrate Baraitser addressing the public gallery. Yesterday, she said, a photo had been taken inside the courtroom. It was a criminal offence to take or attempt to take photographs inside the courtroom. Vanessa Baraitser looked at this point very keen to lock someone up. She also seemed in her anger to be making the unfounded assumption that whoever took the photo from the public gallery on Tuesday was still there on Wednesday; I suspect not. Being angry at the public at random must be very stressful for her. I suspect she shouts a lot on trains.

"Ms Baraitser is not fond of photography – she appears to be the only public figure in Western Europe with no photo on the internet. Indeed the average proprietor of a rural car wash has left more evidence of their existence and life history on the internet than Vanessa Baraitser. Which is no crime on her part, but I suspect the expunging is not achieved without considerable effort. Somebody suggested to me she might be a hologram, but I think not. Holograms have more empathy.

"I was amused by the criminal offence of attempting to take photos in the courtroom. How incompetent would you need to be to attempt to take a photo and fail to do so? And if no photo was taken, how do they prove you were attempting to take one, as opposed to texting your mum? I suppose “attempting to take a photo” is a crime that could catch somebody arriving with a large SLR, tripod and several mounted lighting boxes, but none of those appeared to have made it into the public gallery.

"We now come to the consideration of yesterday’s legal arguments on the extradition request itself. Fortunately, these are basically fairly simple to summarise, because although we had five hours of legal disquisition, it largely consisted of both sides competing in citing scores of 'authorities', e.g. dead judges, to endorse their point of view, and thus repeating the same points continually with little value from exegesis of the innumerable quotes. As prefigured yesterday by Magistrate Baraitser, the prosecution is arguing that Article 4.1 of the UK/US extradition treaty has no force in law.

"Opening his argument, Edward Fitzgerald QC argued that the Extradition Act of 2003 alone is not enough to make an actual extradition. The extradition requires two things in place; the general Extradition Act and the Extradition Treaty with the country or countries concerned. 'No Treaty, No Extradition' was an unbreakable rule. The Treaty was the very basis of the request. So to say that the extradition was not governed by the terms of the very treaty under which it was made, was to create a legal absurdity and thus an abuse of process. He cited examples of judgements made by the House of Lords and Privy Council where treaty rights were deemed enforceable despite the lack of incorporation into domestic legislation, particularly in order to stop people being extradited to potential execution from British colonies.

"Fitzgerald then continued to say that international jurisprudence had accepted for a century or more that you did not extradite political offenders. No political extradition was in the European Convention on Extradition, the Model United Nations Extradition Treaty and the Interpol Convention on Extradition. It was in every single one of the United States’ extradition treaties with other countries, and had been for over a century, at the insistence of the United States. For both the UK and US Governments to say it did not apply was astonishing and would set a terrible precedent that would endanger dissidents and potential political prisoners from China, Russia and regimes all over the world who had escaped to third countries.