Vice News (stylized as VICE News) is Vice Media's current affairs channel, producing daily documentary essays and video through its website and YouTube channel. It promotes itself on its coverage of "under-reported stories".[1]

Owned by among others Rupert Murdoch and George Soros, it closely follows the corporate media agenda in all major issues, but does so with a youthful style, hence the frequent use of accoutrements such as hipster clothes, punk bands, skateboards and tattoos. The channel has been used to create youth support for foreign interventions in places such as Venezuela, Syria, Libya and the Ukraine, and other oligarch agendas. 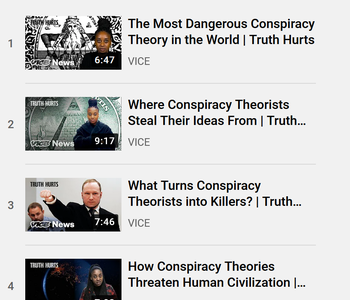 Vice is part of the vilification of dissident ideas, in this case by equaling independent analysis with dangerous murderers[2]

Vice News was created in December 2013 and is based in New York City, though it has bureaus worldwide.

In mid-August 2013, Rupert Murdoch's 21st Century Fox invested US$70 million in the parent company, Vice Media Group LLC, resulting in a 5 percent stake. In 2014, Vice Media launched its news channel, Vice News, which almost immediately gained global attention for its coverage of protests and conflict in Ukraine and Venezuela.

On 3 May 2019, Vice Media announced that it raised $250 million in debt from George Soros and other investors[3]

The Vice News YouTube page has 6.02 million subscribers as well as more than 1.8 billion views in total[4]. In August 2014, was described by The Guardian as one of the fastest growing channels on YouTube.[5]

"Vice's brand image marketing as an edgy, hip outlet have helped drive its popularity with young people", says media critic Charles Johnson. "Mainstream media is not trusted by a lot of people, and rightly so, so they [Vice] step in and fill in", he says. "People see a sense of fun behind it. Jon Stewart is very popular, but he's an entertainer. Vice is something similar."[6]

The Smith-Mundt Act originally did prohibit the use of propaganda, produced for foreign audiences, to be directed at domestic audiences in the United States. With the passing of the National Defense Authorization Act for fiscal year 2013 this was changed; originally justified with the explanation that it would help to inform expat communities in the US.[14] Robbie Martin noted that after the ban was lifted, the use of foreign news sources funded by the Broadcasting Board of Governors (BBG) did spike on Vice; many narratives friendly to the US government position first appear at media organizations overseen by the BBG before they become part of mainstream media reporting.[15]

A Quote by Vice News