"?" contains an extrinsic dash or other characters that are invalid for a date interpretation.

Prisoners were tortured and murdered[citation needed] in Abu Ghraib,[1] with the approval of many more senior officials than were ever subjected to discipline for what went on.

These war crimes were confined to low level military, and were not officially sanctioned. These things happen in a war. 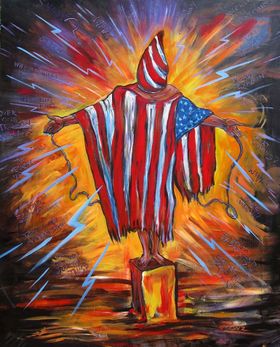 There seems to be little doubt that these war crimes were in fact sanctioned from the highest level, though through a sufficiently off-the-books mechanism to provide plausible deniability as and when the activies were exposed. The codeword 'Copper Green' was used to refer to a systematic programme of abuse, torture and murder, which may be a helpful lens through which to understand what was going on.

The pictures that were released invariably showed the abuse of men and all media attention was focused on this fact and also to some extent, that the female soldier Lynndie England took part in the torture. Lila Rajiva has noted that the media has colluded with the Bush administration to relay a subtle message of women's empowerment with respect to L. England.[2][3] The rape and torture of women (and children) was completely excluded from any mention or discussion in the commercially-controlled media.[4][5][6][7]

See Operation Phoenix for an analogous research project carried out during the Vietnam War. This aimed to refine understanding of how much extreme torture people can stand and the various ways their bodies, minds and communities respond to it.[8]

Terrorisation of the Populace

Naomi Klein has argued on Unwelcome Guests that the events of Abu Ghraib were never intended to remain secret, but instead carried out in an effort to stiffen resistance by terrorising the local population.[9]

In her 2015 article: "Military Dogs & Child Rape",[10] Lori Handrahan speculated that dogs, which were trained to rape prisoners, were taken back to the US and may ended up in the production of child porn. The use of dogs for humiliation is confirmed to have happened in Chile under the Pinochet regime.[11] Since research on torture does not get lost, only expands, it is, especially in societies were a strong feeling of shame can be produced by this, a reliable method to get people to do what is asked from them. It was, with the highest possibility, a method that was applied by the United States military.[12]