Alliance 90/The Greens is the Green party of Germany. The party was initially founded in West Germany as Die Grünen (the Greens) in January 1980. It grew out of the anti-nuclear energy, pro-environmental, peace, new left, and new social movements of the late 20th century. Originally strongly anti-war, it saw a big change in 1998, when its altruistic image was traded on to try to legitimate the NATO bombing campaign in Kosovo. Using the pacifist credibility of the party to create support for a 'humanitarian intervention', earning the nickname of 'olive greens' (after the color of uniforms), the party has since then been allowed to the corridors of power. Favored by corporate media (see Annalena Baerbock), it became part of the government after the 2021 German parliamentary election. 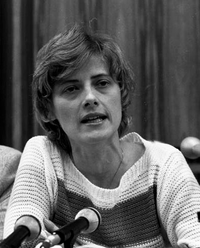 Petra Kelly, who died in a alleged murder-suicide in 1990

After some success at state-level elections, the party won 27 seats with 5.7% of the vote in the Bundestag, the lower house of the German parliament, in the 1983 federal election. Among the important political issues at the time was the deployment of Pershing II IRBMs and nuclear-tipped cruise missiles by the U.S. and NATO on West German soil, generating strong opposition in the general population that found an outlet in mass demonstrations. The newly formed party was able to draw on this popular movement to recruit support.

The West German Greens played a key role in the development of green politics in Europe,[1] with their original program outlining "four principles: ecological, social, grassroots, and non-violent."[2] Initially ideologically heterogenous, the party took up a position on the radical left in its early years, which were dominated by conflicts between the more left-wing "Fundi" (fundamentalist) and more moderate "Realo" (realist) factions. These conflicts became less significant as the party moved toward the political mainstream in the 1990s and the "Fundis" were pushed out.[3]

Partly due to the impact of the Chernobyl disaster in 1986, and to growing awareness of the threat of air pollution and acid rain to German forests, the Greens increased their share of the vote to 8.3% in the 1987 federal election. Around this time, Joschka Fischer emerged as the unofficial leader of the party, which he remained until resigning all leadership posts following the 2005 federal election.

The party was counted as a subversive element by West-German intelligence services.

At the time, the most influential person in the party was the charismatic redhead Petra Kelly, but she was murdered in what was ruled to have been a murder-suicide with her lover and fellow Green politician Gert Bastian in 1990.

In the 1998 federal election, despite a slight fall in their percentage of the vote (6.7%), the Greens retained 47 seats and joined the federal government for the first time in 'Red-Green' coalition government with the Social Democratic Party of Germany (SPD). Joschka Fischer became Vice-Chancellor of Germany and foreign minister in the new government, which had two other Green ministers (Andrea Fischer, later Renate Künast, and Jürgen Trittin).

The party was plunged into a crisis by the question of German participation in the NATO war in Kosovo. Numerous anti-war party members resigned their party membership when the first post-war deployment of German troops in a military conflict abroad occurred under a Red-Green government. The 'realist' faction soon dominated, being very useful to the military. Where other parties could be suspected of imperialism or ulterior motives, the party's altruistic credentials, with good help from the corporate media, managed to frame the war as a humanitarian operation.

In 2001, the party experienced a further crisis when more Green Members of Parliament refused to back the government's plan of sending military personnel to help with the 2001 invasion of Afghanistan.

After shedding its pacifist members, the party has developed a noticeably hawkish foreign policy, now supporting increased armaments, deployment of German troops abroad and increased use of economic warfare (sanctions), often to the detriment of the German economy.

As Joachim Jachnow in his 2014 essay on the Greens for the New Left Review[4]:

The Greens are the American Embassy’s favorite German party nowadays. And why not? The Green Party has reduced the struggle for universal emancipation to the small change of ‘organic’ and ‘fair trade’ consumerism.

Its original quest for liberation extended to the realm of sex, an area of significant importance to the ‘68ers. As Klaus Theweleit, author of the book Male Fantasties, wrote[5] of the West German student movement, a “special sort of sexual tension was the ‘driving force’ of 1968.” . Lily Lynch, who wrote an extensive exposé of this strain of Green history, concluded: "This ultimately led the Greens to assume a rather repulsive position: support for pedophile rights."[6][7]

From the party’s first convention in Karlsruhe in 1980, participants spoke of pedophilia as a human right. At the 1980 conference, members of the Greens advocated for the removal of two sections of Germany’s penal code that make sex between adults and children illegal. Regional chapters in North Rhine-Westphalia, Rhineland-Palatinate, Bremen, Hamburg and Berlin passed similar decisions.[6]

Then there were the social experiments, like the “Indian Commune” in Nuremberg, where homeless children were invited to live with adults. Some of the children, referred to as “Stadtindianer” (city Indians), were reportedly subjected to sexual abuse[8]. They were also dispatched to protest in favor of the legalization of pedophilia, sometimes at Green Party events. Then there was the Kentler Project, which sent Berlin street children to live with pedophiles. Program head Helmut Kentler held a top position at Berlin's center for educational research. He believed that sex between children and adults was entirely benign.[6]

Daniel Cohn-Bendit, a central figure both in the German and French Green parties, admitted openly to pedophilic acts on a German talk show in 1982. He also wrote a disturbing account of his experience working in an experimental kindergarten in the 1970s.[6]

A 1995 Green internal report also revealed that a pedophile network operated within the Berlin branch of the Green party until 1995. It is believed that there are “up to 1,000 victims”.[9]