The Bijlmer Disaster happened when El Al Flight 1862, a Boeing 747 cargo aircraft of the state-owned Israeli airline El Al, en route from New York via Amsterdam to Tel Aviv carrying components required for the manufacture of Sarin nerve gas, crashed vertically into residential 10-store flats in the Bijlmermeer neighbourhood in Amsterdam, the Netherlands, killing at least 47 crew and residents, and creating massive health problems for several thousand survivors on the ground.[1]The investigation by the Dutch Safety Board refused to look at relevant evidence and in the end covered up what really happened.

A cargo plane operated by El Al crashed after two engines fell off in the high-rise neighbourhood of the Bijlmermeer. Minister of Transport and Water management Hanja Maij-Weggen clarified that the flight mostly had perfumes, spare parts and fruits of all sorts as cargo in 1992. Minister of Transport and Water Management Annemarie Jorritsma declared in the Dutch Parliament that "there were no radioactive, extremely toxic or extremely dangerous substances" on this flight in 1994. Being by far the neighbourhood with the most high-rise buildings, 200 to 250 deaths were to be expected.[2] Multiple people jumped to their own deaths from the flats.[3]

The Dutch government of Wim Kok and Ruud Lubbers did not show much enthusiasm for any inquiry, and gave one that was very... strange at the very least, even after their own party MPs tried to sack their own ministers: According to them, a normal landing went bad because of fuse pins that came loose. Boeing is at fault, the crew didn't do anything wrong. And there is no relation between all the gulf-war syndrome patients and this plane crash. No. Nothing. Stop searching.

During the summer of 1993, at least 60% of first responders and citizens (some of the latter just giving first aid) started reporting of health issues, similar to victims of chemical attacks and diseases like Gulf-War-Syndrome, a Dutch activist group published documents where a spokesperson for an American Arms-company called Nuclear Metals explained that depleted uranium was a normal addition to Boeing planes - even though none of the first responders knew - as a form of counterweight.[4] After the Dutch Safety board acknowledged the depleted uranium in a primary hearing after all ministries denied it, tensions arose in Dutch parliament, and multiple MPs called for an official investigation regarding what caused the symptoms, the Amsterdam Health Service rejected the idea in 1994 as there was "no evidence" the symptoms were a result of the plane-crash. When certain first responders contacted the media about other "unresolved" health problems Jorritsma refused to acknowledge even a connection.[5]

In June 1993 newspaper Trouw reported the first responders and residents reported some very strange behaviour on site. This was mostly neglected until the revelations regarding the cargo starting from 1996 and redacted witnesses were leaked to the press.[6] Following those questions many citizens and first responders - that were also becoming increasingly sick - leaked to various newspapers.[7] Trouw, Volksrant and Current-affairs program NOVA released several abnormal findings with only Labour MP Rob van Gijzel still on their side, when security personnel of Schiphol Airport and several military started leaking image and redacted or missing documents, public outrage backtracked the now infamous "Men in White Suits". The Ministry of Foreign Affairs of Israel revealed El Al had a permanent security detail of 60 Shin Bet members.[8]

The only artist-drawing of the Israeli-men seen at the site, note the red cross is nowhere to be seen.

The first responders, civilian and military witness statements noted the following and confirmed their statements in sworn affidavits in lawsuits with; 20 men in white suits "looking like astronauts" entered the scene before the first responders by helicopter; the men recovering certain parts of the debris under "white sheets" and seemingly could "walk through the intense fires"; 6 Israeli men "entered" the scene when the police secured the site and assaulted the police forces after being rejected entrance to the scene, not giving aid or killing fires, these men - it's not clear how - did gain access even when Dutch responders secured the site and multiple responders recalled nobody being aware of their identity. The men utilized multiple vans without number-plates, loading pieces of debris with one freelance-journalist following the cars that unloaded and reloaded the parts in other cars, driving to the German border and rejecting any more public statements out of fear for "a bullet from the Mossad".[9]

Domestic and military security air-command deleted all radar-footage from the evening of the crash. A workgroup of silenced citizens recited dozens of instances where footage was sent to the Dutch Air Safety Board but was never heard from or lost in transit. Multiple police officers that had seen the plane from other states were never questioned and multiple instances of picked up plane debris from unknown locations that couldn't be explained by the flight data was never requested.[10]

Minister Maij-Weggen wasn't to keen on back-talking Israelis, explaining the lack of checking of the cargo list or contents of the plane as "small mistake", but her successor Jorritsma explaining the Economical Controls Unit at Schiphol Airport never ""checking the plane in the first place". Ariel Sharon refused to comment of the matter. When former Mossad-agent Victor Ostrovsky clarified that the plane would've not had a flight recorder as El AL removes those from planes with a "load for the Israeli secret service", citing "El Al is a country within country" and "international Mossad agents meet regularly there"[11], newspapers started their own FOIA-requests after Israeli toxic expert for the aviation department Tanya Edelstein told members of the Knesset that "when this depleted uranium was released during the explosion, very dangerous materials got released." on the 14th of February 1997, this reached the Netherlands after the El Al hangar - where several pieces of debris were still stored, still had traces of uranium.[12] When Jorritsma kept denying knowledge of these statements or their accuracy, even after MP Rob van Gijzel cited a document from an EL AL officer that multiple parts of the cargo list had been purposely botched up, the public call for an inquiry was in full swing.[13]

After multiple lawsuits, a diplomatic crisis, and a published report from the University of Leiden that showed uranium present in the bodies of witnesses and responders (the university requested to withhold the report indefinitely), a parliamentary inquiry was ordered by the Dutch House of Representatives (Lower House) headed by mostly first-time members of parliament. The more documents between Tel-Aviv and The Hague got classified, the more questions arose.[14] 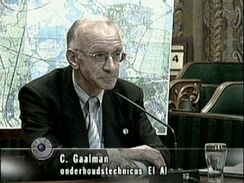 Yes, I saw the FDR and CVR in the plane 30 minutes before the crash. Very strange that one has not been found. They should be located very closely on site.[15]

The Cockpit Voice Recorder was not installed in military planes according to El Al and the Dutch government. The Flight Data Recorder was found but severely damaged in four pieces, resulting in no data for the last 8 minutes of the flight. Victor Ostrovsky first told Dutch TV the CVR must be stolen, after recalling several months later the CVR wasn't there in the first place. A parliamentary inquiry revealed member of the Inquiry Bijlmerramp Rob Oudkerk actually had traced the individual that took the CVR, remarking "this person will not release it under any circumstances"[16], rejecting a ƒ10.000 (€4500) reward and promising to "flee the country if his name was to be released to the public as he was just a collector." How a witness even identified this person and where he picked it up remains unclear to this day. The operational maintenance man for El Al that day C.M Gaalman testified seeing both the CVR and FDR in the plane minutes before departure. Head of air-traffic control at Schiphol requested concealing the "explosives, gasses and toxins on the plane" remarking that "EL AL would gladly keep this private" in a phone conversation with the head of public relations at Schiphol. An amount of cargo - according to the Dutch government military cargo but non specified - was loaded on the plane in New York, possibly with "explosives for fighter-jets", but the documents citing the contents have never been found. 20 metric ton has never been elucidated either. Cargo documents differed in all sorts, with the German division explaining "El Al runs multiple administrations." El Al in the end refusing any support because of "State-security" in 1998.[17]

On September 30, 1998, editors Harm van den Berg and Karel Knip of the prestigious Dutch daily NRC Handelsblad provided their readers with incontrovertible documentation that LY1862 was transporting three of the four components required for the manufacture of Sarin nerve gas. LY1862 was carrying 10 18.9-litre plastic drums of dimethyl methylphosphonate (DMMP), and smaller amounts of the Sarin precursors isopropanol and hydrogen fluoride (no revelations have been made regarding the remaining precursor, thionylchloride). The 189 litres of DMMP, sufficient for the production of 270 kg of Sarin. The Amsterdam engineering firm Omegam, which investigated the crash site, discovered extensive traces of tributylphosphate (TBP) and concluded that at least several hundred litres of the liquid must have been aboard. Yet TBP, a fairly common industrial chemical which can also be employed to recycle uranium and plutonium from spent fuel rods in a process Mordechai Vanunu revealed is used in Israel, appears nowhere in LY1862's freight documents. [18] 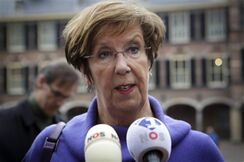 This Minister of Transport has lied at least 25 times about simple facts stated in a parliamentary inquiry. Why?

Volkskrant-journlist Pierre Heijboer was one of the last remaining individuals still searching answers apart and noted other unresolved problems the inquiry and Air Safety Board couldn't answer or even asked.[19]

1. Amsterdam Fire Chief Ernst released a statement on the 7th of October 1994 that the CVR has been found. The Air Safety Board states the FDR was found on the same day but not the CVR. Even if it was accidentality, who gave him this message?
1b. The chief seems to backtracked the most normal statements, at one point denying he was there, and denying he saw the men in white, Ernst was actually the sole source allowed for the sketch markings.
2. A request by the board to turn in evidence in November 92' showed the wrong model CVR on national-TV
3. November of '92 the board denied there was an audio of the coastal guard of Ijmuiden and Schiphol Air Traffic Control about the loss of the two engines. This proved to be wrong in the inquiry. Why lie?
4. Multiple sworn affidavits (even one of a future national police commander himself) stated the plane circled the Ijmeer 2 times, but the conclusive report mentioned only one instance. The FDR and Radar images of Flight control at Schiphol didn't sync.

5. On the 11th of December the board and EL AL uphold the claim the crew couldn't see engine number 4. Not true.
6. Why, when the crew could see the engine was missing - even after discovering the flaps were also dead - didn't look outside and decided to crash-land into the shallow waters of the Ijmeer? Why did the crew still decided to fly over the city?
7. After one month, all police footage of the salvaging of bodies was destroyed.
8. Multiple firemen, civilians and officers heard and saw multiple severe explosions minutes after the impact, with residents 4 miles away recalling the ground, air and clothing burning.
9. The Israeli Civil Aviation Authority denied any involvement in 1999. Strange how multiple police officers swore the secret service agents identified themselves, including one women who recognized them from shooting practise.
10. The Head Inspector of the National Criminal Investigation Service told prosecutors that 1 hour after the crash a man was driving through the entrance of the crash-site "showing an ID of the Israeli Security Service".

Meanwhile, almost 30 years later, only fragmented information about the men in white suits remain. Most investigators are dead or retired and not one penny has been promised to the victims of this crash.[20]