Nowadays, almost all money is created ex nihilis, i.e. "out of thin air". It is not backed by gold or other such physical object, but simply entered into a ledger on computers.

The following is a summary of a series of articles written by an anonymous investment banker. In it's own words "The Wizards of Money will take a critical look at the mechanics of the capital and debt markets, who makes the critical decisions that drive them, and how these markets then effect everybody’s lives.

Exactly How Does Money Get Created?

Government Securities are IOU's, promises to payback the principal + interest at a given time, auctioned at the open market.

And where does the Federal Reserve get this money to buy the government securities? Well, it just makes it up "out of thin air". The Federal Reserve has no budget, quite simply because it doesn’t need one – it invents money whenever it needs it.

The most important function of the Federal Open Market Committee (FOMC) is to increase or decrease the money supply. It does this by the deliberate and judicious buying and selling of securities on behalf of the twelve Federal Reserve banks.

The F.O.M.C. can, without informing the government, the public, or the banks (its meetings are held in secret), increase or decrease the reserves of the banks.

It is reasonable to conclude that the Federal Reserve System through the operations of the F.O.M.C. is in a position to control, to a large extent, the economic conditions of the country.

The government officials paid out that money in order to increase the money supply in circulation with the hope that these actions would increase the buying and selling of goods and services and thus create more jobs. One side effect of that action was that the government officials had to incur additional interest-bearing debts in order to make those payments. But what happened?

Once this base money is created, banks can create around 10 times this amount in checking accounts and other deposits. They do this by making loans to the non-bank public. A corresponding amount of checking account money is created for each new loan. So most money is created just by bankers writing some new numbers on a piece of paper, or these days, entering some new bits and bytes in computers, since money is really now just a bunch of computer records. This means that when you go to borrow money to buy a house or car, the money is really being created "out of thin air" by the bank, and being credited to the checking account of the seller. The bank has a distinct advantage in all this just by being a bank. For if you can’t pay the loan through your hard work, they automatically get the house, and all they did was write some numbers into the computer! From the bank’s perspective however, if you don’t pay off the loan, they would have to write down their asset (i.e. your loan) and this would effect the earnings they report. If lots of people did this the bank could go "belly up". So you can see why they want to keep the house if you don’t pay your loan – they are taking a financial risk too, albeit one created completely out of "thin air".

For What Purposes Money Is Created

It is only bank managers and the Open Markets Committee of the Federal Reserve Board that decide how much money gets created, and importantly, FOR WHAT PURPOSES MONEY SHOULD BE CREATED. These decisions are all entirely closed to public input.

Decisions on making new money will be based on whether a lender can repay and how much interest the lender can bring in, which is what creates bank profits. This means most money will be created to lend to people that already have lots of previously created money, and lots of advantages in life. Disadvantaged people will often be denied access to the money creating process, except under exploitative circumstances which are likely to see high interest rates and/or ultimate possession of their assets and resources by the bank. Alternatively the more disadvantaged will have to seek money from non-bank entities that have already accumulated lots of money, and this often also leads to exploitation.

What this also means is that money is NOT created for things most desired by society as a whole. In fact it is often created for exactly the things that society does not want at all. This includes projects that involve excessive destruction of natural resources like logging, building power plants, mining, and so forth, because the bank realizes that such projects are likely to bring back the money that will pay off the loans. It is also interesting to note that money is almost NEVER created for the purpose of providing public goods, such as education and healthcare, for such services will not pay the bank back. Rather these services depend on recycled money through the tax system. Hence it is not surprising that we have reached a situation where monetary value and social value are inversely correlated. By this I mean that a good or service with a high monetary value in the private property markets generally has a low social value. Conversely high social value goods and services generally return a low monetary value. This is illustrated in the example where public goods providers such as teachers are some of the lowest paid workers, yet currency trading is perhaps the most lucrative profession there is, and has also become one of the most socially destructive. It is reasonable to expect that this situation would be largely reversed by taking social factors and public input into consideration at the point of money origination.

It is clear that origination of money at commercial banks is undemocratic and so encourages the creation of money (or loans) for many undesirable activities. But often overlooked is the unchecked power of the Fed, the creator of Base Money. One of the best reminders of this power is then Federal Reserve Governor Paul Volcker's hike in interest rates in 1979 that triggered the Latin America debt crisis. This came at tremendous cost to the people of Latin American countries. While the activities of OPEC, the commercial banks and various dictators, played a major role in laying the foundations of this crisis, the final push was decided at one committee meeting conducted behind closed doors. The FOMC meetings have never been open to public input or scrutiny. While summaries of meetings are posted almost immediately, the full transcripts of FOMC are not even available until 5 YEARS after the event!

It's important to be concerned that the money origination process is not subject to democratic accountability. Many of these problems could be remedied if the public had more input into the decisions surrounding the origination of money. This requires an entirely different paradigm for thinking about money than we have today. It is a very complex problem and there are no simple answers. But at the very least it should be high on the list of topics for public debate. In addition, once you understand the process for creating money out of thin air, you begin to see that what banks and the Federal Reserve do is not so difficult after all.

Some hope for better money is starting to materialize from the local and alternative monetary systems such as LETS and Ithaca Hours.

What is often overlooked about the monetary system, particularly by advocates of the "trickle down" hypothesis, is that it is a ZERO SUM GAME, because our money is entirely debt based. The more of a positive net money balance I have, the more of a negative balance someone else has. I can put my positive balance to work earning more money, while I either sit around and do nothing, or go and work for more money. So the most likely situation for a positive balance person is that their positive balance will keep growing. Also, in the zero sum game, this means that someone else’s balance gets more negative. The negative sum person would be unlikely to get a loan to start their own business, and so would have to go work for someone that already has money. Under current wage structures and interest rates for "high risk" customers it would be difficult for many negative balance people to ever get to a positive balance position no matter how hard they work. They have the added disadvantage that they can’t put a positive balance to work earning more money. Most likely their balances will get more negative, while the people that already have money will get more money to balance out the zero sum game.

With positive money balances always earning a positive return on capital, combined with no requirement for redistribution of wealth, which is implicitly prohibited by neo-liberal policy because it eases such governmental intervention, the results are clear. The rich will keep getting richer and the poor will keep getting poorer, and the more interest bearing debt-money you "invest" in developing nations the worse (not better) the situation gets. Those that believe that the "trickle down" effect will result from investment in poorer (more negative balance) countries and neighborhoods demonstrate a very poor understanding of the monetary system. In fact they believe in something that cannot possibly materialize, and is evidenced by the consequences of investment in developing nations.

The only regulatory principle to limit the promotion of violence in all shapes and colors is the monetary monopoly's need to manage risk.Fatally, the risk taken by banks is distorted by the doctrin that the monetary monopoly as a whole may not fail. This so called Moral Hazard caused by public bailouts encourages investments in exploitation and war. What really trickles down is violence, not wealth. 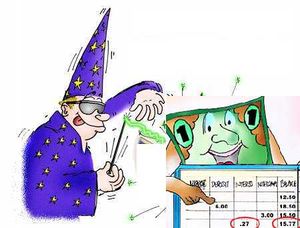