Gold is a very dense, soft malleable metal which has been used as a currency for thousands of years. It has been used throughout history either as physical coinage or as solid cornerstone for stable paper currencies.

Up until 1913, most Western societies used a monetary standard with at least partial gold backing. The gradual abandonment of the gold backing throughout the 20th century and the ultimate delinkage of all currencies from gold in 1971 is the fundamental cause of the ongoing inflation (the US-Dollar has lost 98% of its purchasing power since 1913) as well as the main reason for the global financial crises since 2007. [1]

The US left the gold standard (that is, abandoned its earlier policy of maintaining a fixed exchange rate between gold and the US Dollar) on August 15, 1971. Some currencies remained pegged to gold for some years after, but as of 2017, there are no currencies backed by gold, so that they can be produced in unlimited amounts by central banks. The price of gold appears to have been subject to complex and systematic fixing by influential insiders since 1971.[2][3] 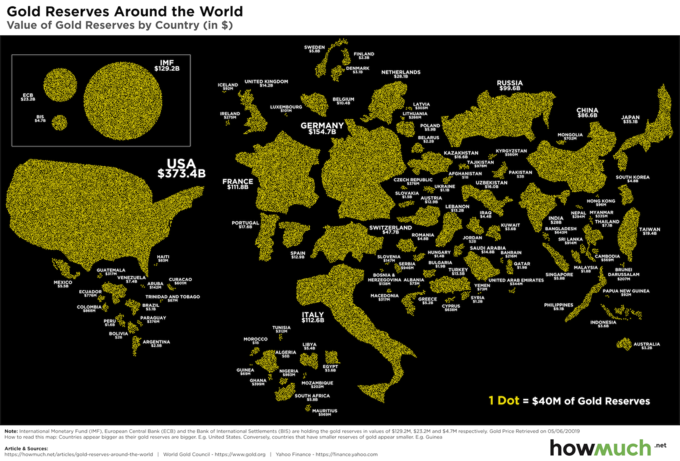 Advise by investing professionals to private investors is "gold provides insurance for your portfolio, and we believe that most people should probably allocate around 5%-15% of their portfolios to gold or gold-related investments." [4]

Beginning in November 2020, the central bank of Uzbekistan started to sell sealed gold bars with a QR-code for real time verification, to stimulate gold use as a store of value and promote the circulation of gold. [5]

Yamashita's gold, also referred to as the Yamashita treasure, is the name given to an alleged vast collection of loot stolen in Southeast Asia, by Imperial Japanese forces during World War II. Hidden in caves, tunnels, underground complexes, or just underground in the Philippines, it was named after the Japanese general Tomoyuki Yamashita, and reportedly fell into the hands of members of the newly formed CIA, who used it to kick start the US Deep State.[7].

In 1948, the president of the Kuomintang (KMT) government, Chiang Kai-shek, was losing the civil war in northeast China against the Communists. He began planning a retreat to Taiwan and to take the national gold reserves with him. When the removal became known, it lead to a total collapse in the Chinese currency and a bank collapse. Estimates of how much was moved differ between sources, ranging from between 113.6 and 115.2 tons.[8] Since 1949, Taiwan also has been a safe haven for superrich overseas Chinese who dominate the Southeast Asian economies to keep their wealth offshore, a big part of it in gold.[9]